I love this holiday! The costumes, the treats, the spooky stories, I love it all! Best, of course, are the tales of the dead coming back to life! (wooo-oooo-oooo!) So, naturally, my first Anime Review just has to be something I can tie to the holiday, and I chose Ghost Hunt!

As the title suggests, this 25-episode anime, airing in October of 2006, chronicles the adventures of a group of ghost hunters, namely Shibuya Psychic Research and their friends. The company is headed by teenager Kazuya Shibuya, who possesses a keen, focused mind, extensive knowledge of his field, and an ego that could sit on top of Japan and make the whole nation simply disappear beneath it. He is assisted by Lin Koujo, a tall, stoic man of considerable ability, and Mai Taniyama, a teenage girl with a tender heart and developing clairvoyant abilities. It is from Mai’s perspective that we explore this tale of ghosts, psychics, and curses, as she tells the story in her own words, and it is she who dubs Kazuya with his nickname, Naru, in honor of his narcissism.

They are joined in short order by spiritualists who become their friends: Hosho Takigawa, called Monk in honor of his quasi-status as a Buddhist monk of considerable power, Ayako Matsuzaki, a self-styled shrine maiden, John Brown, an Australian-born Catholic priest and exorcist, and Masako Hara, a well-known spirit medium, as well as Osamu Yasuhara, not a spiritualist, but a student and good friend whom they meet during one of their cases, investigating paranormal phenomena at his school.

There are just over half a dozen story arcs in the anime, varying a little in length. The shortest is only one episode (and, with a certain morbid sense of humor, hilarious) and the Christmas arc is two episodes, with the rest being three or four episodes long. With each arc, we are introduced to a new case, taken through its twists and turns, and finding a resolution. Each one follows a similar formula, but with differing ingredients. Sometimes they are dealing with legitimate ghosts, sometimes with the activity of latent psychic powers, sometimes with hostile psychics, or even monsters and, the last arc, a “god” of sorts which has been twisted by a curse.

The drama can be a bit overdone at times (I say with my mastery of the understatement). This is particularly true when the creators are apparently going out of their way to make it seem like Naru is going to do something horrible to end the case and someone, typically Mai, speaks out against it. Then it turns out Naru knew what he was doing all along and never intended to hurt anyone, he simply did not explain himself. Thankfully, they only did that twice. Similarly, though, is when there is a who-done-it “mystery” which the audience solves in about ten seconds, but it takes the characters forever to figure out. There’s a school girl everyone assumes is guilty, but we figure out almost immediately that it’s her teacher who is guilty, and just sort of wait around for the protagonists to do the same. So, not much as a mystery show. 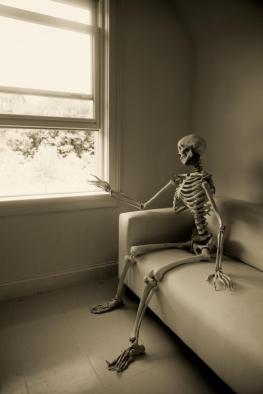 “I waited so long for a real mystery, I didn’t notice when I became a skeleton…”

That said, even when the drama is being overdone, the voice acting, for both the original Japanese and Funimation’s English dub, is fantastic! Cherami Leigh’s performance as Mai is my personal favorite, and I’ve been a particular fan of Leigh’s work ever since. Even when you roll your eyes at how slow these people are, the acting keeps you riveted. You cannot stop watching.

It’s also not much of a scary story. I tend to shy away from scary movies and anime, but there just isn’t that much suspense through the majority of Ghost Hunt. That is, until the second to last arc, “Bloodstained Labyrinth.” That one managed to terrify me. Perhaps it was the elements of western vampire stories, like Dracula and Elizabeth Bathory. Perhaps it was the realism of the story which unfolded, one of so many innocent people being murdered one by one at the hands of a petty man who quivered in fear of death. Perhaps it was how this danger was both more subtle and more keen than previous apparitions our heroes had faced. Maybe it was something else altogether, but this arc scared me so bad I needed to watch something much less frightening (Gundam Wing, as I recall) before I could get to sleep.

(hilariously, I managed to watch that arc the very night my best friend and roommate, very big and strong and I always knew I was safe around him, had moved out, and let’s just say I was keenly aware of how he was not there, LOL) 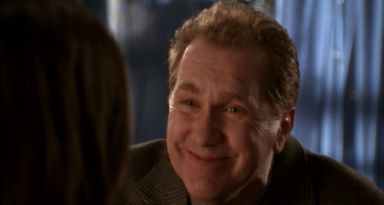 “You gotta keep a sense of humor about these things!”

I particularly enjoyed how this anime explored supernatural lore, albeit superficially. It was explained from an academic perspective, but also in ways which related to the case and how to navigate the dangers of it. We see various schools of spiritualism on display, including Budhhism, Shinto, Catholic exorcism, mediums, clairvoyance, and onmyoji, and it was a treat for me to see them all mixed together and all on the same side.

The best part is the characters themselves. With varying senses of humor, things they like or dislike, each with their own story we get little glimpses of, they are all so sweet! Through all the fear (particularly in that one arc) and pain, our characters find hope, love, and joy. In short, they become a family of sorts.

And the soundtrack is astounding! Creepy and nerve-wracking at times, calm and serene at others. In one very-appropriate word: the music is haunting.

Though the drama can take itself too seriously at times, there’s really only one major complaint I have about this anime: it doesn’t finish the story! I hate when they do that! And the real kicker is that, apparently, the anime stops just short of the manga’s ending! Soooo close! Come on! Don’t leave us hanging like that! Just one more arc! We were about to solve the mystery of Naru himself!

That being said, I can still enjoy this anime from start to finish. While it may be a bit shaky in several areas, it still stands as a well-done anime.

Overall, I’d give this one a B, so a good 8 out of 10. Not a contender for “favorite anime,” but I still recommend this one.

And on that note, go out and enjoy some trick-or-treating!

This entry was posted in Anime and Cartoons, Tuesday Review and tagged Ghost Hunt, Ghost Hunt Review. Bookmark the permalink.