I’ve forgotten exactly how I was first introduced to Lindsey Stirling’s work, but I liked it right away. See, whenever I’d thought about violinists, I’d seen this image in my head of some fancy-dressed statue rooted to the ground it stood on, incapable of movement except one arm for the bow and one set of fingers to hold the violin’s strings in whatever position. When I saw this young lady playing a violin while dancing, it was like realizing that something I’d thought was impossible was, in fact, possible. It may be silly, stupid even, but the wonder I felt at that moment might rival the wonder people felt when we first set foot on the moon.

Even more, she wasn’t just doing a series of fancy-but-precise movements. She was taking on the role of a character, and displaying that character. She was displaying her soul.

That is what music is all about.

So, yes, she made a very good, strong first impression. I have enjoyed her music thoroughly ever since, both her covers of well-known favorites and especially as she’s been creating her own music, composing new works. This is not an unimpressive thing to do when you have to center it all around a single instrument, instead of having an entire orchestra to work with. I’ve seen many who had the latter at their disposal and created only derivative, repetitive works, yet Lindsey Stirling can make something fresh, new, and engaging to our imaginations. Yes, she does have other instruments at her disposal (including a very pretty voice), but that does not make it any less impressive.

That’s not to say it can’t get tiring after awhile, having every single song include the violin as its center. It’s like having the same actor playing the same lead role in every single film. No matter how different the movies are, eventually you want to look at someone else, or some different character for a bit. But one can enjoy a little bit every single day, and a marathon every few months.

Keeping that in mind, I found myself wondering about her concerts. If they were nothing but a dancing violinist for one or two hours at a time, then I fear I would find it boring. However, I tend not to like live concerts that much anyway, as they are too crowded, too loud, and have too many lights flashing in my face. So to make a live concert worthwhile for me is really quite an accomplishment, and I have exactly one criteria for such: the artist much engage with the audience. They must draw us in and keep us entertained, make us smile, laugh, etc. It may be their concert, but it’s all about us. (a fact which some stars, such as Miley Cyrus, seem to be utterly unaware of)

Really, it’s the same thing with music as a whole. The best songs are those which draw us into them. However, a single song lasts for mere minutes, and an album typically doesn’t go beyond an hour. While the latter might be quite a bit longer, it can be paused, stopped, left and returned to later. A concert, by comparison, tends to go for at least an hour, costs money to attend, and cannot be paused. It’s an entirely different world, and I’ve seen musicians get up and just deliver song after song like its an especially-long album, and it’s boring. Even if they hook me at first, it goes so long that I’m relieved when it ends. In my opinion, it’s the concert which is the most difficult thing to do, and doing one well, engaging the audience throughout, is a worthy achievement.

So, how does Lindsey Stirling, the dancing, hip-hop violinist and YouTube sensation, do in a concert?

Alas, I cannot say from personal experience, and attending a concert in person is not something one can just do at any moment, short of developing time travel. Fortunately for us, we live in the future, with the marvel of modern technology called the internet. And YouTube. I searched for ten seconds and found some videos. As they are not official videos produced by Lindsey Stirling, I shall refrain from posting the links, but feel free to do some searching yourself. 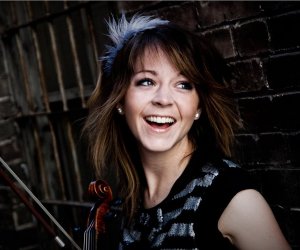 Now, there is the obvious disclaimer, this is viewing things second-hand, something that someone else recorded, and not professionally. That said, I think I would actually enjoy one of Lindsey Stirling’s concerts, and that is saying something.

It is true that her performances can be largely, and ungraciously, described as “dancing while playing the violin, over and over.” It is also true that hearing the violin straight for an hour and a half can be a bit much, but that feeling does not linger so long it becomes uncomfortable. There is a variety to be found, both in the music itself and in how it is presented. Lindsey Stirling is the star, but she has co-stars around her, adding to the music, adding to the dance, and I can tell well-crafted stagecraft when I see it.

Even more, it’s not just the music and the performances which are engaging, its the artist(s). Lindsey talks to the audience, with the audience, and clearly has a thriving sense of humor as she pokes fun at herself and her occupation, all in good fun. Example: she does what good artists do, sharing a moment important to her, when she saw an artist who inspired her with an on-stage costume change, while her crew is changing her costume on stage, and acting like she’s trying to act unaware, as if the audience couldn’t possibly be seeing these four people adding a florescent layer to her costume! (“oh, don’t mind us, we’re invisible”) She has the audience, including myself, cracking up with laughter!

So, yes, while concerts are not my thing, I think I would enjoy one performed by Lindsey Stirling!

As a final note, with her beautiful music and her skill for putting on an enjoyable concert, there is one more thing worth commenting on, and that is her motivation. What got her into all of this in the first place?

I am not one to tell other people’s stories for them, and I’ll leave Lindsey to tell her own story in her own words, but to greatly summarize what I understand of it: she has always loved music, and after going through a difficult time, her music is now a song of joy and hope, sent out to lift people’s spirits as it lifts her own. She simply seeks to do some good in the world.

What more worthy motivation could there be?

I hope she reads these words someday, because she is an inspiration to me, and I’d like for her to know that. I love her music, her performances, and even her motivations. This, right here, is a truly, absolutely, genuinely beautiful woman. Not just physically attractive, though she is certainly that (and what great hairdos!), but beautiful. 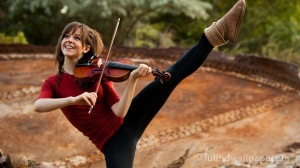 And it’s plenty evident, with her wide, international audience, and all the artists who collaborate with her, and a crew which clearly respects her, that I am not alone in this sentiment. Lindsey Stirling is an inspiration. The world is her stage, and I look forward to seeing her dance all over it.

So go visit her site, here.

And a few of my favorites:
Some of her original works:
Crystallize
Electric Daisy
Elements
Master of Tides
Shadows
Spontaneous Me

Some covers:
Good Feeling, the video is titled “Just Dance 4” but the song is “Good Feeling.” (I mentioned her beautiful voice, right?)
Lord of the Rings Medley, covering music from the trilogy (remember that beautiful voice?)
My Immortal, covering the song by Evanescence
On the Floor, with a little display of Lindsey’s happy humor
Zelda Medley, cover of popular songs from the games

And, heck, Christmas is upcoming soon enough!
Oh Come, Emmanuel, a Christmas cover collaboration with Kuha’o Case, who has his own inspirational story to share with us
Silent Night, without the words (yet again, beautiful voice!)
What Child is This

This entry was posted in Muse-ings and tagged Lindey Stirling. Bookmark the permalink.