The Lord of the Rings trilogy! Complete with its prequel, the soon-to-be-complete trilogy of The Hobbit! Hands down! No contest! 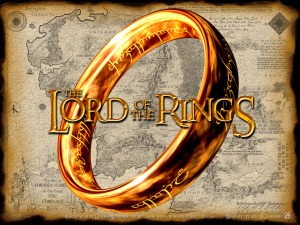 Heh, it probably says something: I had to think for awhile before picking my sci-fi Top Pick, but only a millisecond to choose my fantasy Top Pick.

I want to give an honorable mention to The Chronicles of Narnia. Excellent movies, I enjoy them very much, but while Narnia may be a contemporary of Middle-Earth, much as Lewis and Tolkien were, the former lacks quite the inter-movie storytelling of the latter. Besides which, the Narnia movies were made possible by the fantasy resurgence The Lord of the Rings helped to ignite.

I love pretty much everything about Lord of the Rings. An epic tale of good vs evil, the collision of great powers, or armies, with diabolical servants of the dark and valiant warriors of the light, all revolving around one, single, tiny ring and the halfling who carries it through danger and despair, to destroy it. The heroes, the villains, the monsters, the battles, the theme, the greatness of one small person who accomplishes one simple task. These films are a masterpiece of storytelling.

And that’s just the story! Everything that went into making these movies, including the actors, the director, all the production staff, the techniques and technology, the revolutionary idea of making all three films simultaneously, the composition of the soundtrack, the design of all the monsters and cities and landscapes and cultures, the cinematography, everything combines to make these films a cinematic masterpiece.

Yes, there are flaws, often rather hilarious ones when you think about it. And I do get a little irritated when only a handful of eagles show up at the last battle, as the novels included hundreds of them. But I can forgive these. Translation from novel to movie involves a bit of adaptation, and I prefer the movies to the novels. (reading Tolkien is a test of endurance, watching Jackson is downright fun)

And, frankly, I had a great deal of fun watching these movies. Having read the books, I was asked by my mother if Aragorn and Arwen end up together. I answered, with a grin, “Maybe.” For two years. 😀 When Aragorn turned down Eowyn in Return of the King, my mother went, “Yes!” And I commented on now he just had to survive, and they had to win the battle, and they had to win before Arwen died, and… (she whacked me in the shoulder at that point, and I cackled).

Yes, I am evil! Heheheh!

I think, while these movies are masterpieces, it’s that personal enjoyment of mine which makes them my favorites. It’s an entirely personal, subjective thing, what your “favorite” thing is. My favorite color is red because I’m a redhead. My favorite food is lasagna just because. My favorite music is Celtic because it is an enjoyable inheritance from my ancestors. And these are my favorite fantasy movies because they are masterfully-crafted movies, with great characters and a great story and theme, and great music, and they pushed the boundaries of what was possible, and so many other reasons.

And I had a ball watching them. 🙂

This entry was posted in Favorites, Movies, Top Picks and tagged Lord of the Rings, The Hobbit. Bookmark the permalink.