I am not well known for liking “Drama” nearly so much as I like “Action!” This holds particularly true in the case of chickflicks, but it’s true for most other dramas as well. However, there are still some dramas that I like. My favorite, hands down, is The Bucket List.

Starring Jack Nicholson and Morgan Freeman as a pair of men who find they have terminal cancer and end up sharing a hospital room, The Bucket List follows the pair as they deal with their impending deaths. The title, for those who’ve never heard the term “Bucket List,” comes from a list people write, filled with the things they want to do before they die or “kick the bucket.”

Edward Perriman Cole (Nicholson) is an obscenely rich health-care tycoon, divorced several times, a loner, highly interested in young, beautiful women, and he loves being – there is no other word for it – an asshole to everyone, particularly his assistant. Edward also has a thing for giving people names, such as when he calls his assistant Thomas when his name is Matthew, or calling his legal aide Jim and Phil when his name is Richard, or when he eventually called Carter (Freeman) his “main man Ray.” Not to mention he loves drinking the most expensive coffee in the world.

Carter Chambers is a black man of humble circumstance, calm and respectful of others. He loves history and sharing his knowledge, and wanted to be a history professor, but the need to provide for his family came first. He’s spent four and a half decades fixing cars in an autoshop, working his butt off so his children could have their necessities, and things they want, and an education, etc. He’s a family man, and has never been with any woman other than his wife.

First meeting: they both say, “Who the hell are you?” 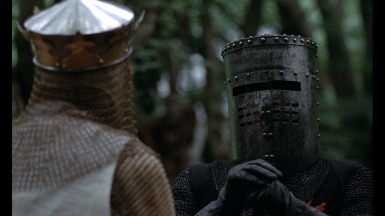 Yet, as they undergo their treatments and are forced to spend a great deal of time together, they start talking, learning about each other. They begin to bond, finding that they complement each other quite well. Then Edward learns that he has only six months to live. In a moment of selflessness, he has his doctor find out what Carter’s status is, as he’s been trying to learn this from his own doctor, and the news is the same: six months. These two men find themselves in mutual need of, and mutually giving, the same support.

The next morning, Edward finds a piece of paper on the floor, and finds that it’s a “bucket list” that Carter was working on the day before, but discarded. (poetic, falling and getting picked up, which these two men do in turns throughout the movie) Edward starts adding to it, even while they argue over the assembled list and what to do with it. Edward thinks Carter’s items are “weak,” as they include “helping a stranger for the good,” “laugh until I cry,” and “witness something majestic.” Meanwhile, Carter calls Edward shallow (“I have taken baths deeper than you.”) as his additions include skydiving, hunting lions, getting a tattoo, drag racing, and “kissing the prettiest girl.” (“How do you propose we do that?” “Volume.” LOL) Edward convinces Carter to stop fighting and come with him on a world-wide tour, to do exciting things, to spend their last months doing something. To Carter, the history professor trapped in a mechanic’s body, it’s something he can’t quite refuse, though the decision opens a rift between Carter and his wife, Virginia.

Not THIS bad, but still…

So off they go, having boatloads of fun, arguing and laughing, and having many a poignant conversation. Naturally, many of these include topics such as God, life, death, the lives they have lived, etc. Edward is estranged from his daughter, and Carter has lost his romance with his wife. So both become instruments in nudging the other man back towards their loved one. Edward talks to Carter a few times and eventually arranges for him to face the simple choice of whether or not to be with another woman, which inspires him to return to Virginia and their family. In response, Carter, in conversation and then in action, takes him to his daughter’s doorstep, but Edward refuses, yelling at him, ripping up their list, returning to a life of luxury, where he is alone, and more miserable than ever.

Just as Carter and Virginia have patched things up, and found romance again, his cancer strikes him down. Edward, now in remission, comes running, just in time to say farewell to his friend. They “laugh until they cry” together. Carter urges Edward, one final time, to talk to his daughter, which he does, and they reconnect. Edward even manages to “kiss the prettiest girl,” namely his granddaughter. And so Carter, posthumously, completes one of his items: “helping a complete stranger (which Edward was at the beginning of the film) for the good.” So Edward takes the list Carter repaired, and completes it.

Carter narrates the film, so it’s a surprise when he dies and Edward lives on, as Carter’s first words were, “Edward Perriman Cole died in May.” Then the lone figure we saw climbing up a mountain, as Carter ponders how you measure a man’s life, turns out to be Matthew, the assistant, laying his old boss’ ashes to rest alongside Carter’s, and crossing off the final item, “Witness something majestic.”

And finally, Carter’s final words of the film: “Even now, I can’t claim to understand the measure of a life. But I can tell you this: I know that when he died, his eyes were closed and his heart was open. And I’m pretty sure he was happy with his final resting place. Because he was buried on a mountain. And that was against the law.”

From start to finish, this film wastes nothing. Not one second is lost to trivial things. Everything is focused on the story, the characters, and especially the theme. It’s only an hour and a half long, but has the emotional intensity of far longer epics. It is, in short, a very well-told story.

What is the life truly worth living? What makes for a great man? The answer, both resounding like Edward and quiet as Carter is that the best life is one lived with the people you love, with your family, and the greatest men value this.

Everything reflects the questions and the answers. Two men from wildly different circumstances, portrayed by two of the best actors of our time, have their strengths and foibles, their struggles, their accomplishments, their disappointments… they are, in a word, human. They visit the pyramids, the Taj Mahal, the Himalayas, Hong Kong, France, Africa, and more, locations which evoke resonating feelings about life and death. They do this in the name of living, even in the face of death. We get a glimpse of the world before we go away. And this journey they take together guides the both of them to better lives, as they find healing for themselves and their relationships.

Also, they could not possibly have chosen a better song to end this film than “Say What You Need to Say,” by John Mayer.

In summary, this is an inspirational film, and a good one to help us all take a look at ourselves. I love it, and I always enjoy watching it, either alone or with my friends.