Movie Review: Into the Woods 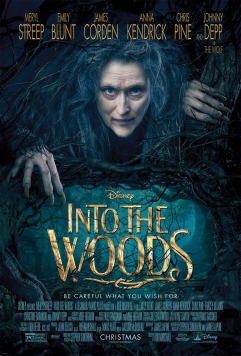 A magical musical with an all-star cast to tell new versions of classic fairy tales, including, but not limited to, Cinderella, Jack and the Beanstalk, Red Riding Hood, and Rapunzel, all at the same time. That was my first impression of Into the Woods, based on the trailers.

This was a fairly accurate, but doesn’t quite do justice to this latest Disney movie.

Based on the musical play written by Steven Sondheim, the stories told within are actually more true to the original fairy tales (as I recall) than I thought they would be. They just fill in a few gaps here and there with how the characters interact with each other. Indeed, from the very beginning, we have a story told on multiple fronts, following Cinderella, Jack, the Baker and his wife, the Witch, and Red. Rapunzel and a pair of princes soon join the cast as well.

On a side-note: I was wondering why Johnny Depp, of all people, didn’t figure more prominently in the trailers as the Wolf, but that made sense soon enough. And let me just say, he holds his own with the rest of the cast despite having barely five minutes of screen time. Impressive. But I’ve already digressed: the film follows the adventures of the main cast on their overlapping, intertwining journeys through the woods.

Each of them has something they want, something they “wish” for. These seem to be perfectly harmless things to wish for: to go to a ball, to have some sweets, to have a baby, etc. Harmless, right? But in getting what they want, they collide with each other, sometimes doing less than savory things. In short, they lose their proverbial way in the woods, and begin to discover good and bad things about themselves as they try to find their way again. They start changing in ways they never expected.

Most of them get what they want at some point, but then they find out a simple truth: there is a cost. The quickest, simplest, and earliest example of this is the Wolf, who gets exactly the meal he desires, swallowing both Red and her grandmother whole in succession, but as he lays in sated stupor, the Baker comes by and cuts him open. And Red gets a new wolf-skin coat. 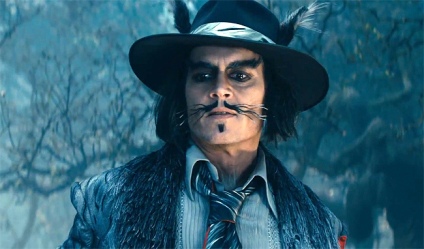 “Not quite what I had in mind when I had “having her wrapped in my flesh” in mind.”

Others find similar lessons awaiting them as they get everything they desire, everything they wish for. In fact, there is a moment when it seems they all have their happy endings, and then tragedy strikes, and it’s all taken away, along with everything they most loved out of everything they already had. Worse, this tragedy is the culmination of all of their wishes and efforts and mistakes coming together in a perfect storm, and their doom rumbles through the ground. In the midst of this sorrow, their differing perspectives allow them to ask questions, difficult and deep, and they never find a simple, clear answer. Very much like life.

It’s that exploration of consequence which most elevates this movie from just “good” to “great.”

It occurs to me that the story of Rapunzel and her prince is unique in this movie: they did get their happy ending as advertised, but they got it after paying the price, instead of having it come back to bite them later. 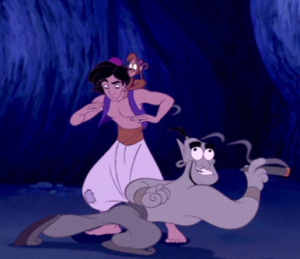 No substitutions, exchanges, or refunds!

The people behind the camera described the show as something that isn’t just a musical, just a comedy, just a drama, but combining them all together. That is very true, and I found myself loving the characters, the story, the themes, the questions this movie asks, and, of course, the music! I am definitely going to own this movie!

I also want to own the soundtrack, but I find myself in a bit of a quandary there, and this is my only real complaint related to Into the Woods. See, for some reason, on both iTunes and Amazon, the mp3 version of the soundtrack has the very first song (some fourteen minutes long, sets up the story, and quite enjoyable) marked as “Album Only.” Meaning it can only be bought on the physical CD, which rather negates the point of purchasing the digital copy at all.

Disney, what are you thinking?!

Up to this point, particularly recently, Disney has been rocking the scene, so this decision makes no sense to me. Was it really Disney that decided this, or the people on iTunes and Amazon and such? Either way, it sucks, and irritates me so much that I really want to not buy the album and support this particular idiocy. Though that sentiment will likely lose, in time, as I really want this soundtrack.

(EDIT: I was mistaken. “Album Only” just means one must purchase the entire digital album to get said song, rather than purchasing and downloading it individually, separate from the rest. My apologies for spreading my misunderstanding. Disney still rocks!)

Outside that one issue, I find I love this movie. It’s very enjoyable and deep, asking poignant and powerful questions, with lovable characters we can relate to and believe as their decisions drive forward a complicated web of plots and subplots.

I definitely recommend Into the Woods!

This entry was posted in Movies, Tuesday Review and tagged Cinderella, Disney, Into the Woods, Jack and the Beanstalk, Rapunzel. Bookmark the permalink.