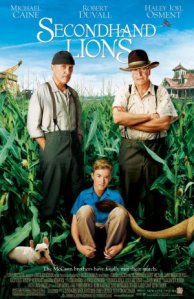 Ok. I admit. I just made up which category to put this one in, because it’s just so good that it must be among my most favorite movies of all time.

Secondhand Lions is a simple movie, with a simple story, yet there’s so many things I love about it, I can hardly think where to begin.

Walter Caldwell, fourteen years old, is dropped off to live “for the summer” of 1962 with his great-uncles Hubb and Garth McCann, a pair of old, shotgun-toting bachelors, living in the middle of nowhere. For the whole of his life, Walter has suffered the deceitful, irresponsible behavior of his mother, Mae Caldwell, as well as the hypocritical treatment of their relatives, who put on airs of good, Christian character, without one ounce of real morality or good sense to back it up. Mae wants Walter to do what their relatives are trying to do: cozy up to the old men, who have reappeared in America after more than forty years overseas, in order to get at the great fortune they’re rumored to have hidden away somewhere. The only difference between Mae and the others is that Mae is perfectly willing to take it while they’re still alive, while the others are hoping to be placed in the McCanns’ will, thinking they’ll be dead any day now.

With such role models as that, it’s understandable for Walter to be a bit skeptical and distrusting. He’s known little else, so he’s a bit at a loss of what to do with his uncles. They’re imposing figures, frank and honest to a fault, but not deliberately unkind. Rough and unyielding, perhaps, but “not so bad as they seem at first.” With such unyielding honesty staring him in the face, Walter comes to idolize Hubb and Garth, basking in their light, hungry for the honor they teach by example, and, most telling of all, he believes the wild, adventurous stories they tell, not just because he wants to, but because they ring true to the men who tell them.

Even when Walter has his doubts, he learns that some things are so important that they must be believed in, even if they aren’t always true: decency, honor, virtue, true love, that good always triumphs over evil, etc. Hubb and Garth live by these principles, and Walter emulates them by the end.

His uncles come to care as deeply for Walter as he does for them. In Hubb’s case, he has always been a warrior, and even fought a dangerous sheik to protect his love, the most beautiful woman he had ever seen: Jasmine. But when Jasmine died in childbirth, along with the baby, Hubb lost much of what he lived for, he lost his purpose. So he returned to the army, the French Foreign Legion which originally shanghaied the brothers during World War I. Now he’s retired, he doesn’t have a purpose anymore, and a bit of him longs for death, to see Jasmine again. But Walter tells Hubb that they would all miss him as much as he misses her. The boy Hubb didn’t want around at first has worked his way into the old man’s heart, renewing his purpose, and helping him live again, as opposed to just surviving one day after another.

They really are a family that was thrown together by things beyond their control, the selfishness of Walter’s mother, who come to care for one another. They have adventures together, including the impromptu adoption of an old lioness (the titular “secondhand lion”), originally bought so the uncles could kill it as a trophy. They learn from each other, improve and add to each other’s lives, and just come to love one another as family should.

I believe my single favorite part is just how this is the story of Walter as he begins learning what it is to be a real man, a mature, honest adult. Would that every child had that, because every child needs it.

This entry was posted in Favorites, Movies, Top Picks and tagged Secondhand Lions. Bookmark the permalink.