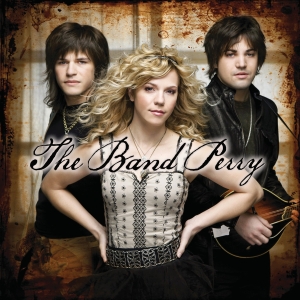 You know that feeling? That one where you meet someone for the first time, but soon enough you feel like you’ve known each other forever? That’s what it was like for me when I first started hearing The Band Perry’s music here and there, on the radio, in the mall, on a friend’s computer or iPod. It was like meeting an old friend for the first time. I could swear I’d heard it somewhere before, long before it could ever have been produced. But old or new, I liked it.

Kimberly Perry and her brothers, Reid and Neil, are a potent trio of country rockers, mostly with the “country,” but with a definite rock influence found in their music. Kimberly takes the lead in vocals – and, as gorgeous as she is, I guarantee a certain percentage of the population has their attention focused solely on her – but Reid and Neil provide smooth backup vocals. Between the three of them, they also play the piano, guitars, an accordion, drums, and the mandolin. So, each one is talented, but together, they’re phenomenal.

And kudos for three siblings who manage to work together, and in the music industry, without killing each other. 😉

I have been wondering for a bit, now, exactly what makes these three so great and popular. They’ve produced a total of two albums since they formed an official band together in 2009. That might be a reasonable rate of production, similar to other popular country artists, but when I think about two albums, it’s not so impressive. They’ve only just gotten started, yet they’re showcased in the country music community right alongside Taylor Swift, Lady Antebellum, Little Big Town, Carrie Underwood, Keith Urban, Brad Paisley, Miranda Lambert, Rascal Flats, etc. (I apologize to the artists included in “etc.” but I had to stop somewhere)

With such distinguished company, I can’t help but think, “Why? How?” Heck, the Band Perry was among that company in the 2012 CMA Christmas special, before publishing their second album (as well as a number of other appearances, including but not limited to American Idol and Dancing With the Stars). Yep. With one album under their belt, they rocketed so far up so fast that they were singing alongside the ruling legends of country music. Which just boggles my mind.

After a good deal of thought, I have decided that, at least in part, the answer is very simple.

With one album, now two albums, to their credit, Kimberly, Reid, and Neil produced music which resonates with their audience, with us. We enjoy their music because it has a good beat, a beautiful voice, and it conveys emotions most of us can identify with. They do this simply by being honest about their own feelings.

They make good music, and just strike the right chords in our hearts. And we love it!

A few examples, and favorites:
If I Die Young is about the heartbreak of that most inevitable separation, and finding some comfort and peace in the face of that sorrow.
Done is a sassy comeback to the folks who toy with another person’s heart. Sooner or later, we’re done with them.
Better Dig Two is the proclamation of undying devotion and commitment. This girl’s good for one such commitment in her life.
Chainsaw is… well, ya know how getting over a bad break up sometimes involves burning the bridge behind you, by destroying the mementos of the ruined relationship?
Don’t Let Me Be Lonely is the simple plea of one human to another, born from our simple, primal need for other people to love us and help us be strong.

This entry was posted in Muse-ings and tagged Band Perry, The Band Perry. Bookmark the permalink.