Why I Hate the “Fan” Made Power/Rangers 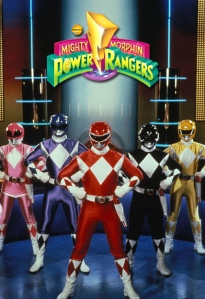 When I was a child, I, like most of us, had my favorite TV shows. They typically featured fighting and explosions, battles between clear, defending, noble heroes and clear, invading, diabolical villains, always resulting in the good guys winning. These included Teenage Mutant Ninja Turtles, Thundercats, and, of course, Mighty Morphin Power Rangers (and the subsequent incarnations of the Power Rangers franchise), among many others.

I enjoyed all of these as a child but, were I to go back and re-watch them, I’d probably go bonkers for the sheer, tedious, over-dramatic stupidity of them. Yet, these are still part of my favorite childhood memories. They taught my childhood self a great deal about friendship, loyalty, responsibility, etc. The format for these lessons may have been simplistic, to put it politely, but I still hold the lessons themselves as something dear and precious.

Recently, there’s been a bit of a hullabaloo over a bootleg “Power/Rangers” (with a slash) one-shot short film made by some fans, Adi Shankar and Joseph Kahn. It departs a great deal from the original material. Naturally, I was curious, so I found it online, watched it, and let’s just say it comes as no surprise that they’re being sued by the people who actually own the franchise. Between infringing on their copyright and the cussing, drugs, and graphic, bloody violence… well, I probably would have done the legal equivalent of dropping a nuke on them. 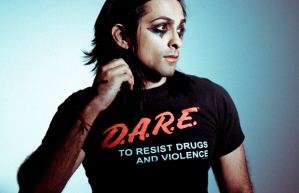 A most ironic shirt, considering the content of his film.

Shankar, pictured to the right, talks about how he watched Power Rangers as a kid, like many of us, and liked it. But as he got older, he thought about what he’d seen, and started applying the adult rules of the real world to the fictitious children’s show.

The result makes me not surprised when I find out he’s apparently gothic, judging by his look.

Something about pretty much all kids shows, both from when I was that age and those being made today: if you spend an inordinate amount of time analyzing, nitpicking, and applying real-world rules to it, it will quickly become something twisted and terrifying. This is because it’s not designed to be realistic. It’s designed to entertain children and teach them very simple lessons about right and wrong. If a child’s inspiration to become a hero, or even just a good person, begins with something they watched as a child, then I find both the intent and the results to be well worth the effort of making it.

And that’s the idea behind such shows as the legitimate Power Rangers: to help children, to shed some light into their lives. Is this not a noble pursuit? The adult world may mock everything about Power Rangers and similar shows, but I admire them. I may not be able to watch them now, but I do admire them, and the motivation behind them.

“We are utterly corny, and we do not care! HYAH!”

So what’s so bad about Power/Rangers? With a slash.

It takes the innocence of a kids’ show and completely corrupts/destroys it.

I don’t know if the people who own the original franchise would or would not have sued over this “deboot” bootleg if it preserved that innocence, but that is a moot point now. It really, really, really doesn’t.

First of all, it takes the premise of an alien being recruiting some high school kids to fight an evil alien invader with advanced weaponry and martial arts, and applies the rules of the real world to it. I mean, only a being with ulterior motives would use child soldiers, right?

Wait, the Power Rangers are child soldiers? I have to disagree with that.

They’re nearly grown adults, and every military in the world has used people of similar ages, often younger, throughout history. Even today’s definition of “child soldier” involves children who are several years younger than the Power Rangers, and not in any fashion which notably gives them a better chance to survive. Also, real-world villains and invaders don’t exactly send evil minions to invade a single city, one at a time, so the real-world rules obviously aren’t supposed to apply. For the Power Rangers, this is simply their coming-of-age story, where they were recruited by, yes, a benevolent alien being, and then they chose to defend their home. There are entire worlds of difference between that and what goes on, say, in Africa today.

So, this anti-childish film is based on something totally immature from the get-go: that there are no heroes and no moral high grounds. Doesn’t that smell of “moody teenager” more than “mature adult?”

They take the very same beloved characters of my childhood, and everything about them, and twist them around. We see a number of them, and the fates they meet in the end. Some died in battle, and one or two are still fighting the good fight. But more than one of the Power Rangers turned traitor and/or sell-out, utterly counter to the real show’s messages about friendship and loyalty.

All of the Power Rangers meet with terrible fates. Those who didn’t die in battle have now been systematically hunted down and murdered by their original foe, the witch from space, Rita Repulsa. After living corrupt, dirty, blood-stained lives. And there is much blood spilled. Graphically.

This was a kids show! And these people turned it into something dark and bloody, where good guys either die or turn traitor! They even took the designated comic relief, the bullies Bulk and Skull, and turned them into psychopathic killers! The heck?!

I suppose the offense I feel at this needs some better explaining than “they took something from my childhood and created an entirely non-canon take on it which is different and darker and depressing.”

Some time ago, I suddenly asked myself a question about beauty.

“If beauty is in the eye of the beholder,” I thought “Then what is beauty?”

When we think “beautiful” we often think first of the attractive qualities of the opposite gender, or, following that, some scene or piece of art. I was trying to figure out what that common thread is among all things beautiful which qualify them as “beautiful.” What is beauty?

Unable to find a firm answer, I rephrased my question to myself.

If I were to treat beauty like it were a physical property, something like “hot” and “cold,” then what would it do? What is the effect beauty has on us?

That answer came quickly: beauty uplifts and inspires us.

On the heels of that thought, as I was thinking in terms of the opposites of hot and cold, I wondered what the opposite of beauty is.

“Ugly,” was close, but it’s a descriptor, an adjective, not a noun. So what noun is the polar opposite of something with uplifts and inspires?

My answer: perversion, which I define as something which debases and degrades.

Whatever may be said about Power/Rangers with a slash in terms of creativity, imagination, acting, special effects, etc., all I can see in it is something perverse. Not “unpleasant to look at,” not “difficult to confront,” not “gritty and jarring.” Perverse. Something truly ugly.

Because it takes a kids’ show, meant to entertain, educate, and inspire, and degrades it into something bloody and violent, debases the heroes into twisted, dark shadows of their originals, and perverts it into something entirely antithetical to the real show’s intention.

That is something I find offensive on every level.

Call me crazy, but “fans” generally don’t take what they’re a fan of and use it to create its polar opposite.

The original Power Rangers might not be meant for adults, but it’s far more worthy of its existence than this with-a-slash bootleg.

This entry was posted in Discussion, What's New and tagged Power Rangers. Bookmark the permalink.

3 Responses to Why I Hate the “Fan” Made Power/Rangers