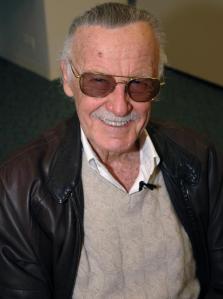 I have heard tell that there are three great golden ages of storytelling. One was in ancient Greece, in the days of Homer. Another was in Elizabethan England, the days of Shakespeare. The third is today, here and now, in the days of mass-produced books, music, cinema, and more. The days of Stan Lee.

Perhaps that’s a little melodramatic of me, but I have been known to do that on occasion, and I do not repent! 😉

I rush to emphasize that these days, this age, do not belong to any one man, but to many. Yet, looking at everything Lee has done within his ninety-some years, one cannot argue the strength of his influence on our golden age, nor the legacy he will eventually leave behind. (personally, I’m hoping he lives to be a hundred and twenty, at least) He is a living icon, the godfather of modern comics and all the media based on such! I mean, the man built up the shared comic universe that put Marvel and the Avengers on equal footing with DC and the Justice League, and there’s no way the latter has not been influenced by his work.

And the way Stan Lee accomplished this is fascinating. To put it in one, single sentence: he brought humanity into his comics.

Stan Lee began just as an assistant to comic book artists, keeping their inkwells filled, proofing their work, etc. He did help cultivate the original Captain America, among others, as he went for his dream of creating comics himself. Then World War II happened, he enlisted, he fought, he came home, he worked hard, got married, etc. In short, he was well acquainted with humanity and humility. Even more, he understood how important these were to the human condition, and therefore to our stories. So, when his boss wanted him to create a team of superheroes to try and compete with the experimental (and successful) Justice League, he began an effort, starting with the Fantastic Four, which the audience quickly latched on to.

I think the results may have surprised even him, and soon the doors opened for the creation of Iron Man, Spider-Man, the X-Men, and more, including the resurrection of Captain America. What made them so popular? Well, up until this point, superheroes were always portrayed in some idealized fashion, with no lasting problems, no demons to wrestle with, etc. They were just too far above humanity. Good for idolization, bad for relating to and learning from.

But now, suddenly, heroes could be people too! They made mistakes, had disagreements, suffered true defeats and losses, and learned hard lessons as they fought for a society which often did not accept them. This is best represented by Marvel’s single most successful character, Spider-Man, but it’s a common thread throughout a great many of Stan Lee’s creations.

Eventually, DC took a page out of Stan Lee’s Book of Marvel, and our heroes, by and large, became more complicated than blocks of stone. 🙂 And so did the villains! And the plots! And everything else! 😀

Despite his fame and his legacy, Stan Lee doesn’t seem to take himself too seriously. He is, after all, human, and he joins in poking fun at his work and the work of others with truly good-natured humor. Perhaps that is why he was able to lead the fight to overturn the tyrannical censorship laws of past decades. Looking for wholesome entertainment is all well and good, but the ideals once enforced upon comic books were every bit as fine and idolized and inhuman as the superheroes in said comics.

In short: if you want to delve deep into weighty matters… you gotta lighten up a bit! 😀

Now, there is a double-edge to this sword. True, we now have some superheroes who make mistakes so serious that they defy comprehension. And we have some pretty twisted stuff out there, when you think about it. But that is, I believe, a cost worth paying, for it comes alongside so many mind-boggling wonders!

In one month, I will be among the horde of people going to see the second Avengers movie, Age of Ultron, in theaters. Words cannot express my excitement! I suddenly found myself craving it back in early September of last year… and hated when I realized I had to wait eight months! But now seven months have passed, just one more month to go, we are almost there! Yes! Yes! Yes!

Stan Lee, I salute you!