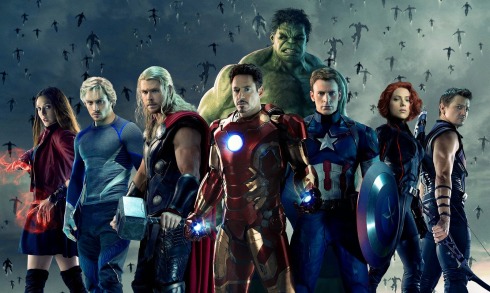 So, I hate opening weekends, and especially opening days, because I really hate crowds. I had no intention of seeing Age of Ultron until Monday. But then I was out and passing by the theater, and what can I say? Three years of anticipation and eight months of craving – that was a sad moment, when I found myself craving the next Avengers back in September – just got the better of me.

I am glad it did!

My initial reaction: THAT WAS AWESOME!!!

After a couple days to cool down from my fan-boy excitement, and a second viewing – yes, it’s that good, don’t judge me 😉 – I am ready to deliver my actual review, as opposed to just saying:

Though, as I think about it, that’s what I’m saying anyway, just a little more eloquently. And hopefully without spoilers! 😉 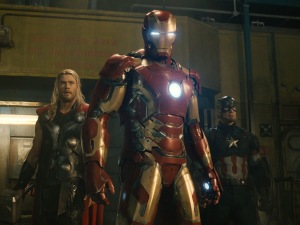 Flawless appearance, not so flawless beneath.

I think the one thing I like most about this movie is how human the characters are. To a normal person, the Avengers must surely seem like gods and monsters, and Age of Ultron takes that idea and runs with that. We see that, for all their power, the Avengers are people, with faults and failings and frailties. Within their own hearts and minds, every Avenger has their demons to contend with. Externally, these demons are given physical form in the shape of Ultron, but it is the personal level of their individual battles which make the actual fighting so awesome, as something more than just a bunch of superheroes exchanging super-blows with a supervillain.

On a related note, I really like how the characters all interact with each other. Among other things, it emphasizes their humanity, including their similarities and differences, but it also provides for countless snippets and one-liners.

It was a bit odd, I thought, for Black Widow and Bruce Banner to be coupled for this movie, but it also felt very understandable to me. Not only does she deal with the Hulk on a regular basis, which has got to be a very emotionally intense experience, but Banner really is quite different from the rest of the guys. She’s even able to empathize with him in regards to the burden he carries as an involuntary destroyer.

Speaking of the Hulk, I love what they did with him, both in his monstrosity and his less-aggressive moments. I could be wrong but I think we just saw something other than blind aggression, or even protective aggression, for the first time in the Hulk. I know there’s no movie planned for him in Phase 3, but I’m really hoping Phase 4 could have movies for Planet Hulk and World War Hulk, which would be an awesome Avengers movie! But, I veer into fan-boy speculation. My bad! 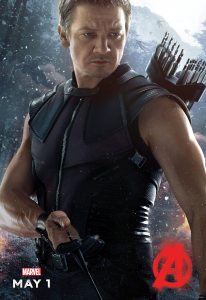 It feels perfectly natural as Hawkeye becomes a much more fleshed out character in this movie. The poor guy was a background character in Thor, he got the short end of the stick in Avengers, and we haven’t seen him since. Now he finally comes into his own, not only as a worthy Avenger, but as a normal man – I use the phrase “normal man” lightly for an archer of his caliber – and, in a quiet way, the strongest of them all. Sure, they could all level buildings if they so chose, but Hawkeye is already doing something much more difficult on a daily basis. Compared to what he’s doing, annihilating a strong, well-armed artificial intelligence that possesses many, many bodies is downright easy.

I don’t think I’m spoiling much when I mention the twins, Quicksilver and the Scarlet Witch, becoming Avengers. I mean, the trailers showed that to us plain as day. These two are the very first people we see in the film, and that is poetic. The first Avengers film shows how the Avengers became the Avengers. Similarly, Age of Ultron shows us how the twins become Avengers, and how the team generally expands and evolves, with a rotating cast instead of a fixed one.

I also like the clear connections this movie has with everything before and after. Among other things, we see…
The extension of Iron Man’s idea for multiple suits piloted by Jarvis, which saved the day in Iron Man 3.
Loki’s scepter from Avengers, and how it comes into play in the grand scheme.
Captain America holding to the same truth which pit him against Hydra in The Winter Soldier, that you cannot end a war before it starts without shedding innocent blood. Oh, and the end of Hydra (I really hope!)
Klaw, who will appear as an/the antagonist in Black Panther.
A shadow of what it may look like in Captain America: Civil War when the Captain and Iron Man are on opposing sides. Though now that they created and healed a rift between the two heroes within this movie alone, I have no idea what they’re going to do for Civil War anymore.
The clear shadows of what Thanos the Mad Titan is after, namely collecting all six Infinity Stones, which will be the main conflict of the two-part Avengers: Infinity War.

A friend of mine compared the Avenger films to a television show, with Avengers as the pilot and Age of Ultron as a freak-of-the-week episode. A valid opinion, but I respectfully disagree. Running with the analogy of a television show, Age of Ultron is the mid-to-late-season episode that takes what’s happened thus far and thrusts us through the latter season towards the climactic finale.

Joss Whedon described directing this film as “a nightmare.” With no less than nine very different superheroes, their antagonist, and a host of minor, yet pivotal, characters, Whedon had a lot of juggling to do, integrating and intertwining their stories with surgical precision and artistic grace. All I can say is, if he can produce something like Age of Ultron and call it a nightmare, then I want him to have many more nightmares! 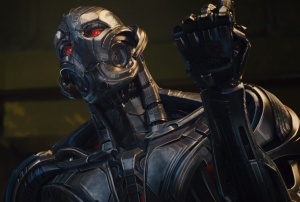 I recently put Joss Whedon among my Masters of Storytelling, and Age of Ultron is a masterpiece!

This entry was posted in Movies, Tuesday Review and tagged Age of Ultron, Avengers, Marvel Cinematic Universe. Bookmark the permalink.