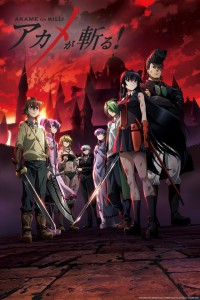 It’s my rule to give every new anime or television show one episode in which to either hook me or lose me. Though any title with the word “kill” in it makes me a little leery, I held to that rule when Akame ga Kill came out. I mean, with a name like that, which can roughly translate to “Red-Eye Kill,” or “Akame Kills,” or “Akame is Death” (translating can be a very tricky business), just how much more promising of copious death and destruction can you get?

Don’t get me wrong, I love action and violence as much as anyone else, but slaughter kind of turns me off, ya know? It’s not always the case, but I tend to dislike stories where everybody dies. It’s one reason I usually avoid the horror genre.

But, my rule is there for a reason, namely the many times my first impressions based on a name or whatever have been completely off-base. So, I sat through the first episode. And I kept watching. While my guess about the exceptionally high mortality rate proved even more accurate than I feared, both in the first episode and in the series as a whole, I was still entertained. In fact, I found it rather captivating.

It’s worth noting, before I take this anime apart, that Akame ga Kill was originally created as a manga, and the anime adaptation is very different from the source material. However, as I have not read said manga, I cannot really speak to those differences. For me, this anime stands on nothing more than its own merits, which, from what I’ve heard, probably works in its favor.

With that little disclaimer out of the way…

Akame ga Kill follows the adventures of a group of assassins, collectively known as Night Raid. As assassins, yes, they do kill people. In particular, they’ve been cutting a bloody swathe through the heart a magnificent, thousand-year-old empire. But there is more to the story than just, “They kill people.” It’s not what they do, by why they do it, and their methodology. 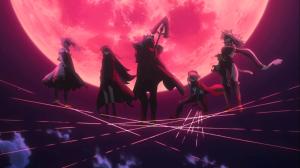 Who wouldn’t trust this lot at first glance, eh?

We follow the story mostly from the perspective of their newest recruit, a formerly-naive country bumpkin named Tatsumi. His first introduction to the group is colored by that ignorant naivete, but that soon changes. As it turns out, Night Raid is the covert arm of the Revolutionary Army. Their mission is to seek out and kill off the key figures who support a thoroughly rotted and oppressive government, in preparation for an all-out invasion of the capital. They do this by taking “jobs” from people who have suffered from the outrageous immoralities of those in power. Being pointed in the right direction, they investigate and gain firsthand witness of their targets atrocities. This is swiftly followed by the assassination, which brings some measure of justice to the capital, but also whittles away at the power of the corrupt higher ups in the imperial government.

In short, the world seems like a fantasy, even to those who live within it, but lurking beneath that thin veil is a dangerous dystopia, a vast, horrific nightmare that has everyone tightly in its grasp. 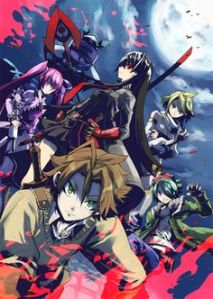 Akame ga Kill is, in many ways, a fantasy, but with strong elements of science fiction. It’s set in a largely medieval world, but with some very advanced technology, which is part of both the background story and the immediate conflict.

In short hand: some dude decided to found this empire a thousand years ago and, to ensure it endured beyond his death, crafted four dozen spectacular, highly-advanced and dangerous weapons, which came to be called teigu, or “Imperial Arms.” With these, the empire’s champions have annihilated entire armies, be they invading, uprising, or merely rivaling the empire’s power. One full eon later, this approach has mostly worked to preserve the empire as an entity, but anything built on that primeval belief, “Might makes right,” is doomed to fail in time. Indeed, the empire has now rotted from within, especially in its capital.

The overall setup of the story’s conflict is fairly basic. We have a vast history which is just barely referred to in passing, a world which consists of a handful of major powers vying for control of an empire, and a fairly clear distinction between which side is right and which side is wrong, though the latter does have some noble souls fighting for it anyway, for their own reasons.

The real entertainment here is the characters, mostly in Night Raid, but also in their antagonists. Everyone’s the hero of their own story, and this is no exception. The members of Night Raid are mostly people who have witnessed the empire’s evil and turned against it. Meanwhile the “anti Night Raid” group, called the Jaegers, is made up of people who serve the empire because, to their best understanding, it aligns with their own values and interests. There is more than one villain among the Jaegers, and the villains are best characterized as having a complete lack of feeling for their fellow man, but Night Right isn’t entirely upstanding either, when one thinks about it. They’re every bit as ruthless as their enemies. As one Night Raid member points out, they’re just two groups fighting for their causes in the shadows, and such battles are always painful. 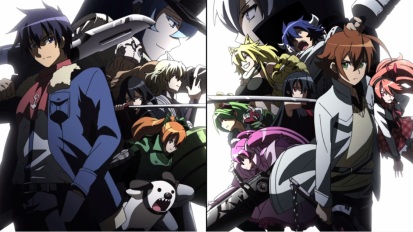 Both sides fight for their beliefs.

With a plot like that, there was a great deal of poetic symbolism in this anime. I won’t go into too much, as I don’t want to spoil everything, but the texture of events often resonated with me. I think my favorite example is the most triumphant moment of a woman who grew up in the slums, as she brings down a man who hurt a great many people. As a result of that suffering, she grew up in an environment where she grew quite strong and fierce, and gave the man responsible for her community’s suffering a brutal beat-down!

As I mentioned before, the fatality rate in this anime is high. By the end, I believe there are a total of six surviving cast members whose names we actually know, two of which are minor characters and another one of which was actually killed off in the manga. So, if that turns you off, you’d be better served watching something else, but I found something enthralling in these characters. They all faced death, and yet they lived to the fullest in defiance of that death. They all had their pasts, their hopes and dreams, the things they wanted to do if they survived. They laughed, and loved, and lived. 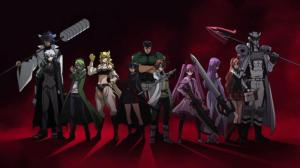 “We are the dead… but we really LIVED.”

That, right there, is probably the overall point of this story. Everyone lives, and the loss of life is a terrible burden to bear. Akame, the title character, doesn’t really get that much screen time in the anime (I hear that is a little different in the manga) but she is still alive in the end, and odds are she’ll be the very last member of Night Raid to eventually die. This story is about the people she’s lost, and the people she’s killed. History, as written by the people they fought for, won’t remember her comrades, but she will. To her dying day, she will carry the burden of their dreams, their lives, and their deaths. She will survive for a very long time. And she will kill evil men, those whose deeds beg for the Reaper to come and claim them.

In fact, there is one theory that Akame has actually become Death itself in the end. But that is largely speculation… albeit fascinating speculation. 😉 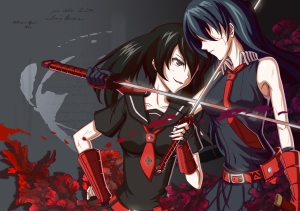 “You’re wearing that outfit in a fantasy story… you must die!”

Overall, I like this anime. But there are a few things they could have done better. For one glaring example: why, why, why, in this fantasy world, is the main hero, Tatsumi dressed like a schoolboy from modern-day Japan? It’s not like anyone else in his country village was dressed like that! Akame and two other girls are dressed much like schoolgirls, too, but at least Akame has a long, black coat at times, lending a more medieval flavor to her appearance. As a storyteller, that detail, inserting modern school clothes into a medieval setting, just made part of my brain twitch. This was just not consistent with the rest of the world and the rest of the story!

For another, slightly less aesthetic issue, they set up a lot of grand, potentially complicated conflicts. However, every enemy was taken down one at a time. It’s like they couldn’t manage to do several things at once, which most if not all of my favorite anime do quite well, so they chopped it up into pieces. It wasn’t a very graceful form of storytelling, belying the aforementioned poetic themes.

Basically: it’s a good anime, if you can live with a fatality rate which may utterly dwarf Game of Thrones, but it could have been a great anime, and failed.

Oh, and the soundtrack is pretty sweet!

This entry was posted in Anime and Cartoons, Tuesday Review and tagged Akame ga Kill, Night Raid. Bookmark the permalink.