Ok, I must immediately confess. I was so on edge during this episode that I could barely stand it. The tension was just too much! As a result, this one is a lot more blow-by-blow than my usual commentaries. This is almost as much commentary as that one Agents of Shield episode when they returned after the Agent Carter run. Gah! Sorry! 😉 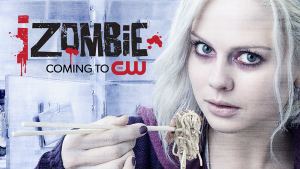 How do all those horror and zombie movies begin? With a bunch of kids being reckless out in the middle of nowhere? Yep. This is no exception, and the moment we saw that car full of kids hitting a wandering, zombified Sebastian… yeah, we all knew their fates were written.

This is why I usually hate the horror genre. Slasher features in particular. It’s just a bunch of screaming and dying.

But, of course, because this show excels at making us scream as they prolong the terror of unwitting kids dying horribly in screaming pain, they took their sweet time unleashing horrible, horrible death on the kids, even building up something akin to I Know What You Did Last Summer, giving us just one tiny, faint, glimmering hope that they might get away unscathed, and then mercilessly crushing it like a grape beneath their heel, all within the space of two minutes.

Oh, and the first one to go – surprisingly, it seems the other three actually manage to escape and survive because they flee in terror at the sight of the undead man murdering their friend – is the blonde, cheerleading bimbo who was trying to be just a little bit selfless. Named Kimber.

The people who make this show really love their horror, don’t they?

The bit of brain Sebastian didn’t eat is now Liv’s to ingest. Must give due kudos, here, to Rose McIver and her acting skills. I could be wrong but suddenly going into peppy, spirited, bimbo cheerleader mode, alongside every other quirk and personality she’s played this season, displays quite the range of characters she can portray. Also, I think this is the first brain to date which actually changes both her vocabulary and the timbre of her voice.

It’s also a very weird and obvious change after finding Hope the rat dead. Yeah, zombie cure is not going well after all. However, in the same ball park as the cured zombie rat dying, a cheerful Liv is also not normal.

As hilarious as the look on Clive’s face is, Liv channeling Kimber helps them get info out of her best friend. Which points them in the direction of a high school band, the AssHats (…I’ll just chalk that one up to “teenagers”), which includes the trio of friends who ran over zombie Sebastian, buried him, and then witnessed him murdering the cheerleader as they ran like Hell itself was on their heels.

Meanwhile, Major, who promised not to do anything else about Blaine and Julien and such until Liv has verified that the brains he stole are, in fact, human, goes back to the butcher shop, posing as a health inspector. Which gets him into the back area. Which, a few episodes ago, was a near death sentence for the unwitting Clive.

Insert tender moment between Peyton and a Kimbered-up Liv and Peyton. Very touching, and we can see why Peyton likes Ravi so much.

Clive figures out that the band isn’t telling them everything, so they go back to talk to them, and find one of them, Nate, dead. It doesn’t appear to have been a zombie, as the brain is still all there, but with Liv and Ravi on high alert and trying to take apart the mystery, Liv has another brain to eat, this time of a pothead punk instead of a cheerleader.

Just as Ravi is happy to have made a second zombie rat, Clive walks in and… um, kind of accidentally eats some brain. Ew. There are lines you do not cross, iZombie! There are lines!

Back to the case at hand, Nate apparently had conversations with the murderer. That would be the undead Sebastian. Who wants money? Well, I suppose when you need a lot of work done in order to look normal again… and at least he hasn’t gone feral, thus initiating the final zombie apocalypse which will destroy the world!

But wait… was Sebastian in any sort of mental state where he’d actually take a girl’s phone, and was he so broke that he had to extort high school punks for money? Fishy, something is.

Major apparently survived inspection, and is studying up on ways to kill zombies, when Ravi arrives back home. Insert moment of two cool guys talking about impressing a girl. Male bonding moment.

However, as Blaine and the butcher lady are talking about the health inspector, whilst Blaine is bemoaning a million-dollar loss, Julien realizes the “inspector” sounds very familiar. The crew is sent back out to keep searching for a needle in a haystack, while Major is buying big guns. And a grenade.

This does not qualify as “doing nothing,” Major!

Peyton shows up for spin class (I have no idea what that is) and finds Liv high, and she has a vision. And is disoriented and not herself and Peyton is hurt. Tender moment is caved in.

The girl in the band, Teresa, shows up and, having seen I Know What You Did Last Summer and being none to eager to join Kimber and Nate in the great beyond, tells the police how Sebastian the dead man got up after they buried him, killed Kimber, and drove off in their stolen car. The sketch artist, whom Liv has met before in a not-happy way, shows up to get a description of the killer, while Clive theorizes. If Teresa is protecting Cameron, the only other surviving member of the quartet, why come up with such a crazy story? A dead man coming back to life and killing Kimber?

About the only reason Liv doesn’t wear her fear on her sleeves is because she’s frickin’ high right then.

Major is preparing to go into the butcher shop, guns a-blazing…until someone pulls up behind him.

Teresa texts, ostensibly with Cameron, and leave the safety, however shallow, of the police station. Actually, a police station is a fairly safe place, but she already doesn’t really trust the cops and is on edge and will do whatever Cameron says, including “finding him before he finds us.” She’s relieved to hear from Cameron… so he’s been silent, then? I am sensing a trap, here.

Ravi confirms that there is another zombie out there, killing people, such as an elderly woman named Edna, and eating brains, which forces Liv to go back to cheerleader brains so she can at least descend from the stratosphere. Good timing, as Clive shares the picture of the killer, and Liv recognizes Sebastian. Cue the guilt pressing down as she realizes she accidentally made him a zombie and didn’t think to go back for his body, and reduce the brain to pulp.

Just as Peyton is getting ready for a weekend-date in San Francisco with Ravi… and Sebastian coming up behind her.

Liv arrives home to find Peyton unconscious and Sebastian cooking chili-fried brains, with an expertise gained from eating his Aunt Edna’s brain. The way he talks, it was a traumatic, involuntary experience, and even the monster has tears to shed for killing someone he loved, and who loved him. But Liv gives him no sympathy, stating, very simply, “I’ve never eaten anyone I didn’t want to eat.”

He screams, and they attack each other. Liv does fairly well at first, being as indestructible as her foe and more experienced as a zombie, but Sebastian is already high on zombie rage, so he drives her into a corner, and she has to rage out in return. At which point, she dominates. Whatever her injuries, she destroys Sebastian, finishing it with a knife driven through his skull, into his brain.

To her credit, even amidst shock and fear, Liv doesn’t try to dodge things. She tells Peyton the truth. All of it. Peyton absorbs this, but in her own shock and fear, she leaves, even before Liv can come back from the bathroom with peroxide for her cuts.

Plus side, Liv now knows how to sure-fire kill Blaine.

Meanwhile, Teresa shows up at the motel to find a room with blood splatter on the pillow and the TV on. Cameron doesn’t answer. She enters, and the door slams shut behind her. Which is a strong indicator in this show that she is dead.

Ravi waits for Peyton to show up, but she doesn’t. She’s in the wind.

Julien brings Blaine to the shop, showing him Major, tied up in the back. Major, the man who knows too much, including where to find the astronaut brains. Just as the interrogation is about to truly begin, Liv’s brother shows up to apply for the delivery boy position. When Blaine notices Liv is his emergency contact, he smiles wide and is ready to offer him a job on the spot. Which Major overhears and can do nothing about, no matter his horror.

Oh, and now he knows Blaine and Liv know each other.

Final scene: Teresa, not dead just yet but badly beaten and bleeding, is trying to get to the phone… and just… barely… manages to dial 911. Operator picks up… but everything is silent.

The season finale promises to be as gripping as an undead hand around your ankle.

I mean, we have the minor character Teresa bringing in the cliffhanger as she struggles for her life, Peyton finding out about zombies and disappearing, Ravi’s weekend with her gone up in smoke while having found a cure for zombies that kills the zombie shortly afterward, Liv losing her friend by killing a man in her defense, Major getting captured by Julien because he was too aggressive, and Blaine ensnaring Liv’s little brother in a trap. Everything is personal and high-risk. Oh, and Clive’s the only good guy left who doesn’t know about zombies.

The box is shrinking!

One last note: assuming – and this is a rather grand assumption – all the good guys survive, I notice that Teresa and Liv’s brother, whose name I can’t remember, are the same age, going to the same high school. Possible future romance?

That is, assuming they both survive. Which, as each of them is now caught in a murderer’s grasp, is not the most likely of circumstances.

This entry was posted in This Week on TV and tagged iZombie. Bookmark the permalink.