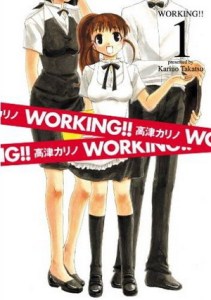 I can’t recall any ready comparisons at the moment, but I know it’s a trope to take a common workplace setting, or other such everyday environment, and populate it with uncommon (re: colorful and/or crazy) employees. They go about their ordinary lives with all sorts of extraordinary things happening between them as if it were normal. The result is supposed to be comedic.

So it’s not like Working is doing anything particularly original. The question is, how funny was this particular attempt with such a formula?

Working follows the everyday chaos which erupts at a family restaurant called “Wagnaria.” Almost everyone who works there has some sort of neurosis. While everyone can tell what it real and what is not, the way most of them approach life is severely skewed. For instance, the main character Sota Takanashi, has had some traumatic childhood experiences which have convinced him that 1) all tiny, cute, adorable things, such as toddlers, puppies, kittens, and water fleas, are sacrosanct, and 2) all older, taller women are ugly, selfish, old hags. As one person puts it, he doesn’t regard anyone over the age of twelve as a person.

And this is not the most extreme example of craziness to be found here. Among his coworkers:
A lazy, gluttonous manager who used to be a delinquent. (not too bad…)
A waitress who carries a Japanese katana at her side and has done so since childhood, and who is obsessed with the manager. (a little odd…)
A very short, and adorable, high school girl who dreams of growing tall. (fairly normal, and she’s such a sweetie!)
A very tall former delinquent who has an unrequited love for katana-girl, and takes out his frustrations on the short girl by crafting ridiculous hairdos regardless of her protests. (I’d actually call him the most mature of the bunch)
A master of information gathering and blackmail. (and pretends he’s normal)
A severely-pliable store owner who is never there because he’s always out searching for his missing wife who got lost when she went to the store and has never found her way home. (a very odd pair)
A normal girl who is going nuts because, being surrounded by crazy people, she’s latching onto her normalcy as an anchor for her sanity, even while doing so hastens her descent into madness. (good-bye, sanity!)
A runaway from a rich family who never does any work and wants to be spoiled. (and adopted…)
And, to top it all off, a teenaged girl with abnormal strength, who suffers from androphobia (severe fear of all men) to point where she reflexively punches them. (easily the most traumatized of them all)

Ok, I take it back. Takanashi, He-Who-Loves-Tiny-Cute-Things-With-An-Insane-Passion, just might be the craziest of them all, when you get down to it, and he doesn’t have the the same excuse as the androphobe, Mahiru Inami.

Inami’s first meeting with Takanashi, and every meeting with him, involves a severe punch. The manager then just assigns him to help “cure” her phobia, willy-nilly. While the two do their utmost to be friendly and cordial to one another, there’s only so much you can do when an instantaneous punch, from a fish that can crack concrete, is always a guarantee. Then Takanashi meets Inami’s father, and everything becomes clear.

I promise, I’m spoiling only this one scene.

It turns out, the psychotic man has carefully crafted both the overwhelming fear which plagues his daughter, as well as the overwhelming strength with which she plagues all men who come near her. He wanted to keep his daughter for himself, and manipulated all of the information she was fed and all of the entertainment she enjoyed, all to reinforce her fear of all men, which has its root in his lies that all men, every last one, are rapists just waiting to pounce on her. Though he himself was the first victim of her devastating punches, he considers his efforts a success. After all, no men can get anywhere near her, and very few have tried after being on the receiving end of her punches.

Takanashi, both angry at the source of his current physical pains and enraged that such a sweet girl as Inami has been so devastatingly manipulated and psychologically twisted in such a cruel manner, and by her own father, lays into him with a verbal lashing that puts the cat-of-nine-tails to complete shame. The man beats a hasty retreat before that becomes a physical lashing, which he totally deserves.

And Inami, overhearing this exchange without either male being the wiser, falls in love.

Unfortunately, she still punches him at every meeting, but she’s trying to get better.

That’s basically the sort of show Working is. There are endless jokes, some funny, some not, but every so often, without warning, something truly serious pops up. Even amidst the endless jokes, and setups for more jokes, and oft-recurring jokes, these more weighty matters demand some momentary attention. After all, the more extreme neuroses all have their roots in legitimate childhood traumas. So when you have a horde of crazy people in an everyday environment, the question is, what happened to make them so crazy?

And even amidst a hilariously-crazy crowd, there’s still some tender moments of human connection.

So, overall, I enjoyed watching Working. 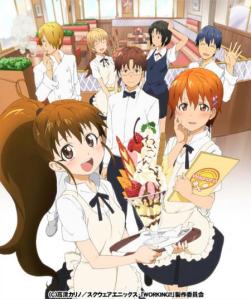 “We will draw you in and leave you hanging!”

That said, they didn’t really finish any of the stories they started, which just annoys the crap out of me.

The unrequited love was just starting to turn into something that might go somewhere, but we never see it. Inami the Androphobe is “making progress” we never see, while her own crush might just begin to come around to his feelings for her, assuming he can stop thinking of her like a dog. The runaway’s brother shows up looking for her, but Mr. Blackmailer keeps them apart, which, as far as I’m concerned, just crosses the line into full-creepy territory, and we never see what happens with that odd, and disturbing, triangle either. In short, almost everything that happens is followed by a lot of things which don’t happen. We never see the end of the story!

Which, I say again, annoys the crap out of me!

There’s also an issue of pacing. A lot of the time, one can’t stop laughing because the jokes follow one right after another. Yet, at other times, it’s much more “drama” than “comedy,” and they lose a lot of steam there, especially considering the many unfinished plots. (Have I sufficiently communicated how much that annoys me, yet?)

For all this, and despite how, there is no other word for it, creepy a couple of the characters can be, I still mostly had fun watching this anime. If you’re into crazy chaos erupting in everyday life, this might be for you. If you’re into serious character development and plot progression, this probably is not for you.

Working was never an A-grade work, and it would only barely scrape by with a B. It’s not a complete wasting of time, and it’s mostly pretty wholesome, but I can’t give this one my best recommendation. I suppose I’m coming down fairly neutral with a leaning towards positive.

EDIT: Oooooh! There’s a new season coming out! This may change the final rating! 🙂