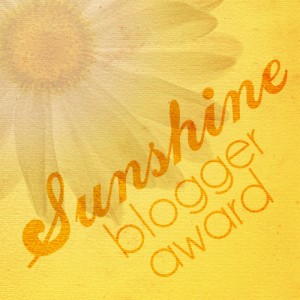 So, I was nominated for this little “Sunshine Blogger Award.” Which is cool! I guess I do manage to keep things a bit upbeat, just the way I like! 🙂

The rules for this award are as follows:

Well, I’ve done the first, and I hope mentioning the nomination chain does them no disservice. I was just so intrigued by the question I’ve been asked, and the question they were asked, that I couldn’t help but look at some of the other questions my fellow bloggers in this sequence also asked. They are often surprisingly deep and thoughtful. Thus, I am even more thankful to coolbeans for nominating me and giving me this little experience.

Second, as for the question, I was asked: If your house was on fire and you could only save one thing (excluding family members/pets) what would it be? Or, in a less wordy way, what is your most treasured possession?

Firstly, thank you for not giving me one of those devil-stupid questions about who I would save, because the obvious answer is everyone. 😉 But, supposing that everyone got out safely, almost everything physical that I own could be most easily replaced. Except, of course, for what’s on my computer (and I am cheating and including my external hard drive with that, so haha). On my computer, I have everything about the stories I’ve been working on, the blogging I’ve posted, everything I’ve written, my collection of music and audiobooks, and digital media… in short, it has both my entertainment and everything I’ve ever written and been able to preserve. It’s my external brain, as well as the housing for a portion of my heart and soul. Hands down, I’d save that above all else.

…which, as I think about it, might leave me somewhat screwed in the short term, as I’d be utterly without food, money, or anything more than the clothes on my back, but even so, I’d rather have to borrow the means to contact my nearest relatives than be without what I have written. 🙂

Speaking of, my nominees are:
Girl on Comicbook World
My Tiny Obsessions
Sourcerer
Geek it Cool
Fujinsei

As for my question:
To me (and I am sneaking my own answer to this question into this, mwahah!), writing is simply something I must do to be whole, complete, and functional. Without my words I am a wolf without teeth, an eagle without wings, a fish without gills. That’s why I started my blog, and why I will continue it for the foreseeable future.
What is writing, particularly your blog, to you?

Thanks again, coolbeans4!  This was even more fun than I thought it would be! 🙂