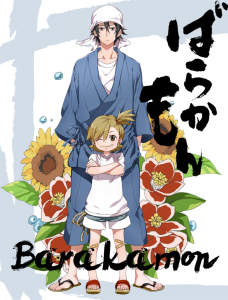 This is a fairly short review, but there’s not that much to say when it’s all good, and even less to say without spoiling it, which I prefer not to. 🙂

Barakamon is a prime example of why I abide by my one-episode rule: if I had simply dismissed this one, which I nearly did, then I would have missed out!

The synopsis I read did not particularly appeal to me, but within the first episode, I was hooked. Not only was I howling with laughter, but I was enchanted by the characters.

The main protagonist is Seishu Handa, a professional calligrapher. To those who do not know what that entails, like I did not, think of it like making an artistic career out of hand-writing (Japanese kanji), complete with galleries and contests. Handa recently behaved quite poorly at one of these contests, as his work was given some mildly harsh, but entirely accurate, criticisms. To help him mature and get his act together, Handa’s father sends him to live in a rural community on an island.

Shortly after his arrival, Handa meets “the village scamp,” Naru Kotoishi. Naru is a six-or-seven-year-old girl, enchantingly adorable, who has long since claimed the house Handa moves into as a “base” for her and her friends to hang out in after school. This practice continues, though Handa initially tries to expel her, and her friends, from the premises, but she just sneaks back in quick as a wink. Her sunny, energetic disposition and honest curiosity catch Handa totally off guard, and he can’t help but grow fond of her. He’s even more surprised by the affection he receives from his new community as they, like Naru, welcome him, a complete stranger, into their midst as one of their own.

What follows is a heart-warming tale of growing friendships and human relationships, not bogged down by any pesky romantic sub-plots! This is a drama, but not a love story! 🙂

Handa sort of just falls into the role of looking after the kids who come around his place and they do much to inspire his work. He learns to have fun, instead of always working, and his calligraphy style evolves as a result. On this island, he finds a place for himself, a source of endless inspiration, and the humility needed to apologize for his mistakes.

And the twelve-episode journey is hilarious to behold. It’s a very clean brand of humor, which I both appreciate and find to be far to rare in mainstream entertainment. This story was obviously penned by someone who comprehends younger children, how they behave, and the mirthful nature of everything about them, including the hectic mess they bring into our lives. Between the children of varying ages and their grown-up counter-parts, there is almost never a lack of something to laugh about. It’s a realistic hilarity too, some parts juvenile and cute, some parts mature and complex, and all parts endearing.

In short, this is just a really good show, full of good feelings, and I really enjoy it.

This entry was posted in Anime and Cartoons, Tuesday Review and tagged Barakamon, Naru Kotoishi, Seishu Handa. Bookmark the permalink.