Twice Into the Woods: A Rambling Comparison of the Movie and the Play 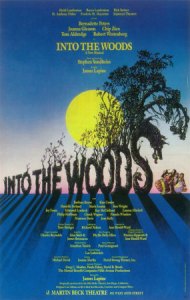 I commented once before on the value of different versions of the same thing.

I have to confess, when I found myself given, for Christmas, two versions of Stephen Sondheim’s Into the Woods on DVD, one for the movie and one for 1987 Broadway play, I forgot my own lesson for a moment. I thought to myself, “How can the live play compare to the carefully-edited movie?”

I have since seen the error of my ways. 😉

True, I enjoy the movie more, personally, but my initial comparison of the two was faulty. It’s not about which one is better, it’s about what each of them individually, and both together, can tell us.

So, in no particular order, I present a few observations of mine.

Be warned: there are probably some significant spoilers here! Proceed at your own risk! 😉

The movie, of course, can best be described as a streamlined version of the play. A couple of the characters are cut out, including Cinderella’s father, who didn’t seem like much of a father in the play, as well as most of the bits involving the Baker’s father, the Baker takes over the narrator’s lines. The proverbs and interludes are unnecessary, of course. As a result of such changes, the movie is a potent drama. But the play, on the other hand, inspires a lot more laughter! I mean, it’s much longer than the movie, so they have to keep the audience happy, eh?

Speaking of, Bernadette Peters was awesome as the Witch! Hers is easily a standout performance! 🙂 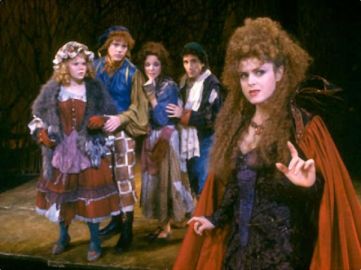 The movie, however, was more easily able to transport us to the time and place of each character’s significant moments, like Cinderella on the steps of the palace, Jack climbing the beanstalk, Red Riding Hood getting eaten, etc. It kind of felt more personal, so there wasn’t as much need for the jokes and laughter, ya know?

And Meryl Streep is also awesome as the Witch! And among equally-skilled peers! 🙂

It’s interesting how most of the special effects in the movie were much better, as they could do things besides stage tricks, yet, of all things, it is the Big Bad Wolf which looks more like a wolf in the play and less so in the movie. I can see why they went that way, as having a realistic wolf mask singing can look… a little weird. Still, it’s not usually the case for the movie to avoid a special effect that a play can pull off in some way, is it? Interesting.

Speaking of that, the movie was able to cast much younger people in their much younger roles. Especially Jack and Red being kids, but also the Baker and his wife, both princes, and Cinderella. Not the Witch, though. When Meryl Streep went from being the ugly witch to the beautiful witch, it had far less to do with her age than it did with the healthy fullness of her features.

On a completely different note:

The female giant is, in both versions, the result of what everyone did to fulfill their wishes, but in the play, even before her rampage, the happy endings were not all that happy. Cinderella wasn’t much of a queen, and her family kept pestering her; the Baker was plagued by self-doubt about raising his son, thrusting that burden onto his wife; Jack wasn’t so thrilled by riches as he imagined; Rapunzel went insane from the trauma’s she’d survived; both of the princes strayed from their brides, etc. The point is well-made that not everything comes out rosy, even in the best of situations. Everything is always more complicated than it appears. 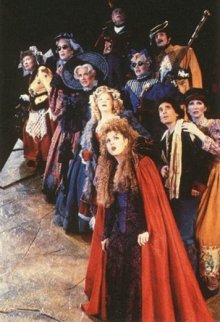 In regards to that last, I rather prefer how the movie treats Rapunzel and her prince. I mean, come on, they’ve already suffered and braved dangers for each other in either version, did they have to go with him straying and her going crazy in the play? I can understand how it works into the theme, but still, they could have at least one actual happy ending in the play, ya know?

Speaking of the theme, the play has more fun blending and blurring the lines, in several ways.

In the first way, the boundaries between fairy tales are constantly broken in the play. For one example, the Baker helps skin the Wolf at the insistence of Red Riding Hood’s grandmother, which he didn’t do in the movie. For another example, in the movie, we see Jack cutting down the bean stalk, as well as climbing it earlier, and we see the dead giant’s body. In the play, we only see other characters as they hear and feel the crashing boom of the falling beanstalk and giant. It makes it feel all the more natural for all these characters to be in the same room at the end of the play, because they always have been. It’s very neat.

There are also blurred lines between the cast and the audience. There’s an actual narrator talking straight to the audience, that is until the characters throw him to the female giant in the latter part of his narrative, in a vain attempt to appease her. A couple of the cast members play more than one role. The witch actually appear in the balcony for a moment too. And the characters themselves periodically come out and give quick little proverbs, relating to where they are in their respective stories, and some of them are given a rather chilling meaning by the events of the play surrounding them.

“We specialize in turning the world upside-down!”

These blurred lines play well to the upsetting of what fairy tales tell us is right and wrong. Jack and the Beanstalk, for instance, is basically about a lad who invades a home, accepts charity from the lady of the house, then robs her and her husband, three times, before killing said husband. But we take his side just because the giant is big and scary. That’s pretty messed up, isn’t it? And when Jack loses his mother, his first thought is pain and revenge as well, just like the female giant who is hunting him.

In the play, the Witch straight-up says, “Giants are like us, only bigger.” That further supports something that is implied but not directly stated in the movie: the female giant is not a villain simply because she’s a giant, and it’s likely her husband may not have been a villain either. The Baker doesn’t protect Jack because he’s a good boy who made a stupid mistake, but because his mother begged for a promise of such with her very last breath. Things are not always so clear cut as “good” and “evil,” and among all the blurred lines, this one is the point of the play: be careful the lessons you teach your children, both with your words and your example. They will, after all, see and hear everything you do.

…and I suppose that’s a pretty good note to end my little rambling on! 🙂

This entry was posted in Discussion, Miscellaneous and tagged Into the Woods. Bookmark the permalink.