Like many fans of the MCU in general and Daredevil in particular, I was quite excited to see its second season this last weekend! Because what do people love about what they like if not getting more of it, eh? 😉

The first thing I want to say about Daredevil, Season 2, is that, unlike most other shows I could name, nothing is left to remain as it was in the previous season. Things are not left to rust here, they are organic and alive, and life is messy, always moving and changing in some way. I’ll try to skate around the major spoilers here, for the sake of anyone who reads this and has not seen the show yet (which I highly recommend!) but suffice to say… almost nothing stays the same for very long. In the first season, things were about making and building and putting things together. In the second, it was about trying to hold things together, and sometimes that just doesn’t happen, no matter how hard you try.

…and that’s actually a pretty good segue into the first, initial conflict of the season, between Daredevil and the Punisher. The two vigilantes may be wildly different in some areas, from their beliefs to their motivations to their respective arsenals, but they’re more than a little similar too. What puts them at odds is how they approach the problem at hand. Daredevil may give brutal beat-downs, but he never kills people (…unless under extreme circumstances, like with that ninja fellow Nobu last season…) while the Punisher leaves piles of bodies in his wake. Both men have valid points behind their approaches, and one of Punisher’s is how the criminals Daredevil beats down, everyone from the lowliest gun runner to the Kingpin himself, gets back up.

Daredevil’s done just a little bit of good in Hell’s Kitchen, but it’s proving impossible to hold together.

You’ll note that I said this was the first conflict of the season. While last season was entirely about developing Daredevil and the Kingpin into proper mortal enemies, which, while gripping, was fairly slow at times, Season 2 takes off running right from the get-go. The three-way collision between Daredevil, Punisher, and the criminal element, with the fourth side of “the Law,” is fantastic, and the repercussions ring through the rest of the season, but it’s certainly not the only happening. 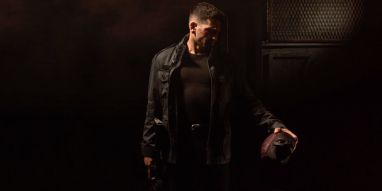 In fact, everyone’s off doing their own thing this season, which gave everyone more opportunity to shine. Daredevil, aka Matthew Murdock, and his friends, Foggy and Karen, may have been trying to stick together, but each ended up following their own path. Karen finds a new calling in life (and gets into pretty much every mess imaginable in the process), Foggy shows his stripes as a formidable lawyer independent of Matt, and Matt… well, after he takes down the Punisher, the love of his life returns and pulls him into a war with an evil cult of ninjas who have a nasty tendency to not stay dead.

Those last two are actually more connected than one might think at first blush, but let’s just say that while Foggy has been supportive, if not necessarily approving, of Matt’s vigilantism as Daredevil, things come to a head when said vigilantism intrudes into their professional lives and puts their firm at risk. Matt disappoints Foggy several times, and loses his trust, while also coming to believe that Foggy is better off without him. This pushes Foggy to really show what he’s got, and as the two men become more independent of each other… well, their relationship, and partnership, changes.

As for Matt/Daredevil, I just have to say: they made the issues the characters discuss, and represent, much more interesting than they did his romantic entanglements. Well, sort of. I never really liked his pairing with Karen, as it felt too forced, with a bit of hero worship, and fairly unbalanced. The best pairings are between absolute equals – note: I do not mean “clone copies of each other,” I mean equals – and while there were also some disturbing flaws in any relationship with a crazy woman, I can’t help but see Elektra and Daredevil as equals. Basically, I felt the Karen romance was “meh,” and didn’t want it, while I did want things to work with Elektra, however difficult it might prove.

“You know the story is MUCH more interesting with me in it!”

Meanwhile, as for the issues, I loved how pretty much everyone had valid reasoning behind what they said and did, especially when they were arguing. In the end, none of the issues were truly resolved, except for one, right at the very end: normal people don’t need extraordinary heroes. It’s “ordinary people” who are the greatest heroes of all. And they should really stop relying on “extraordinary” ones to solve all their problems and make the world a better place. They’ve been trying, really hard, and it’s not working very well, is it?

Speaking for myself, I’d say Daredevil and Punisher represent certain extremes: one kills too easily, the other not at all. For both of them, its about standing in judgment, but the reality is simpler than that: it’s a battle, it’s war, and when you are fighting for your life and everyone and everything you care about, taking lives should be a last resort, neither a first nor a nonexistent one. But that’s just according to me, someone who’s never been in a real fight in his entire life, so it’s easy for me to talk.

Still, while both men could do with a bit of compromise between them, compromising with a villain is not such a good idea. Yet both men do it, each with an enemy Daredevil has faced before. There’s a reason we are cautioned against making deals with devils, because they tend to devour us once our usefulness has ended.

Before I wrap this up, a quick note about the return of Wilson Fisk, and his ascension in prison to become “the Kingpin.” I love how they brought the danger he represents so much more to the forefront of his time in this season. We already know who he is, so he didn’t need to be a bogeyman working through a highly dangerous ally. We saw his cunning, his resourcefulness, and even his overwhelming strength. Not to mention his instability when it comes to having what he loves threatened. Oh, and it’s clear what his plans are when he gets out of prison: reclaim his criminal empire in one fell swoop and destroy the people who ruined him, including the vigilante and the lawyers who brought him low. And did I detect a moment where he may be guessing something about Matt’s double identity?

As I said… Kingpin. Dangerous. 🙂 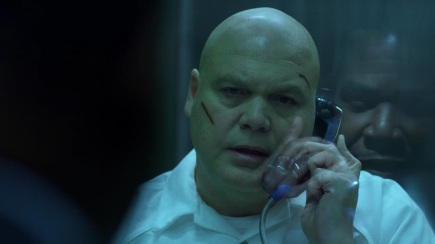 “You didn’t *really* think they could get rid of me so easily, did you?”

Overall, I gotta say, I really enjoyed… most of this season! There were just a couple little… things… that… well… you know how it is when you really like something, but then you realize, “Oh, there are very young kids in my general vicinity who are not at all ready for this, I’d better not talk about it too much!” What is that feeling? I don’t know. But anyway, I shall say that Marvel’s Netflix adventures seem to be getting bloodier and bloodier with each new installment. It worked best in Daredevil‘s first season, but Jessica Jones took it up a notch in some ways, and Season 2 pushes things even further… and makes us see it.

Sooooo, yeah, I’d strongly caution against watching this with young children. Not nearly to the same degree as Deadpool, mind you, but… still.

Between that and a couple narrative short-comings, mostly involving Karen kind of getting her new career served to her on a platter instead of really earning it, as well as her romance with Matt, some inconsistencies in Stick’s behavior, and how the war between Daredevil and the Hand felt pretty rushed… well, it’s not like I’m going to tout this season as some absolute masterpiece. And what’s with choosing that scene they ended with?

Still, I had fun watching this. The plot was gripping, the themes are worthy of discussion, I love the characters and their journeys, and I actually like the hanging loose threads right at the end that will surely be used to push Daredevil further and help weave the Defenders’ stories together. I am looking forward all the more to Luke Cage on September 30th, seeing some familiar faces pop up again.

So… right about even with Season 1! 😀

6 Responses to Daredevil is Still Very Daring in Season 2