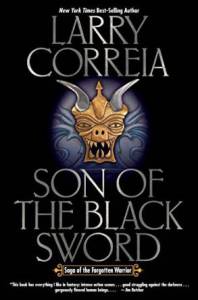 Son of the Black Sword is the most recent novel published by Larry Correia, and the first in his Saga of the Forgotten Warrior.

I’ve read and enjoyed much of Correia’s work before, including Monster Hunters, his urban fantasy series, and the Grimnoir Chronicles, a sort of urban fantasy, period piece, and alternate history all rolled into one. Then there was Dead Six, which, for some reason, I just couldn’t get into at the time and quit after barely the first chapter. It’s not like I’m some die-hard Correia fan, but I’ve generally appreciated his work, so when I heard he was writing a full-fledged fantasy series, I immediately knew I was going to give it a chance. 🙂

The story has a few protagonists, but it mainly follows Ashok Vadal, a tall, strong, highly-skilled warrior with a huge, black sword. As a Protector of the Law, it is Ashok’s duty to travel across the land, destroying demons as they slither out of the sea, and bringing law-breakers of every caste to justice. Both endeavors tend to be fatal for those who stand in his way, but Ashok is not some bloodthirsty killer. He is merely a consummate servant of the Law, very nearly void of all emotion.

Then something happens which shakes him to his core: he learns the truth of himself and his past. As he reveals that truth, in service to the Law, his entire civilization begins to be upended as well. I won’t go into details, to avoid spoilers, but Son of the Black Sword is basically about Ashok’s gradual growth and transformation as a character following this momentous revelation. He begins to gain a new perspective, to see things and think thoughts and entertain ideas he never would have before. He has long been a fighter and a defender, utterly devoted to his purpose. But when that purpose fails him, he begins to find a new one, and become a true hero.

It is, of course, much more complicated than that, but, again, trying to avoid spoilers! 😉

I really enjoyed this book. The narrative structure was a bit unusual at times, not only flashing back through various memories of years past at immediately-significant moments, but also summarizing through or skipping over many months. Between that, a small but potent cast that is dispersed across great distances and circumstances (like which caste they belong to and what role they fulfill), and a rich background to the overarching conflict that has been centuries in the making, Correia captures the texture and sensation of a true epic. Yet, at the same time, the characters are human, understandable and believable, and lovable. (my personal favorite is the librarian! 🙂 )

If there is one qualm I have with this novel, it’s how it feels like only the beginning. Like things have barely gotten started. Now, while that is true for the series, I generally prefer when novels can feel more like whole and complete sagas and stories all on their own. Son of the Black Sword is a fine story, but right there at the end, without the next novel and possibly the entire Saga as a whole, it felt like it was lacking a leg to stand on. I suppose Correia chose the most ideal stopping point he could, but, still… small disappointment. That said, it’s the kind of disappointment that will have me picking up each successive novel in the series until we get to the end, which is the point, after all. 😉

“It’s almost as if they wanted to make money doing this!”

Another small qualm I have is how, while it’s easy to understand the characters, there doesn’t seem to be any subtlety to how they are presented. We know exactly what the villains are up to, how they’re going about it, and what they want. We know almost everything about the heroes too. There doesn’t seem to be much room for discovery of who the characters are. On the flip side, that also means there is a firmly established foundation for their development. Ashok being the prime example, the way he grows makes perfect sense. So, it’s something of a balancing act, and while I’d say Correia’s gone a little too far in one direction, it’s better than going too far in the other direction, where the characters would become incomprehensible and things would happen “just because.”

Oh, right, that’s something else I love about this story: as epic as it is, it’s being driven by the characters, not the plot. 🙂

The action scenes are gripping and realistic, especially in the level of details, another balancing act of making the world feel real without getting bogged down in said details.

I instantly hated the caste system, but that’s because I hate all caste systems from the very bottom of my soul, which put me firmly on the side of those who rebel against it.

We know the broad strokes of the overarching conflict, which were delivered in a fashion that remained gripping and entertaining and avoided repetition. Very good. But, again, not done very subtly and with very little room for mystery and surprise twists in the rest of the series. Though I could be wrong about that. 😉 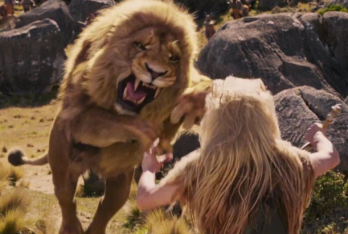 Not quite so un-subtle as this, perhaps, but…

The belief systems, ranging from devotion to the Law to the worship of a deity only called “the Forgotten,” lent a heavy religious air to the story, and one which actually affected the outcome instead of just being some kind of background texture.

I love how the two sides of the conflict come to mirror each other. On one side, those who rule the adherents of the Law don’t really see it as anything except a tool they can use and pervert as they please. On the other, the faithful of the Forgotten are led by people their deity has chosen, most of whom don’t actually believe in, worship, or submit to the deity that has chosen them! It’s like the Forgotten said, “I’ll see your faithless abusers of the Law and raise you some faithless leaders of my own! Ha!”

Have I mentioned how much I love the characters? Much of the humor of this novel is found simply in their interactions, and the pointed themes, like the story, are driven home by them, not by any “just because” plot. 🙂

As great as the story is, it seems I am now comparing whatever I read to The Emporer’s Blades, and this just didn’t have the brain candy to withstand that comparison, ya know? Sorry, Black Sword! 😛

All in all, I just really enjoyed this novel. I was actually surprised by how entranced I was by the unfolding twists and turns.

This entry was posted in Books, Tuesday Review and tagged Larry Correia, Saga of the Forgotten Warrior, Son of the Black Sword. Bookmark the permalink.