Civil War: The Avengers Are Disassembled 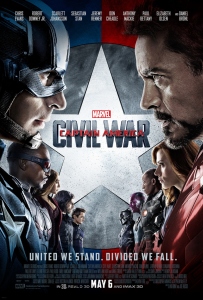 It must be said: DC, this is how you do a hero vs hero movie! When I exited the theater from Batman v Superman, I was already going over my critiques. When I exited from Captain America: Civil War, I was too busy geeking out about how freaking awesome this movie is! 🙂

Now that the inevitable comparison is out of the way…

I loved this movie! I enjoyed it so much that I can hardly think of where to begin with all the juicy goodness! So, instead, I’ll get what was wrong out of the way first. Just a couple technical details:

First, every time we shift to a new location, we do not need its name filling up the entire screen! Seriously, smaller text!

Second, enough with the shaky-cam! Really, Marvel, what were you thinking with all the shaky-cam in this movie? We, the audience, neither need shaky-cam nor do we like shaky-cam. It was horrendous, especially during the action sequences. Come now, Marvel, you should know better than that! This the first time I’ve seen one of your movies where you pulled this nonsense, and it was stupid! Let us see the action clearly!

Third… this is more “Avengers: Civil War” than it is “Captain America: Civil War.” His portion of the plot may have been the most central and enduring, but when you get down to it… he was basically just trying to keep his friends from tearing each other apart. That’s a bit different from fighting for freedom, as he did in his last two movies. The conflict with the Sokovia Accords was more in the background, where Iron Man wanted to keep people safe and Captain America wanted to keep them free and safe. The movie was one prolonged example of the Captain being right, but it wasn’t his refusal to sign the Accords which caused the Civil War. He was just trying to protect his friends.

In fact, and here’s where we get into less of a complaint and more of a complimentary discussion, the entire Civil War movie was less about a war between divided heroes and more about how such a divide comes to be. The first two phases of the MCU were all about bringing the Avengers together. Phase 3 is kicking off with tearing them apart. Which has all sorts of fun ramifications for the next several movies and beyond!

I’m guessing and hoping that they’ll come together again for the Infinity War, but in the meantime, the Avengers have been disassembled. For something like that, the movie needs to focus not on just one Avenger, but all of them. Thus, this was an Avengers movie. And that is where we get the classic masterful use of characters that is the Marvel Cinematic Universe!

Pretty much everyone has a character arc all their own. Scarlet Witch is dealing with how people see her, Vision is trying to keep the peace, Iron Man is driven by guilt and anger, War Machine by duty, the Falcon by friendship, etc. With all of that, we see, once again, the Avengers may be mighty heroes, but they are also human. Even when they’re technically gods or robots or aliens or whatever. That has always been Marvel’s outstanding characteristic, thank you, Stan Lee! 🙂 Being human, we can see them all as friends, and that comes through clear in this movie. They’re not just a bunch of super-powered coworkers in a very specific line of work. They’re friends. Sometimes pretty darn close to family. The division between them is painful, even when they go easy on each other. All the more so when they don’t. 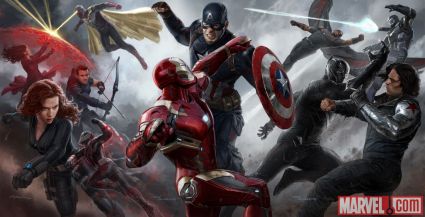 “We can still be friends, right?”

That human element is carried perfectly by the three most notable new additions to the cast: two new Avengers, Spider-Man and Black Panther, and the villain, Zemo. I’d heard the people behind the movie were saying that in casting Tom Holland as Spidey, they’d done for the character what casting Robert Downey Jr. did for Iron Man. I can’t but agree, as we see this teenaged web-slinger not only stand among the world’s mightiest heroes, but thrive among them as well. Spidey and Ant-Man, in particular, brought some much-needed humor to the fight between heroes! 🙂

As for Chadwick Boseman’s Black Panther, he was wonderfully human too, wrestling with the need for justice and vengeance after a terrible tragedy. He and Zemo stand as an example of what makes the difference between heroes and villains: villains spread their own suffering, while heroes overcome it.

That goes into a running commentary, absolutely filled with spoilers, which I will elaborate on some other time. 😉

All of this, of course, could not be possible without actors (and stunt doubles) who are all exceptional at their jobs. Seriously, everyone is phenomenal. Super kudos.

And super kudos to the people who crafted the material which the actors bring to life. 🙂

Basically… this is an awesome movie. Were I to place it on my Marvel Countdown of last year, it would definitely knock Age of Ultron out of its Number Four spot, and even give the original Avengers movie a good fight for spot Number 3. 🙂

I don’t care how limited my budget is, I will go see this again! 😀

2 Responses to Civil War: The Avengers Are Disassembled