Book Review: The Second Super (is not so super) 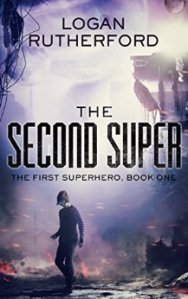 So, the world is perfectly normal until, one day, some sociopath punk kid with superpowers begins tearing it all up, slaughtering people left, right, and center at his whim. The world immediately descends into terrified chaos as thousands die across the globe, and within months, all the major cities are ghost towns, everyone trying to run and hide in the countryside. And then some other teenager in the middle of nowhere suddenly develops superpowers too and, possessing an actual moral compass, decides to challenge the monster that’s been rampaging across the world, to end the madness and fear. Various complications ensue.

That is the story in a nutshell of The Second Super, by Logan Rutherford.

I hate to disparage another person’s work, but this was kind of a “meh” book, at least for me. Part of that, in due fairness, may be because superheroes are all the rage right now, and competing with the likes of Kipjo Ewers’ work does Rutherford no favors, so it’s even more difficult to impress than usual. Still, even on solely its own merits, The Second Super is not particularly super.

The premise had some promise, but it suffers from some clumsy handling.

Kane Andrews, the main protagonist, is an average teenaged boy, even when he gets his superpowers. He’s fast, strong, can flight, can regenerate, can endure environments that no normal human can survive in… basically, he gets the blanket package of basic, physical powers. These are the same abilities that his enemy, the first known superhuman, called Richter, has, but Kane has them to a lesser degree. The source of their powers is never explained nor ever even hinted at. They just have them, and use them however they like.

The story was pretty formulaic: good guy gets superpowers, does heroic things, gets hunted by the government (which was extremely stupid), has an all-powerful enemy that tries to turn him to the dark side, reluctantly teams up with reluctant allies in the government after some devastating, personal loss (a friend of his, who had, like, one significant scene in the entire story, was killed), is immediately double-crossed, goes above and beyond to finish off the enemy, and, oh, as it turns out, there are other people with powers after all, surprise, surprise (though the telepathic girl directing him at the end of the fight felt very deus ex machina anyway).

The world felt very shallow as well. A few thousand have died, yet everyone’s in a panic and leaves every city, as if that would offer any real safety. They’re all huddling in refuges and shelters, all of them being somehow magically fed and sheltered despite flooding the countryside, and still somehow there is yet more available space. They’re all quivering in fear of Richter, yet still the parents go out of town for business and leave the kids to throw big parties in their mansions in the middle of nowhere. And there are cultish, time traveling secret orders who are up to who knows what. Not a very fleshed-out world, this.

And the characters felt fairly flat. We never knew why Richter decided to be a murdering jerk. All the bad guys were bad just because. We never saw a clear motivation for Kane other than, “because it’s right,” and this despite how he talked about it so much. We didn’t get a realistic romance, even for teenagers, as Kane and his girl already had crushes on each other by the story’s beginning and just went through the motions of a mutual confession.

I did like how Kane had to find ways to test out his powers, to train himself and learn his limits so he could push them. The experience of suddenly gaining superpowers is generally not a graceful one, and seeing Kane learn how to wield his power was fairly entertaining. He’s determined and a little clever at times, but clumsy and undisciplined as well. That much, I could believe, and roll my eyes at.

And in an attempt to get us to pick up the next book, this one has a most confused, convoluted ending that tries to be ominous and display that there is an overarching plot at work here.

In short, The Second Super was a pleasant enough read, I suppose, but not really riveting, with huge holes in it, and I have little interest in continuing the series.

This entry was posted in Books, Tuesday Review and tagged Logan Rutherford, The Second Super. Bookmark the permalink.

2 Responses to Book Review: The Second Super (is not so super)