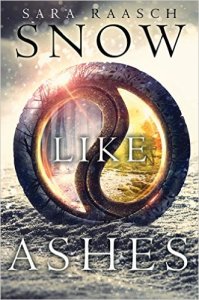 So, I finished another one of my experimental reads: Snow Like Ashes, by Sara Raasch.

The story follows a young lady, Meira. She is sixteen years old and has been an outcast and a refugee for the whole of her life, as her homeland was destroyed within weeks of her birth. With exception to about two dozen people, which has been reduced to a mere eight in the sixteen years since then, the whole of her people, her nation, her ethnicity, have all been either slaughtered or imprisoned in hellish work camps, in which they’ve died in droves. There’s maybe two thousand Winterians left in the entire world.

Oh, right, Winterian. These are the people from the kingdom of Winter, and they were conquered by Spring. There are two more “Season” kingdoms, Summer and Autumn. These lands are frozen within that specific season by the immense magic which their monarchs channel. There are four “Rhythm” kingdoms as well. Eight kingdoms, eight monarchs, each with a “conduit,” which is a talisman infused with powerful magic that they can use and direct, and which connects them to their subjects. But Winter’s conduit, a locket, was broken when the king of Spring murdered Winter’s queen.

So, the refugees have been trying to get both halves of the locket to give to their young, uncrowned king. Only a female can use Winter’s conduit, but it would make things official, and they hope to get allies so they can defeat Spring and free/save their people. That sounds very simple, but politics and prejudice – Seasons and Rhythms don’t get along because everybody is stupid – make it very complicated.

The hoops that the Winterians, especially Meira, have to leap through in their desperate struggle to save their people from extinction are numerous and profound. Skating around spoilers as much as possible, the story can pretty much be divided into clear sections based on where the characters are, what they’re trying to achieve, and what difficulties they’re encountering. There are three very clear and specific acts, which might be lacking in subtlety, but it’s a solid formula. 😉

I really liked Meira. The way she narrates the story was a joy to read. I really could see things from her perspective, though she did lack a few of the specific details that could really transport me into her world. When she’s being pushed to physical extremes, for instance, she doesn’t tell us what it felt like, on a physical level. She had to be weary, aching, and so very thirsty, yet she didn’t really mention it. But then there were details, the sort that I could certainly believe, like how all she remembers from a specific moment of rage and trauma is one specific physical sensation. It was an interesting contrast of sorts, and the way she told her story kept me entertained and riveted from start to finish.

I also found the world to be fairly fresh and intriguing, if also simplistic. I still have no idea how any of the Season kingdoms could actually survive being locked in a single season for eternity, but overlooking that detail, I enjoyed the way this world was crafted. It was a very human sort of world, believable in its own way and filled with things that actually related to the story and made the conflict significant.

I have to say, I enjoyed it despite the familiar tropes and elements that I’ve seen in other stories. The most outstanding comparison, though, is probably Throne of Glass. I might have liked it if I hadn’t guessed the big mystery of Meira’s past within ten seconds of reading, but, really, these days, what story does not have their main character secretly be the heir to a fallen kingdom? We also have the wintery kingdom being destroyed, the princess being trained to fight then taught to be a lady, she’s in contact with the spirit of a dead queen, she’s taken to a hellish work camp at some point, she has two romantic interests, at least one of which is a prince, and there is an evil king who wields dark magic. And so on and so forth.

I think, despite the many similarities and simplicities, what really sold Snow Like Ashes was the characters. Meira doesn’t change into a completely different person or anything like that, but she does grow, just a bit, as she becomes far less selfish and insecure. Her journey actually made that growth believable as she is brought low and learns to lose herself in service to her people. I could also believe her relationships with both of her romantic interests, but I really root for Prince Theron of Cordell, as he helps her grow into a better, stronger person, much more so than Mather.

So, while Snow Like Ashes isn’t particularly original, per se, I still enjoyed plenty and felt like the characters were worth my investment of time. I will most certainly be reaching for the next book in the series sooner rather than later.

This entry was posted in Books, Tuesday Review and tagged Sara Raasch, Snow Like Ashes. Bookmark the permalink.