Doctor Strange is Outta This World! 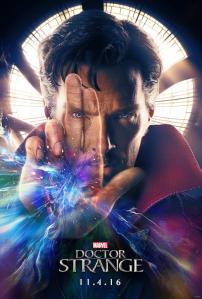 That’s what I thought when I emerged from my viewing of Doctor Strange. 🙂

Safe to say, Marvel has delivered another hit with this latest addition to their cinematic universe.

I hardly know where to begin!

Once upon a time, I might have been somewhat hesitant about giving the sorcerer supreme a movie. That, however, was before Iron Man, Thor, Avengers, Guardians of the Galaxy, AND Ant-Man all proved me wrong. I went into this movie with perfectly high expectations, and those expectations were gloriously met!

I will compare that, in another post, with the sporadic expectations and quality of the other cineverses, but for now, I am simply impressed. Seriously, we’ve yet to get something bad out of the Marvel Cinematic Universe. It is very easy to start falling short when you have such a phenomenal reputation, but Marvel hasn’t. I do call that impressive.

One of the best things about the MCU: they keep adding new dimensions to it, and Doctor Strange does that literally. In the movies alone we’ve had mad scientists and supermen, gods and monsters, aliens and robots, and now, at last, we have… magic! These sorcerers are awesome! Their adventures delve into new realities, ancient powers, and otherworldly dimensions! Yet again, we have another unique contribution to a universe that is already plenty diverse! Not only are the visuals, the special effects, way, way, waaaay out of this world – one could wonder exactly what substances were involved in this – but we’re literally exploring another side of the Marvel world. This new, unexplored dimension has the rich texture of one that has always been there, but has remained unseen.

Who better to take us from the “natural” to the “supernatural” world than Stephen Strange? He is a remarkable character, start to finish, three and even four-dimensional, undergoing the change of refinement over time. At the start, I imagine he and Tony Stark would either get along famously or drive each other to insanity within ten seconds. But much like Stark, Strange undergoes great change as he plummets from great heights to deep humility. Strange’s humility lasts much longer, though he retains his stubborn streak, probably because he must go on a real journey for what he wants, and becomes a student all over again. He also brings something new and strong to the world of sorcery, something adaptable and unafraid of bending the rules. That’s very important for a surgeon turned sorcerer.

Welcome to the weirdness!

Speaking of the magic, they managed to show and tell the basic rules of it without getting bogged down in technical details. Much like the mad science, things simply work this way. It makes the action, which depends on this knowledge being accessible, flow and flow well despite all the hijinks involved. Strange, like the audience, is learning as he goes, and applying what he learns in clever ways. His arsenal of tricks, ranging in potency, is built up over the course of the entire movie, until he is able to match both his allies and his enemies, and we can basically understand all of it. No small feat, that.

The villains are fantastic too, being introduced, built up, and eliminated within this one movie, like most of the others, but in a unique way. These villains aren’t out to conquer or destroy. They believe that they are saving the world. And once they are gone, we already have a line on the next villain Strange will face, as we know and understand him too. That all leads into a gripping narrative, with personal arcs for a number of characters, discussing complex topics and questions for which there are no easy answers.

All of this in the midst of action, humor, origin story, and a little bit of love story, creating a tight, fun, flowing story overall, driven by the characters.

Oh, and it adds to the overarching story of the MCU, absolutely. 🙂

There are just a couple tiny things which bug me a little.

Firstly, over what time period does this movie take place? Because it should have taken some time for Strange to descend from his heights to his depths, to cross the world, and to study magic to the point where he can become so proficient as he does. Yet the story begins this year. That seems like a small oversight to me.

And it took so long for the villains to put their plans into motion?

On a side-note of that: I imagine some people might make a deal about Stephen Strange being mentioned in Winter Soldier, obviously before he becomes sorcerer supreme and before magic attracts the public eye. But as one of the best surgeons in the world, unlikely to accept a Hydra regime across the entire planet, I would argue that the doctor which can get desperate cases, like, say, wounded Avengers, back on their feet would be a most demanding, easy-to-name target.

My second small issue is the music. There’s nothing wrong with it, in fact it’s perfect in pretty much every scene. But I do sometimes wish more of the MCU’s heroes could have their own recurring theme music, something we could think of whenever we think of the hero in question, which then makes us think of the hero any time we hear it. Ah, well, c’est la vie.

Third issue… I can’t really place Strange or any of the other sorcerers on my classification system! 😛 I knew I was going to have to rework it at some point, but I’d thought I’d already covered most of the possibilities with my categories. Now it’s been suggested that I add a new category for the magic users, the ones who exist somewhere where the overwhelming power of Class A overlaps with Class B, where the tricksters live. That makes some sense, as they have a wide variety of tricks, ranging wildly in use and potency.

But issues notwithstanding, and judging Doctor Strange entirely on its own merits…

1 Response to Doctor Strange is Outta This World!