Nevertheless, I have not come this far only to quite now, so…

Let’s see… we’ll cut out something like 95% of them all at once by just focusing on my favorite game of the franchise: Ocarina of Time.

The Child Link levels were fun, but, being so early in the game, not so challenging. So, no Deku Tree, no Dodongo’s Cavern, no Jabu-Jabu’s Belly… ok, that last did have its challenges, but it was also a bit off-putting, what with how we were inside a giant fish.

As for the Adult Link levels…

Forest Temple: …very promising. I especially love that music. It was a bit of a labyrinth, though.

Fire Temple: way too hot! I don’t know how many times I got burned going through that level, but it was too many! 😉

Shadow Temple: no. Way too scary!

Oh, the Kakariko Well! I suppose that qualifies as a Child Link level, yet requiring more skill… but same deal as the Shadow Temple. 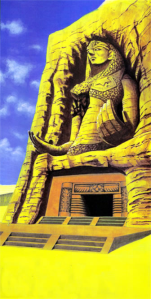 Spirit Temple: …ooooh! That was a very good one! And unique among the levels, in the fact that you visit it as a child and as an adult, thus using all the skills you have accumulated throughout the game, in both times! We actually got to see what happened to the Sage of Spirit, the witches were easily the most personable of the bosses, the puzzles were fantastic, and it was still so new and unique, even so late in the game! Me like! 🙂 And don’t you just love the music? 😉

As for Ganon’s Castle: eh, it was a fun recap of everything preceding, and culminated in my favorite battle, but, still… not quite my favorite level, ya know? 🙂

And I suppose, for purposes of this challenge, that settles it.

My favorite level is the Spirit Temple from Ocarina of Time. 🙂