Ooooh, that’s a tough one!

I mean, most of the Zelda races are just so cool and lovable! 🙂

The Koroks are so cute and fun, it’s easy to see the connection between them and the child-like Kokiri.

The Gorons are proud and strong, if a bit dense on occasion, and once they like you, you are like family to them.

The Zora are sleek and calm, very chill, while their Ruto descendants are sleek and adventurous, and they’re all loyal and reverent to their guardian deities.

The Gerudo are skilled and ferocious, and not at all hard on the eyes! …what? I’m a guy, I’m allowed to noticed these things. 😉

We don’t see much of the dragons, but what we do see of them is awesome and powerful.

The fairies are fleet, helpful, and loyal to a fault.

The monkeys are just so brave and adorable! And helpful, too, once you’ve helped them! 🙂

Even the Deku Scrubs are passionate, if a bit quick to anger, and hilarious to watch.

And, perhaps the most obvious but least remarked upon: the Hylians. I mean, think about it. This is a race that, without being transformed into another, and without possessing any profound magic of their own, survives multiple endings of the world. The demons overrun the land, Hylia sends her chosen people aloft, and they build a bird-riding civilization in the skies. They come back down into the middle of a wilderness, and they build civilization again. They survive the Flood, and the they rebuild yet another civilization. How amazing it that? You just can’t keep ’em down! 🙂 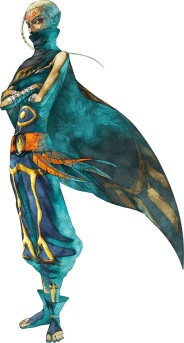 But… even so, I have to say… my favorite race at the moment is the Sheikah.

These are a people very much like the Hylians, such that they can pass for one another if need be, as demonstrated by Zelda in Ocarina of Time, when she ran around in the guise of Sheik. However, while the Hylians are a people of the light, the Sheikah have long been a people of the shadows. They are the ninjas of Hyrule, guarding and serving the Royal Family, and therefore Hyrule itself, for centuries upon centuries. They are loyal, clever, and strong, not to be underestimated. And their impact upon the kingdom, and the franchise, is substantial.

Though she did not appear in the game itself, the manual for the very first Legend of Zelda included the story of Zelda sending her nursemaid, Impa, to find a hero to save them.

Notice how much more awesome the princess is when impersonating her protectors?

Impa was the Sage of Shadow in Ocarina of Time, having protected Zelda since childhood, even teaching her how to be a Sheikah, and aids in sealing away Ganondorf. Which is a pretty strong presence to have at the critical juncture which divides the Zelda timeline in three paths.

Skyward Sword showed us that the original Impa did indeed protect the original Zelda, the reincarnation of her goddess, Hylia. She stood against Ghirahim and Demise alike, and, due to the time traveling nature of Link and Zelda’s adventure, stayed alive in the past to wait through the ages until she could see Zelda one more time, victorious.

Time and again, the Sheikah have been the loyal protectors who saved the land. And they have evidently paid a high price for that. We rarely see any living Sheikah, though it is heavily implied that they have died out over the years. Unless they forgot how to breed, one can assume that most of that is due to many tragic deaths in battle. Indeed, as the King’s deadliest defenders, it is small mystery why they are so few in number a scant ten years after the awful war which drove Link’s mother into the Lost Woods, to put her child in the care of the Great Deku Tree.

The Sheikah have paid for their loyalty many a time, it would seem. The Impa of Skyward Sword was nearly killed, as I recall. And we see a lonely old woman named Impaz in Twilight Princess, the only one left in an empty village. We don’t see them at all in Wind Waker.

Yet, for all their suffering, for all the loss and death they must surely endure, they remain loyal. They still hold knowledge and keep secrets. Some of those secrets must surely be ugly and terrifying, based on how one can theorize that the Shadow Temple became so blood-stained under the auspices of the Sheikah. Yet they keep them, and preserve them, and sacrifice endlessly. Though they seem to have vanished, they had left some of those secrets behind for the Hero to find in the upcoming Breath of the Wild.

For that loyalty, that sacrifice, that duty they have never failed to carry out, this is why the Sheikah are my favorite race. 🙂

This entry was posted in 30-Day Zelda Challenge, Challenge Accepted, Games and tagged Legend of Zelda, Sheikah. Bookmark the permalink.