Long ago in a distant childhood, I, Merlin, the word-slinging master of commentary, unleashed an unspeakable fandom. But, a foolish animated network, despite wielding the magical mind of Genndy Tartakovsky, failed to step forth with a conclusion. Before the final blow was struck, they ended the series, leaving all fans forever wishing. Now the fools seek to return to the past, and redo the ending of Samurai Jack. (cue rad music intro!)

“Gotta get back, back to the past, Samurai Jack!”

Yes, I very much enjoyed Samurai Jack as a kid. Could you tell? 😉

In fact, I liked it so much, I came out against the very idea of this concluding arc the instant we saw the teaser, the better part of a year and a half ago. (wow, time flies…)

At the time, I felt that they were deliberately taking the beloved classic and “making it more adult” and whatnot, which I wholeheartedly disapprove of. All the same, as I deliberated on my response, I realized that if I was going to maintain any pretense at fairness, I would have to watch it. On which note, allow me to eat my words.

While an argument can certainly be made, that the concluding arc of Samurai Jack has content which is far less child-friendly than the original franchise, I can’t really find fault with Tartakovsky and the others for using it. Indeed, I recall one of my few criticisms of Samurai Jack was how they so obviously had to cater to and work around the censors. Thus, while the presence of spilled blood, for instance, makes for a rather sudden change, it doesn’t really feel “wrong” at all. Even more, the changes are part of the story, and have a very real impact on our favorite samurai protagonist.

So, as far as my issues with the non-child-friendly content go, I rescind my negative comments. I do caution against showing this to the kids unless you can trust their ability to handle “dark” material. 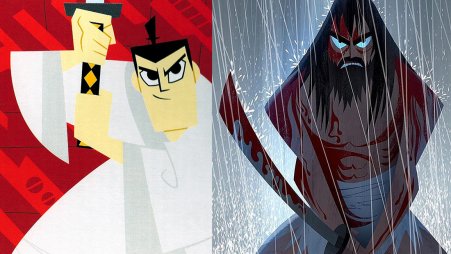 As for the rest, I am mostly pleased with what they’ve done.

If there was one major point against the original Samurai Jack, it’s just how episodic the show is. Very few of the episodes are connected in any meaningful way. It’s a series of one-man adventures that, really, you can just sit down and watch any of them in almost any order at all without missing a thing. I’ve nothing really against that, but it does get a bit difficult to stay invested in something when it doesn’t really go anywhere, ya know? It’s a testament to how good the original show was that we all loved it anyway.

As such, I was quite happy with how these final ten episodes not only tell a single story, but one that is clearly connected to all the previous seasons. One needs to watch these in order and specifically after the rest of the series. Thus, we can invest and find our investment repaid! 🙂

Also, it’s best to just watch all ten of these twenty-minute episodes in a row, all at once. Dang, what a shame! 😛

As for being one-man adventures, that, too, is changed, and part of the story. Not only has the long solitude of Jack’s life clearly taken a toll on him, but now he finally gains a true companion to share his adventures with. That goes into some spoilers which I will skate around, but suffice to say: I really like Ashi! I love the character, her story, and her voice actress, the incomparable Tara Strong. 🙂

Related note, it must be said: no one could match Mako’s rendition of Aku, and Greg Baldwin’s version sounds like a cheap imitation by comparison, but he did his best and it was probably the best imitation we could ever get. No hard feelings, Greg.

“YOU SHALL NEVER FIND ANOTHER AKU! HAHAHA!”

So, while the changes are not perfect by any means, they are not so bad, and even serve to improve the story. Which makes the most crucial question: how is the story?

It is a bit jarring and somewhat disturbing at first, especially coming right off the original series, but the story is both personal to the characters and powerful for the audience. This is a conclusion that has been a long time coming, and its delay has left both hero and villain exhausted. If the stakes weren’t already high enough, they get even higher by the end. The journey towards that ending weaves together gripping tension, thrilling action, touching affection, and genuine humor. Hope, horror, love, and loss all intermingle freely in these final days of Jack’s long journey, as does victory and the tragedy of its ultimate cost.

I do have to say, though, that I think they might have tried to do a little too much with the finale. They brought back almost everyone from the entire series for a final hurrah – which, of course, leaves us wondering about the few faces we don’t see, like, say, the Shaolin Monks – and then left the final fate of most of them unspoken, except for the ones we explicitly see suffer horrible demises. And then pulled the final solution to the series practically out of thin air. And then they make Jack’s victory as bittersweet as possible. And then we finally have the quiet, beautiful ending.

All in all, they did a good job with this, I have to say, albeit with a little fumbling here and there.

Rating: I give Samurai Jack‘s concluding season 8 stars out of 10, and the same for the series as a whole.

This entry was posted in Anime and Cartoons, Tuesday Review and tagged Samurai Jack. Bookmark the permalink.