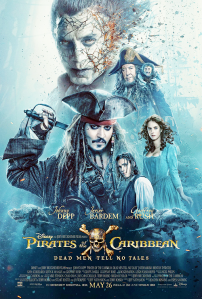 I was pretty excited for this movie. Not, like, absolutely ecstatic or anything, but excited. As I’ve really enjoyed the entire Pirates series, I couldn’t really miss the fifth, and possibly final, addition to the franchise.

So, what did I think of Pirates of the Caribbean: Dead Men Tell No Tales?

Short version: I enjoyed it. It’s nothing really phenomenal or fantastic, but I like it well enough. 🙂

Tales has all the bits and parts that we’ve come to expect and enjoy in a Pirates movie. It has zany, over-the-top action sequences. It has wit and cleverness. It has supernatural creatures and treasures and wonders and horrors and legends of the sea. It has a rather obvious coupling. It has British sailors. And it has a colorful cast of characters, all competing with each other to further their own agenda, not the least of which is Captain Jack Sparrow. It has all the moving bits.

If you want a good pirate-themed popcorn flick to while away a boring evening, then you will not be disappointed.

And yet it feels… lacking.

Other fans right now:
“You dare to criticize this movie?”

I think they just tried to do too much with this film, and didn’t give proper time to any of it.

The action, for instance, always felt important to the story in previous Pirate films. Indeed, the action could tell a story in and of itself. But in this one, it just felt like something that happens. It was just stuff. It was still entertaining, but not enthralling.

The same holds true for the wit and cleverness. The wit was funny, but less poignant, and the cleverness did less solving of problems and more figuring out how someone else had already solved the problems.

The supernatural creatures? The undead. Again. The treasures? They just kind of threw those in and didn’t really linger on most of them. They also retconned Jack’s compass a bit. Wonders, horrors, and legends? No subtlety.

The same again for the coupling. Will and Elizabeth were a good couple, and the chemistry between Jack and Angelica was great. But Henry and Karina? Not so much. They were just kind of plopped together and people said they were an item, but I couldn’t really buy it.

“We’ve been forcefully tied together in more ways than one.”

I was also rather disappointed in the British sailors in this film. Previously, they were many things, but they made them even more uptight than usual, and absolute idiots as well. A little depth and competence, perhaps, would not have been a bad thing.

And the characters. Henry was trying to save his father, Karina was trying to fulfill a quest that wasn’t ever supposed to be hers in the first place, Jack was trying to survive, Barbossa was trying to protect what was his, the villain was just trying to kill everyone, and everyone else was just looking out for themselves and it was all very messy and quick and the plot was all over the place and they just went from one thing to another to another to another. Don’t get me wrong, I’m a fan of keeping thing going at a fast pace, but it doesn’t hurt to take a little time to develop the characters, ya know? Barbossa’s development, especially, was very sudden.

And still they threw more stuff in that left me thinking they didn’t think this all through entirely. What was with that tribute thing? Who the heck was that witch? How did Henry’s father happen to not drown when the curse was broken? What cursed the villain and how? And how was there apparently a gap of fifteen-ish years between World’s End and Stranger Tides? How did Barbossa know how to restore the Black Pearl, and what happened to the rest of the ships? If the monkey was trapped in the bottle with the ship, how did any of the crew not get trapped as well? Does the trident rule the seas or does Kalypso? How did no one ever stumble onto that island? What was the deal with that map in the stars being so time sensitive? How did Jack, Henry, and Karina all happen to end up in the same town, all facing the gallows? How did the dead ship catch up with the Pearl? And did they really just try to open up for another sequel right in the post-credits scene?

Yes, if you really want to enjoy this movie, it’s best not to ask questions.

“I may be dead, but even I can tell that this script needs work.”

So, I’ve been basically ragging on the movie for this entire review. I want to backtrack a bit, make myself clear. I liked this movie. It’s just that I only liked it, not loved it. And I think what gets me most about it that, instead of getting a flowing narrative, we got a tale too jam-packed to flow, it just stumbles about. And while they used material from previous films, they didn’t build on it at all. That’s why they had to toss in everything that comes out of nowhere.

As for what I liked, I enjoyed how they spruced up the ghost pirates and their ship, as the way it attacked reminded me of some sea creatures opening up and devouring their prey whole. I can appreciate a story that means to say that the greatest treasure on the seas isn’t jewels or ships or power, it’s family and freedom. I did like the action and the humor, and they did at least try to up the ante there. And the actors, with what they were given to work with, performed splendidly.

It was also very cute to see Captain Jack and Jack the Monkey finally get along, if only for a moment.

Ultimately, I say again: I liked it. I enjoyed it. It’s nothing phenomenal, and it felt a little lackluster compared to the rest of the franchise, but I like it in spite of its flaws.

“I was in the freaking trailer, and I got barely a minute of screen time…”

This entry was posted in Movies, Tuesday Review and tagged Dead Men Tell No Tales, Pirates of the Caribbean. Bookmark the permalink.