I Bring the Fire Part I: Wolves 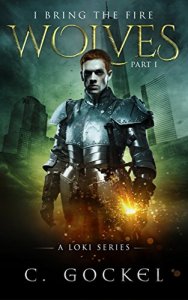 So, a little while ago, I decided to specifically try more urban fiction. That experiment, which I will elaborate on at some other time, has not gone so well. This review is about one of the better titles said experiment led me towards, and I would describe less as “urban fantasy” and more as “fantasy walks into an urban setting.”

I Bring the Fire Part I: Wolves, by C. Gockel, begins the story of Loki, Norse God of Mischief, including his time in modern-day Midgard (Earth) and his vengeful quest to destroy Asgard.

Actually, not so much.

Looking at how that sounds, let me be clear in what I mean by that: there’s plenty that I enjoyed about Wolves, it merely happens that “epic” is not one of them.

At two hundred and fifty pages, the story feels at the same time dragged out and too short. The pace might be just a little bit too slow, and just when things really start getting interesting, it peters out and ends on a cliffhanger that is rather lacking the cliff.

As the rather obvious beginning (and nothing else) of the tale, of course the seeds are sown for the greater mysteries that will somehow help to shape the conclusion of the series. Some of them are mysteries that, really, are a bit out of our league so early on, involving the shifting of cosmic forces and such. Others are more obvious, such as the strange connection Loki feels with the Queen of the Elves, which is somehow tied to his true, secret origin. And then there’s what happened to Loki’s friends and family, the inciting incident of all of this. It’s rather obvious. Oh, and then there’s Baldur.

Speaking of, shifting to a more positive note, I do like this take on Loki as a person. I love this version of the mischief-maker, and how they manage to explain even his most nefarious deeds as being more justifiable than one generally thinks they would be. Of course, that gets very tricky when his worst and most legendary deed is killing Baldur, the God of Peace. Making something like that any less severe involves, by necessity, changing the character of Baldur as well as Loki. In the case of the former, they succeed in making him something infinitely more terrifying and vile. In the latter case, they emphasize the one thing most crucial, above all, to turning a villain into a proper protagonist: his humanity. He is driven by very human things, not the least of which is a long lifetime of loneliness and betrayal, as well as the repeated loss of people he has truly treasured.

It would seem that behind the cocky grin, and behind the cunning, there is a great deal of sorrow, anger, and pain.

Enter the female lead: Amy Lewis. She’s a normal human, with normal human concerns, like paying her bills with the contents of her rapidly diminishing bank account. At first glance, the only special thing about her is her appearance (Loki often notices how well-endowed her chest it, and Thor comments on the same). In fact, she can’t even protect herself very well, not even from a human villain, an encounter which is partially responsible for her first meeting with Loki.

However, for all her normalcy and weakness, Amy has a kind heart and a knack for keen insight. She sees past the surface, the glitter and glam, to grasp what lies beneath. It’s something that Loki seems to find quite attractive, even more so than her ample bosom.

In short, she could well prove to be just the person Loki needs in life in order for his heart to heal.

And it’s one of the rather obvious things we can expect, that they’ll hook up at some point, whenever that turns out to be.

So, I suppose my biggest qualm with this, outside the pace, is how there doesn’t seem to be much in the way of subtlety. Almost everything, most especially the true fate of Loki’s family – yeah, they’re not really dead, not remotely, I am certain – is painted out in big, bold, neon lettering.

I still enjoyed the story, and the way much of it was told, but there is room for improvement. I’m somewhat curious about the end of the story, but not urgently so, and that’s even knowing I could get the entire saga all at once and read straight through. Some things, I have to command myself to wait for. This is not one of them.

This entry was posted in Books, Tuesday Review and tagged C. Gockel, I Bring the Fire, Loki. Bookmark the permalink.

1 Response to I Bring the Fire Part I: Wolves