My one-episode rule can sometimes be tricky. When I tried Diabolik Lovers, for instance, that anime passed the test, but then became one of the few anime which I truly hate with the burning intensity of a thousand desert suns. When I saw the first episode of this anime, I knew I was going to need to binge a few episodes at once to see if it was really worth my time.

Attack on Titan is absolutely not for everyone. As the story thus far centers around the war between humans and the giants who eat them, not really caring it they’re already dead at the time, there is a great deal of content which is graphic, violent, intense, and deeply disturbing. But the story it tells is riveting and powerful, showing humanity at its best and worst simultaneously. If you can make it past the first half dozen episodes, you can get used to it, and start reaping some serious rewards for your patience.

Basically, if this doesn’t sound like your kind of thing already, just from this much, then you should probably stay away. But, if you are intrigued, it may well be worth your while.

Before diving into the meat of this, a small aside regarding the translation of the title.

The title Attack on Titan is a bit inaccurate, and one that annoys me every time I hear it. The literal translation of the Japanese title, written as “Shingeki no Kyojin” in English, is “The Giant’s Advance” or “Advancing Giant,” comprised of characters that mean Advance-Shock (or “Attack” or “Advancing”) of Large Man. It means the giant is the one doing the attacking, invading, advancing, not that the giant, or “titan” is being attacked. Honestly, “Attack on Titan” sounds like it should be about the invasion of place called Titan, like Saturn’s moon or something. But I suppose while “Advancing Giant” or “The Giant’s Advance” or even “The Giant’s Attack,” might be perfectly ominous, it might not jive so well with English-speaking audiences. Perhaps that’s why they changed it. But how about “The Titan’s Attack,” eh?

Ah, whatever, I talk too long about something that it’s too late to change anyway.

Moving on, Merlin. Moving on.

The story follows the men and women fighting against the titans, as the giants are called. Humanity, or what’s left of it, is apparently huddled in a single place, behind three massive walls that protect them from the titans’ ravenous aggression. Some people, however, dream of leaving. They dream of freedom in the wide world beyond the walls, but for that to be anything remotely resembling feasible, let alone safe, the titans need to be wiped out. And so the war has been going on for a century or more. In that time, much of humanity has become complacent, luxuriating in their comfort and safety, their bounty, even deriding those who want to go beyond the walls. Sure, there are still outlaws and bandits, but no titans coming to eat them. What more could humanity want? 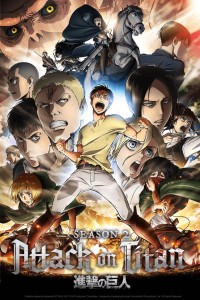 Well, then comes the great tragedy that shows humanity that they aren’t really safe. Titans unlike any they have seen before, stronger, smarter, and far more massive, lead an invasion, breaching the walls, shattering the illusion of humanity’s safety, and crippling their prosperity. Among those who witnessed the atrocity firsthand are our first main characters: the trio of Eren, Mikasa, and Armin.

Driven by revenge, by a desire to see the titans wiped out, humanity safe, and their own freedom to explore the world, all three youths join the army. With these three leading the charge, not only had the titans best beware humanity’s wrath, but the horrible secret truths behind the titans may just come to light as well. Indeed, humanity may finally be on the brink of victory even as it faces absolute extinction.

I haven’t spoiled anything just yet by the way. There’s a lot that can be said about this anime without spoiling it. I will say, I do have a fan theory about the true nature of humanity’s worst enemy, but that might spoil a great deal, so I will keep it to myself for now.

One thing I will spoil is: the freaking huge body count! Seriously, it is staggering, and every single death is absolutely horrific, bloody, and terrifying. It makes Game of Thrones look like a Sunday picnic!

But, again, it’s pretty well worth it. The story is gripping – as it should be with the threat of horrible death looming over everyone, and I mean everyone, no one is guaranteed to survive – the plot is intricate, the intrigue is… well, intriguing, the characters are fantastic and believable, the world is well constructed, and the entire narrative is just very well told.

Whatever my qualms with the content, and how there are just a couple things I think we can safely predict, after watching the first season, and the recently-completed second season, I am quite interested in following the anime through to its conclusion, which I hope they will do properly in due time.

This entry was posted in Anime and Cartoons, Tuesday Review and tagged Attack on Titan. Bookmark the permalink.