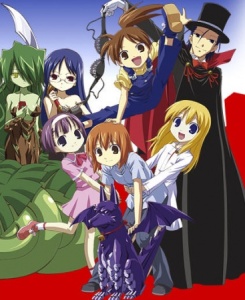 Airing back in 2006, Gargoyle of Yoshinaga House is a child-level dramatic comedy, featuring the adventures which surround its titular character. Named “Gar,” short for gargoyle, he is a living statue, modeled as a winged wolf, who acts as a guardian, or “gatekeeper,” of the Yoshinaga household. Between himself, the family, their friends, and their community, things get pretty hilarious, and usually in a way that is ridiculously child-friendly.

By that last, I mean that there are some things which are technically dangerous happening, but one eventually learns that there’s no real need for tension. Nobody gets hurt. Everybody comes home perfectly safe. And there are only two “bad” people in the series who are actually bad.

But, it also has one joke I can think of which is not exactly child-appropriate, featuring a magician-like thief who frequently steals the bra off a particular woman. Which, personally, I think is less humorous and less child-friendly, rather trivializing something that, in the real world, would be grounds for a sexual harassment charge.

Outside that, however, the entirety of the show is quite certainly crafted with children in mind. The result is pretty campy, not always in a way that works, but still pretty funny at times. Being so childish and campy, I wasn’t really able to binge the entire series all at once, but I was never averse to watching the next episode in a little while. What I enjoyed outweighed what annoyed. And speaking of what I enjoyed…

Most obviously, there’s Gar. As an artificial creature created through alchemy, his perspective on people was interesting, and I enjoyed the obvious honor he sought to live up to within his station. His interactions with the Yoshinaga family – a talkative, ridiculous father, a quiet mother of surprising physical ferocity, a soft-spoken son, and, the main character of the bunch, Futaba, a violent tomboy of a young daughter – were very entertaining, and the primary force behind the development of Gar as a character. It’s not easy making a talking statue an entertaining lead character, but they did it.

Also, Gar and the Yoshinagas develop relationships with some other colorful characters. There’s an obscenely wealth businessman, with a host of maids, who used alchemy and technology to create his own talking statue, modeled after a winged lion. There’s the phantom thief I mentioned earlier, who rescued a young girl about Futaba’s age, Lily, from her evil mad scientist father. Lily has another guardian angel of sorts in a headless robot her father built, called Dullahan. There’s an alchemist who creates a plant-based woman, rather stupidly named Osiris (really, you named a plant-woman after the Egyptian king of the underworld?). And, of course, there’s the alchemical mad scientist who built Gar in the first place. Toss in all the “normal” people of their local community, both a colorful cast that runs a nearby shopping district, and the statues and animals which Gar can converse with, and it’s a pretty lively neighborhood the Yoshinagas live in.

Which goes into something I really like about this anime. It follows a handful of people, but it feels more like it’s about this amazing, friendly community. Incredible things happen here every day, especially with the introduction of Gar and the host of people and creatures interested in him. They all show respect and love to him and to each other, and so they’re like one big, happy family.

Is this a particularly epic anime? No. No, it’s not. But not every anime needs to be. Not every story needs to feature endless drama, danger, and tension. It is a touch disappointing when they sort of promise things like that, and then don’t deliver. But, really, this story doesn’t need all of that in the first place.

This entry was posted in Anime and Cartoons, Tuesday Review and tagged Gargoyle of Yoshinaga House. Bookmark the permalink.