Overlord is mostly a fantasy action/adventure anime, but tilted on its head to tell the story from the villains’ perspective. It borrows just a little from the trope of a gamer getting stuck in a game that becomes real, but in a way that it hardly matters, so it’s pretty much just a fantasy turned upside-down.

The story centers around an undead lich, the last of a collection of “supreme beings” who formed a guild called Ains Ooal Gown. He takes that name for himself, casting aside his old name, and intends to conquer the fantasy world he finds himself in, using the army of minions left to his command. Part of this is a worldwide search for anyone else who might have been trapped in this world with him, but he also fully intends to rule the world and adorn the lair he and his former comrades made in all the riches of the world. Being the last of his kind, he is very lonely, and intends to make his conquest and the to-be-adorned lair a tribute to his old friends.

So, already we have a complete reversal of the usual narrative, following the side that has monsters and is set on world conquest. Many of the usual things are brought in and played with throughout the narrative. The band of adventurers, the great creature that rules the forest, the company of loyal soldiers and their noble captain, the villagers in need of help, the great theocracy that naturally, and automatically, will be the undead lord’s most dedicated enemy, secret orders, cults, thieves, insane murderers, etc. Each of these is brought in, with varying degrees of significance, and played with, sometimes for comedic effect, sometimes to get us on the Ains’ side as he takes on other villains, sometime to add meat to the bones of the overarching plot.

I can’t really go into specifics without spoiling things, so we’ll end the plot summary there. 😉

I largely enjoyed Overlord. Only the first season has come out thus far, and I eagerly await the second.

It’s a fun idea, telling this kind of story from the side of the lich, the monsters, the minions, the would-be conquerors. Take any story, in a book, a movie, a game, a television show, they’d be the villains, and they certainly are that here. They are ruthless and brutal and treacherous, the stuff of nightmares, they think little to nothing of human life at all, let alone the lives of the people in their way, and they are exceptionally powerful. Oh, and they mean to conquer the world. That’s a big one.

Whether or not they can conquer the world remains to be seen. If it were just a matter of their warriors’ individual battle strength, they could probably do so with relative ease, because, again, they are powerful. They absolutely exceed anything and everything humanity could throw at them. However, they have limited resources and only one lair to work with, and they can be matched, if rarely, so the odds could swing either way without warning, I’d say. That is both good and bad. In fact, I would say it’s Overlord‘s biggest weakness thus far.

For any conflict to be truly interesting, the two sides need to be somewhat comparable to each other. I say that knowing well the feeling of absolutely overwhelming the enemy – thank you, Starcraft – and as nice as it is to have an undisputed victory of your own, the most entertaining ones to watch are more evenly matched than that.

The first time Ains takes to the field, he absolutely overwhelms the enemy, and they weren’t exactly low on the pecking order of the world. That was fine, it established how powerful he is. The next few times are barely skirmishes by comparison. Towards the end, he not only defeats but actively mocks his enemy right up to the moment of his victory. At this point, while I liked seeing that particular enemy bite the dust, it was starting to get boring, seeing him dominate every fight. It isn’t until the last fight that we see him actually pushed towards his limits, though still not pushed all the way to them. That was easily the most entertaining battle yet in the series.

So, Ains is certainly powerful, but perhaps he’s a little too powerful for a lead character. 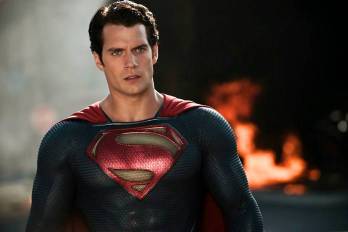 Not like we know any *other* lead characters who are so powerful and yet so boring.

As for the other characters, they look interesting, but we haven’t gotten to know them yet, not really. We’ve seen them, and we’ve seen some indications of what they can do, but there are over a dozen characters paraded in front of the camera from the start and it barely settles on any one of them for very long. We get a feel for some of them, but not much. Seriously, when one of them suddenly became a near-constant at Ains’ side, I didn’t even recognize who she was, because we’d barely seen her at all before that point.

On the other hand, there are some key moments. The camera doesn’t settle long on the other characters, but it makes those moments count. We see how they behave, how they think, how they interact, important choices they make, and, most of all, we see how they view Ains. That relationship is key to whatever happens as the story moves forward. It explains not only why they serve him, but also why that loyalty is reciprocated. Ains is pretty cold-blooded, but he looks after his own. Heck, even without really valuing the lives of others, he can still admire the people who try to be strong.

That sort of connection between Ains and others, that human-like element to him, is how the audience is able to connect with him and his minions. That, I think, is Overlord‘s best feature, showing the humanity, such as it is, within the monsters. That is what I like best, and what I found most interesting. The fights, of course, are nice, and well done. The setting is intriguing, the music is entrancing, and so on and so forth. But the characters are what draw me in, and I want to get to know them all better. I am interested in the end of this story because I am interested in them.

And that is why I look forward to the next season.

Basically: Overlord is an unusual take on the usual fantasy stories. It takes the characters we usually root against and makes them interesting. I think it could be improved, and it would have been better to just discard the idea of it being a game that became real, but I remain spellbound nonetheless.

This entry was posted in Anime and Cartoons, Tuesday Review and tagged Overlord. Bookmark the permalink.