Slayers: I Still Love It 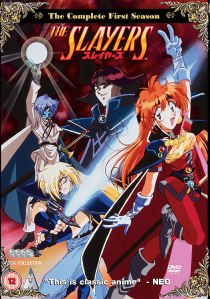 I think this is the first time I’ve reviewed an anime either this old or this famous. Popular when it aired, a lasting cult favorite of its fans, and somewhat based on the manga by Hajime Kanzaka, this is a classic anime from the mid-to-late 1990’s. It spans thee series (much like seasons), as well as five movies, two OVA series, and it was resurrected for an additional season-length story divided into two series in 2008 and 2009. It may not be too much to say that it redefined its genre and perhaps the anime industry as a whole.

So, really, there’s not that much more I can add to the conversation, is there? But I’m feeling nostalgic, and as so many classics tend to go unseen by succeeding generations, I just want to say that this franchise still has plenty to offer even two decades later. Besides, if/when I ever get around to that list of favorite anime, it won’t hurt to have some of my older favorites already on record here.

Slayers is a medieval fantasy adventure in a similar vein to Dungeons and Dragons, but it’s anything but typical. The story follows the escapades of the sorceress Lina Inverse and her friends as they roam the land, fighting evil monsters, saving the world, annihilating bandits (and stealing their stolen treasure), leaving more than a little collateral damage in their wake, and eating copious amounts of good food.

“Buckle up, boys, I’ll fireball you into next year!”

Lina herself is a young, red-haired woman of particular power and ability. From the moment we met her, she quickly became the reference point for any strong, clever female that was prone to sudden violence, especially large explosions. (When I was watching Wall-E for the first time, and we met Eve, and she went from dancing in the air to instantly shooting a laser that made a huge explosion, my reaction was, “It’s the Lina Inverse of robots!”) Cocky, cheeky, fiery, greedy, playing up the cuteness, and slinging fireballs at her enemies/victims – one can’t help but feel a little bad for the bandits when the Bandit Killer finds them – without a trace of remorse (a foreign concept to her), and with a bit of human decency on top of all that, Lina is the epitome of a bad girl who’s actually good, and we love her for it! Certainly no damsel in distress is she (which idea they poked fun at in the very first episode), and even more remarkable for a female lead in the 90’s. (this was before even the likes of Buffy the Vampire Slayer had made female heroes “cool”)

Over the course of her journey, Lina makes friends (some of whom last awhile) and enemies (most of whom do not last awhile) with a cast of people every bit as colorful as she herself is. Among the main, recurring group, we have a swordsman whose idiocy is actually endearing, a princess so pure and fine one would think she’d be Lina’s antithesis but they get along well, a cursed sorcerer-swordsman whose cool, collected intelligence hides his inner pain, and a monster priest who is in turns hilariously mischievous and frighteningly diabolical. We love all of them, and most of the rest of the cast, but I particularly like those last two. 🙂

There were times, I must admit, when I found certain characters to be just a little annoying. An obnoxious princess, for instance, who thought she was Lina’s archnemesis, she was a bit too over the top. And a particular priestess and healer, for some reason, just annoyed the heck out of me. But those two both faded out after the second series, thank goodness. And Lina’s rival/companion in the movies had a laugh that I just detested, though I liked her character well enough otherwise. Generally, though, I just couldn’t get enough of our heroes, and I enjoyed the later additions of a dragon priestess and a sorcerer-prince trapped in a most unusual form. 🙂

As for what all these lovable weirdos get up to, well, each series and movie is pretty much a self-contained story. There’s some benefit in seeing what came before, but it’s not really necessary. Heck, my first introduction to Slayers was when I happened to see some episodes towards the end of it’s second series, Slayers Next, and while I noticed that there was a lot that must have happened already, I didn’t really feel lost at all. And then I caught some particular episodes in Slayers Try, and still didn’t feel lost despite the enormity of the events playing out before my eyes. Eventually, I managed to get my hands on the entire series and watched everything from start to finish, and it was great fun. 🙂 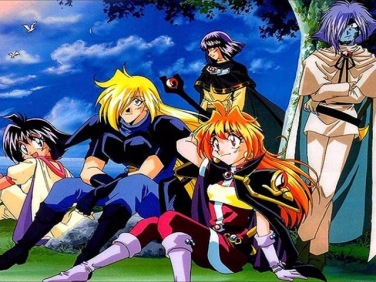 “We’re just taking a breather between our adventures and fun and saving the world!”

Though, when something as major as Lina’s potential coupling with one of her friends has such a pivotal role as it did in the end of Slayers Next, and then we never hear about it again… yeah, small let-down that. 😦 Then again, perhaps Slayers does better when the love stories are mostly in our heads.

The quality of the stories, and the technical qualities, can vary a bit from one series to another. The OVA series, for instance, were easily the weakest of the entire franchise in terms of storytelling. The series and movies are generally much better, though occasionally choppy, and there are obvious times where they were extending a joke out for as long as they absolutely could before delivering the punchline. There’s times when things come out of nowhere, like the one villain destroying an entire town and then quite suddenly displaying an additional mouth in each hand at the climax. Things like that… we need a little warning sometimes, ya know? Then again, there were a number of “plot twists” that we saw coming a mile away, so there wasn’t that much surprise, so I suppose they just had a problem balancing the two extremes. 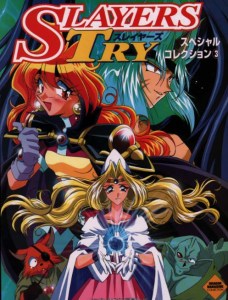 Things have already improved by leaps and bounds by the third series.

Also, one also does, occasionally, wish for something more creative than simply using a stronger spell to defeat one’s enemy. Like in Slayers Revolution, when they couldn’t attack their enemy with magic directly, they instead made it rain and froze the falling water around him. I like that, very much. Usually, though, it was just “let’s access a stronger source of magic!”

The technical quality of the show also improves more and more as it goes on. The animation is generally pleasant to see and flows well, and there’s a world of difference between the first series and the last, these being separated by over a decade. The voice acting is very well done, though, again, I prefer the later portions of the series. Lina was always great, super kudos to Lisa Ortiz, and most characters were consistently good, but there are others that clearly either had a change in voice actors or the voice actor suddenly took a new approach to the character, whichever.

I’ve pointed out a few flaws, but I want to be clear: they’re not so frequent, they’re easy to forgive, they’re outweighed by the fun of the show, and things tend to get better instead of worse in Slayers.

The characters are pretty much always lovable, as I’ve said. Their antics are hilarious, their adventures are exciting, and their fights are entertaining, whether it’s the one-sided annihilation of bandits of unlucky bandits or a desperate fight against the all-consuming insanity of a god of evil that wants to destroy everything. It’s a wide range to cover. Oh, and the music is fantastic! 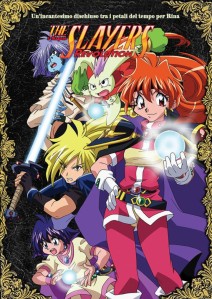 There are also some surprising discussions to be found in the material, such as the nature of good and evil, and who on which side is really what they claim to be. Some nefarious characters display a certain kind of nobility, and some supposed saints are anything but, and Lina herself is so unorthodox, with a well-earned reputation for destruction, that some people can easily confuse her with a villain, yet she is the outstanding hero of the story, flaws notwithstanding.

So, if you have been unlucky or inexperienced enough to not watch Slayers yet… you might want to steer clear of the OVAs, but otherwise pick up a copy and enjoy the show! 🙂

This entry was posted in Anime and Cartoons, Tuesday Review and tagged Lina Inverse, Slayers. Bookmark the permalink.

5 Responses to Slayers: I Still Love It