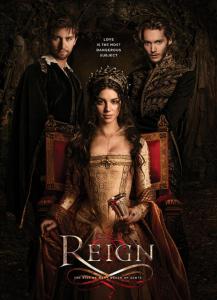 I have mentioned Reign before, but, looking back, my first post was only half a review and half an introduction into my weekly lineup. I eventually dropped it at the end of its second season, but I’m a stickler for details, so I figure I might as well give it a proper, unadulterated review.

Obviously inspired by The Tudors and its like, Reign is a historical fiction, a dramatic reinterpretation of the reign of Mary, Queen of Scots, who was married to King Francis of France, and who was a notable opponent of Queen Elizabeth I of England. The Queen Elizabeth. Mary, her husband, and their friends and family must deal with issues of war, plague, famine, dark cults, paranormal incidents, insane people with power, political rivals and enemies, rebellions, religious turmoil, international relations, etc. And, of course, their interpersonal relationships.

It took a little time for the show to grow on me, but I enjoyed it more and more throughout its first two seasons. It can be a bit off-putting when they set events to period music one moment and modern pop hits the next, but they improved on that, and one grows accustomed to it. The plot needed time to develop as well, but became fairly intricate. The number of disparate threads they juggled, the long and complicated events, and how they all wove together to create a climax and conclusion, it was all superbly well done.

Thus, in later seasons, it was a little disappointing to see how those threads eventually fell apart and became more and more distant from each other. It was also disappointing seeing almost everyone either die or get written out completely in due time. But most of all, it eventually became too tiresome to see everything, all of this fantastic material, not only get overshadowed by but revolve around who the women sleep with.

Really, that’s my biggest complaint about this show, how the plot basically hinges on the female characters’ love lives. I mean, seriously, they make virtually everything revolve around their courtships, desires, and marriages. Religious tension? One of Mary’s ladies, Greer, marries a Protestant (after a long, torrid love triangle which they beat into the ground, and then keep beating, before finally ending it, then bringing it back just long enough for another beating). Political rival? Another lady, Lola, gains the interest of one, after she’s been bedded by the king, before he was king, and at a time when he and Mary weren’t together. The list goes on, including Mary herself, her last lady, Kenna, a princess, Mary’s mother-in-law, eventually Elizabeth as well, and on and on.

Almost everything else takes a backseat to the issue of who beds who. It gets, as I said, tiring after awhile.

That said, I really did enjoy the show, at least for awhile. While what the plot revolves around may irritate me, and eventually helped convince me to stop watching, I still find it thrilling as the protagonists try to navigate some complex issues and their own emotions, to rule a country and decide the fate of many people. The suspense can be thrilling at times, as we only really know the final fate of the most historical characters, and they often deviate from history in ways which they then have to cleverly sweep under the rug. It’s the drama of nations played out on a very personal level, and there’s just something very compelling about that. 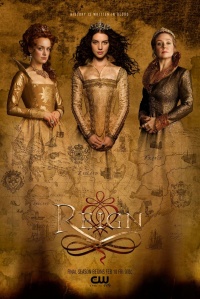 Of course, some liberties they take may strain credulity a little too much. I think the one that really bugs me is their depiction of Elizabeth. Not only is she England’s most famous monarch, whose reign became the golden age of her country, but she had also been Mary’s personal bogeyman in the series, always threatening and dangerous. So, when we got a version of Elizabeth I who was selfish, short-sighted, treacherous, impetuous, self-pitying, ruled by her emotions and desires, a cruel, weeping, overgrown girl, in short, an Elizabeth who is, frankly, weak… well, it kind of put a damper on things. I have no idea what the woman was like in real life, but I have difficulty believing any depiction of her as weak.

In a similar vein, I always wondered how they’d handle the eventual conclusion of the series. It would be a little difficult to continue the series, after all, after executing the lead character in accordance with well-known historical fact. That answer was provided when the series finale simply jumped forward several decades to Mary’s execution, and depicted her soul’s reunion with that of her dear husband Francis afterward.

One last thing to mention, I do still like how they treated the supernatural element. It’s present and powerful for a great deal of the show, yet things are almost always explainable in due time. Thus, we are left with the room to debate how real these mystical forces are.

All in all, I found Reign to an enjoyable drama and period piece, albeit one that could have been severely improved with a few alterations. It was thrilling and suspenseful for awhile, and they recaptured some of that to a degree from time to time. It is only unfortunate that they couldn’t maintain its better qualities for the entirety of the series.

This entry was posted in Tuesday Review, TV Shows and tagged Reign. Bookmark the permalink.