This show concluded just earlier this year, after running for twelve seasons straight. Not an inconsiderable accomplishment, that. Kudos.

Bones is another one of those crime shows with a quirk, this one involving the work of a forensic anthropologist and her team at the Jeffersonian Institute. They’ve usually dealt in examining older human remains, but now, in conjunction with local FBI, they solve murder mysteries, combat government conspiracies, and bring serial killers to justice. The mysteries and menaces they face provide fodder for social commentary, discussion, and exploring unique niches in our society. Also, several of the characters eventually fall in love with each other and build lives together.

I like this show. Really, I do. There’s plenty to recommend about it. But, there are still some things which were left to be desired.

The best part of the show, as with so many others, was the characters. They were so smart, each in their own way, and yet so clueless in other ways. Dr. Temperance Brennan, for instance, was the biggest brainiac of the bunch, with a knowledge base both broad, deep, and detailed, yet she lacks a working knowledge of living people and the subtleties of human interaction. In contrast, her partner, Agent Seely Booth, has less working knowledge of science and history, but he understands people and values his instincts. The two of them work well together, tempering and adding to each other. Small wonder they eventually get together, get married, and have kids.

A similar couple is that of their closest and dearest friends and colleagues, Jack Hodgins and Angela Montenegro. Hodgins is less awkward than Brennan, but he’s still very scientifically-inclined and loves it. Basically, he’s the epitome of a cool geek. Angela has a more artistic soul, and the sort of fire and resolve needed to both empower Hodgins’ better qualities while also restraining him from his more grand and dangerous stunts.

That’s one of the chief virtues of the cast of Bones: individually they are intelligent, but together they are wise. When one of them is falling, the others are there to catch them and bring them back up. They endure and overcome everything life throws at them, including deadly enemies, the loss of loved ones, and all manner of upsets and changes in their lives, because they stand together, one big family. 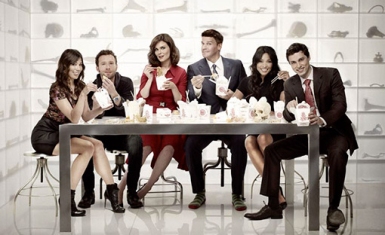 Yes, I definitely watched this for the characters. 🙂

Plot-wise, there are a few things they could have done better. The vast majority of the series is severely episodic, with extremely slow developments, if any. Sometimes a serial killer comes back as a recurring villain – a very dangerous and disturbing recurring villain – but it feels rather infrequent, and therefore always sudden when they return.

They also encountered vast, intricate government conspiracies, and that can certainly amp up the tension when these scientists and agents are up against people who can send military teams after them, but, again, it’s not a frequent thing. Heck, I recall a moment where they finally cut the head off one such shadow organization, and I couldn’t help but wonder if this was the grand puppeteer behind all the rest, or if there were more than one conspiracy.

Now, it would only be fair to mention that, really, not many crime shows out there actually have an overarching plot in the first place. Indeed, most shows on TV will only touch on their plots once every so often. Even my favorite shows are guilty of that, and they’re certainly guilty of developing their characters’ individual storylines very slowly. But somehow it feels even worse in Bones. How long was it before we had our first recurring villain, and how long did they last? How long was it before we encountered the first conspiracy, and how well was that thread ever really tied off?

Subtle, they were not.

And how long, how long, how long was it before they officially paired Booth and Brennan together, despite constantly talking about it? Heck, they couldn’t just put Hodgins and Angela together either, they had to take all these twists and turns and other couplings, and they did pretty much the same thing with every coupling, but it got especially annoying with Booth and Brennan, as they kept talking about it instead of actually doing anything. And it was confusing, why were people so obsessed with this? That was eventually answered when they aired a tweaked version of what was supposed to have been their pilot episode, but even then, it felt like they’d been making a big deal of something fairly small for years.

The real cost of the slow, episodic progression, however, only really hit me when I was binging the show to catch up with it. I mean, I binge-watch NCIS, and I love it. I binge-watch Castle, and I can’t get enough. I binge-watch Bones… and I’m usually Bones-ed out well within a season, wanting to watch something else. It’s not like the other two shows are known for advancing things at a rapid pace, or having overarching plot in every episode, but somehow, Bones just failed to keep my interest riveted for too long.

This is one of those shows that really earns any teasing it gets for taking so long to advance the plot. Seriously, my favorite part of the show’s run was towards the end, where they had at least as much development in a dozen or so episodes as they’d had in the previous eleven seasons combined.

I can appreciate how things eventually developed, though. Working relationships became friendships, recurring side-characters gained more and more depth to them, people got married and had families, people suffered losses and made their way forward anew, some characters learned new skills, and the entire family of the cast just kept growing. I especially liked how they began setting up the next generation of agents and scientists to follow in their predecessors’ footsteps, to carry the torch.

Of course, with such a large, rotating cast, it’s inevitable that some of them would eventually fall through the cracks. I wondered sometimes what happened to one character or another, because it was so easy to like them. Sometimes those questions were answered well enough, sometimes the answer was tragic, and sometimes we just never saw or heard from them again. It happens.

On the bright side again, part of me wishes I’d added Bones to my weekly lineup just so I could add my two cents to whatever the characters were discussing in any given episode. A number of them were quite interesting, and there were times I wanted to point out the obvious things someone was missing. For being a show about bones, there was plenty of meat to it. Oh, if these characters were real, I would love to get into philosophical debates with them! 🙂

You just KNOW this lot will some interesting opinions to share!

In short, I just really liked this show. There were times I even loved it. The cast and the crew did a phenomenal job. Of course the dark, morbid content, the bones and blood and guts, and some of the intellectual discussions, might be enough to dissuade some of the younger viewers, or caution their parents against letting them watch it, but it’s generally a good, enjoyable show, and there’s far too much that can be said for twelve seasons to pack into a single, brief review.