Nightblade, by Ryan Kirk, is a low-fantasy samurai story, the first of a series by the same name, and one of the better stories I’ve read. (and not to be confused with other books that use the same title)

The story follows the lives of several characters over the course of several years. Ryuu, a boy whose family was cut down in front of him and only survived because of the timely intervention of Shigeru, a swordsman who lives deep in the woods and takes Ryuu in as his own, teaching him everything he knows; Takako, a girl whose father sold her to a brothel to pay his debts and feed the rest of his family, who grows so beautiful that she attracts every eye, and whose maidenhead is for sale; Moriko, a girl taken from her family by a sacred order that has become a corrupted tool of suppression, and who is abused and scarred all over her body for no better reason than because others fear her, but also found, protected, and taught by Orochi, an assassin almost without equal in the land, who has a long, personal grudge with Shigeru; and Akira, the young lord of a kingdom, most capable and strong, who has designs he intends to further for the good of the land he rules and the people within it.

Just from that, and that alone, one can tell this is not your usual fantasy story. A girl sold to a brothel by her father? Another girl nearly killed more than once by her forceful keepers? A boy who learns how to shed blood and remain alive through it? A pair of warriors who are lifelong enemies, yet both honorable men? And a lord bent on conquest is a good man? These are generally not things our culture delves into very deeply, not with stories of knights and dragons and princesses. A story about samurai, on the other hand, may venture into them with ease.

This cast, by the way, may not be comprehensive, but it covers almost everyone of note. There are others, of course, especially antagonists, but these people are the ones whom the story revolves around. They may be a handful of people in a single kingdom, in the midst of a long age, but the age is readying a great change, and these people are the ones in the eye of the storm. Any direction they go in, they risk everything, especially their lives, but as the winds rage in every direction, the changing of an era swings on their choices and the consequences of such like a door on its hinges. They don’t just drive the plot, they practically are the plot.

That plot, by the way, yields many discussions about the nature of right and wrong, of what it means to do the right thing, and how far one is responsible for the fallout.

Ryuu, for instance, makes a choice simply to help one person, and that single choice sets off a chain of tragedy, terror, pain, loss, and bloodshed. Yet, everything about the latter is the deliberate decision of his enemies, for no better reason than to sate their ravenous, dishonorable appetite for destruction. Akira, on the other hand, makes a choice to sacrifice the few for the sake of the many, to allow and even initiate terrible injustices because he is looking at a bigger picture. Yet, in seeing that bigger picture, Akira has lost sight of the smaller picture, the ground on which his kingdom stands, and it does not go well for him. Not that he suffers nearly so much as anyone else does, but his plans are dealt some vicious blows, simply because he had his priorities wrong. 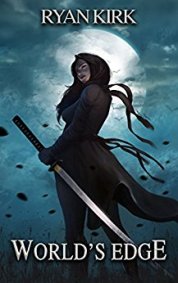 A female samurai is probably going to know a lot about the unfair world.

Meanwhile, Takako learned early on that the world is not fair, and it may be best to just accept it and move on. When she is given hope, that hope comes at a cost far higher than she would have ever willingly paid. The world is cruel, but going against its ways, it would seem, only ignites an unending cycle of violence which begets more violence. Better to endure it without opposing it. Again in contrast, Moriko appears to accept her own fate, especially after the terrible physical ordeal she suffers, but she doesn’t quite give up. She never truly stops wanting to escape, to make her own way, to be allowed be strong, and perhaps even to end the oppressive system which stole her from her family. Even at her lowest, there is still an ember of hope. Yet, that hope, too, comes at a bloody cost.

As for Shigeru and Orochi… well, to avoid spoilers, I will simply say theirs is not a simple story of good and evil, but of flawed, honorable warriors with a tragic past setting them against each other to the death.

Who of these people, if any, can survive this storm they are caught in? If they even survive, can they ever find happiness again? Tragedy and loss abound as these people struggle over what is right, with their very lives at stake.

Their stories are told with a great deal of skill. The language is poetic yet also economical. The imagery is vibrant yet not overbearing. The more sensitive parts of the material are addressed sensibly without drowning the audience in it. The plot is well-paced and brings everyone together in due time and in such a way that it feels natural, and we care about each of them as they collide with each other. I did get a little lost on occasion about exactly how much time was passing for each character, which is a small flaw, but it didn’t matter that much in the end. And I liked how the characters were described in such a way that I was able to imagine and fill in the gaps of their appearance in my head without getting bogged down in details. The focus was on the characters and what they were feeling within this world and these events that they were unable to escape.

Basically, it was very well-written and well-crafted. I was invested in the characters and the plot from the beginning to the end. Ryan Kirk can be proud of his work, and I look forward to reading the rest of this series as soon as I can get my hands on it. Next up, World’s Edge, followed by The Wind and the Void. I don’t know what else he’s written or is intending to write, but I’ll be very interested in that, too.

And there’s still so much more to say! But I’ll mention just one more thing before wrapping up.

I especially like the world he set this story in. It made a great deal of sense, it felt realistic and believable. The “magic” system, such as it was, was also believable and unique, consisting entirely of an additional sense which warriors and healers alike could use to their advantage. It was explained properly, so the use of it was simple but effective.

And on that note, I’ll just simply say that I really, really enjoyed Nightblade. It’s not for the faint of heart, and not for the younger audience, but it’s pretty darn good.

This entry was posted in Books, Tuesday Review and tagged Nightblade, Ryan Kirk. Bookmark the permalink.