Vampires are real, and in the UK they are fought and destroyed by the Royal Order of Protestant Knights, called Hellsing. Led by “Sir” (she’s a woman) Integra Fairbrook Wingates Hellsing, the organization, which bears her name and has long been led by her family, has watched over Britain and the world, commanding fierce warriors such as Walter C. Dornez, who is now a butler, a former police girl and newly-turned vampire named Seras Victoria, and, above all, the ancient vampire Alucard, who has been tamed into service. They clash often with the Vatican’s own anti-monster forces, but they have another deadly enemy on the rise, namely Millennium, the remnant of a Nazi faction which intends their absolute destruction. Open war soon erupts, and consumes the city of London.

Hellising Ultimate is one of those anime with an interesting history behind it.

Following the battles of its titular anti-vampire organization, the Hellsing manga began its publication in 1997 and ended in 2008. An anime adaptation, using the same characters but following a very different storyline, premiered in 2001 and ran for thirteen episodes. After that, someone got the idea of producing an anime adaptation that was more faithful to the manga, and far more epic. Thus, we get Hellsing Ultimate, a ten-episode OVA series which first premiered in early 2006, and did not finish until late 2012. They certainly took their time with it, taking seven years or more to produce ten episodes.

So, with all that time and effort, how did they do?

…well, they certainly didn’t hold back on anything, at all, and every technical aspect of the show is superbly well done, and fans have loved the show, and the vampire Alucard is now one of the most famous of modern vampires, so one could easily argue it was a smashing success and a masterpiece… but, personally, I think it could have been better. As in, it could have been much better. So much.

I think the single biggest weakness of Hellsing Ultimate is simply how unrestrained the studio, Geneon, was in its production. Everything was pushed to the max, everything had to be more “epic,” which leaves us with an anime that holds nothing back, but knows nothing of balance.

It’s a berserker, pumped up and pummeling everything in its path with the subtlety of an avalanche. Formidable, yes, but highly inelegant, imprecise, and the definition of uncontrolled, not to mention they tend to burn themselves out rather quickly. More disciplined warriors may be less loud and flashy, but they are still quite deadly and arguably more dangerous and powerful. Don’t get me wrong, I have a certain personal fondness for berserkers, but I also have a healthy respect for the samurai.

In a nutshell, Hellsing Ultimate is extremely graphic, saturated with horrific, disturbing scenes of bloodshed, torture, murder, madness, and rape, which left nothing to the imagination. And that’s just the beginning. It does absolutely nothing halfway, not the violence, not the disturbing images, not the endless talking, not the comical scenes, not even the long epilogue. It’s always doing everything “epically,” which actually clutters things up and slows them down. 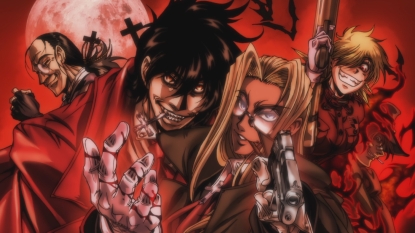 I don’t think this phrase has ever been used more perfectly: this lot makes a bloody mess of things!

So, you can tell, my opinion of the show is not entirely complimentary, but it’s not as though there is nothing enjoyable about it. Not only is is very well produced, with top-notch animation, music, and voice-acting – I’ve only seen YouTube clips of the English dub, but this may be Crispin Freeman’s most masterful work as Alucard – but it’s also not entirely overblown and obvious.

The narrative and dialogue and everything else might overdo everything, yes, but it’s well-constructed at the very least. The three-way conflict between Hellsing, Millennium, and the Vatican, the nature of Alucard’s overwhelming power, the ultimate nature of the trap his enemy sets for him, how everything ties together, it’s all well-conceived and conveyed clearly. Mind you, there are certain details, like how the last act if the show takes place under a rising sun, yet none of the vampires seems to be even so much as singed by the light. Small plot hole, that.

The mannerisms of some of the characters speak to deeper, more subtle things about them as well. Alucard, for instance, often remarks, with complete sincerity, on how beautiful someone is after they’ve grown old. Perhaps, after so many lifetimes of eternal youth, he simply sees aging differently, as a proof of living, and an assurance of eventual rest in the grave. He obviously values something about humanity, even if he’s brutal and merciless towards human enemies as surely as he is towards monsters. He refuses to be defeated by monsters, by anything like himself, but he does not mind being genuinely defeated by humans.

Finally, for all that most of the show is overdone, the moments that I loved the most were generally quieter. One of the closing credit sequences features an old man, very distinguished and holding a lofty position in his organization, going to the grave of his friend, dead for ten years. As he recalls the many memories of the past, he puts three cups on the grave and pours them full of something, perhaps coffee: one for him, one for his friend, and one for another friend, newly dead that very evening. 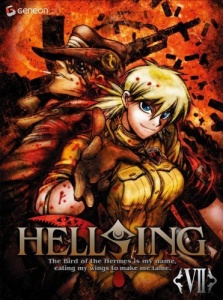 Another moment is where these mercenaries are marching together towards certain death. They go smiling, as comrades, and they’ve already sent their dear friend away on her own part of the mission. They teased her first, and they know they likely won’t live to see her again, but they didn’t tell her that part. They’re not just killing monsters, and they’re not just dying as comrades, they’re still doing what they can to protect her, even as they die. And I love them for it. We didn’t get to know them very well before this, but I love these men in that moment.

It’s moments like that which are the best, and which make us care when the tide of battle turns against their killers in ways I do not want to spoil right now. 😉

That is the real upside to Hellsing Ultimate, as I see it.

The downside, however, is wading through all of those extended scenes of torment and murder and everything else. The blood and gore are overwhelming, and the torture is disturbing, yet not quite so disturbing as a pair of scenes I recall, including a little girl getting raped, and a brute raping the corpse of a woman he just murdered (which was made even more insensible by how he’d just barely lost his eye mere seconds before, so one would think he’d be seeing to that instead).

And still my single least favorite part of the show was the endless talking! It seemed like everyone had a craving for hearing their own voices, making things as dramatic, and droning, and repetitive, as possible. There were so many times I wanted to punch these characters in the face just to shut them up and get back to the crisis in progress.

As I said: everything in this show is completely unrestrained.

I have very much enjoyed shows that have quite a bit of blood and darker, more graphic material to them, such as Deadpool, Logan, and Kingsman, and even Shiki, so it’s not like I’m a fainthearted pushover, I think (or at least not completely so). But there are limits to everything, and Hellsing Ultimate has none whatsoever.

If you don’t mind anything at all about that, then, by all means, you are free to try it. If, on the other hand, you’d rather skip that, then you might want to avoid it at all cost. It’s a personal decision, but this is one of those times where I would have preferred to know what I was really choosing beforehand, ya know? In the spirit of which, in summary:

Hellsing Ultimate has its pros and cons. It is one of the darkest, bloodiest, most disturbing anime I have ever seen or heard of. It’s epic and supremely well-crafted, and the characters, as they get the chance to shine, are great and enjoyable. One had best beware the mature, even inappropriate, content, because once you start watching, you are watching till the end.

This entry was posted in Anime and Cartoons, Tuesday Review and tagged Alucard, Hellsing Ultimate. Bookmark the permalink.