Thor: Ragnarok Hits it… Almost… Out of the Park!

I’ve been wrestling with myself a bit. I went to see Marvel’s latest, Thor: Ragnarok, and I have heard and read almost nothing but absolute praise of the highest order about it. Don’t get me wrong, it’s a great movie and plenty of fun, but maybe not quite that perfect. Then again, there have also been one or two voices I’ve heard raised in disapproval, and they seem perhaps a touch harsh to me. So, I’ve been going back and forth, trying to find my own balance between well-deserved praise and legitimate criticism. I believe I have found it.

Oh, and this is important: Spoiler Alert!

Thor: Ragnarok is the third Thor movie, the third Marvel movie this year, the seventeenth film in the Marvel Cinematic Universe, the fifth addition exactly halfway through its third phase, a precursor to the impending Infinity War coming in May, and a huge, epic upset in this universe. That’s what this movie is, in relation to everything else. And you know, I used to hate the idea of these extended epics, where you have to read or watch so much in order to understand everything that is going on in later installments. It just sometimes felt intimidating, like you have to choose a perfect point of entry in order to enjoy the full experience. That bothers me a bit less now, but I digress. 😉

My point: this movie draws on a lot of what has come before and advances all of it in a story where every character has their own piece, yet, one or two small plot holes notwithstanding, it’s arguably the single most coherent plot we’ve yet had from Marvel. No small feat, that. It’s an epic of cosmic proportions, yet it’s driven by the characters, all of whom are doing their best in a most extreme situation.

Speaking of, Ragnarok is the Norse version of Armageddon, the final battle, the end of the world, the twilight of the gods. The movie lives up to the name, but in a most unexpected way. It could easily have been a dark tragedy, and from the original logo/banner art, that is what I thought it would be. Instead, while there are terrible things happening, it’s done much like they are in Guardians of the Galaxy, both the first and second movies, which acknowledges what’s happening, but makes us laugh anyway.

“We may not have taken this seriously enough…”

There wasn’t anything wrong with the humor itself, and they made use of it to undercut all the stereotypical melodramatic drama, not unlike Ant-Man, Guardians of the Galaxy, and Spider-Man: Homecoming. They made fun of the supposed dignity of larger-than-life heroes and events, and the humor, like the plot, was entirely driven by the characters. I have to wonder how many of these jokes were deliberate, and how many were bloopers that the cast just rolled with so well that they were able to leave them in. Either way, the balance of humor and tragedy is what makes the story feel organic enough that the characters are all free to be complex and develop in their own storylines.

The prime example, of course, is Thor. Thor has long been something between a dramatic character and a comic-relief character, one of the biggest guns on the Avengers but standing so high that he gets undercut by the rest of them. He was great in his first movie and Avengers, but was kind of “meh” in Dark World and Age of Ultron. Now, at last, he has the chance to shine, entirely as his own character, as a person, a leader, a man finally coming into his own power because everything which had accidentally become a crutch for him was taken away. All of this, and Chris Hemsworth makes it a hilarious ride.

Tom Hiddleston’s Loki is nothing short of fantastic, and perhaps may have finally been redeemed for once, though we’ll see how long that lasts. Mark Ruffalo’s Hulk and Bruce Banner, Tessa Thompson’s Valkyrie, and, most surprising, Karl Urban’s Skurge were all complicated characters who were given the perfect amount of space to develop. Jeff Goldblum’s Grandmaster and Cate Blanchett’s Hela weren’t entirely one-dimensional antagonists either. Hela, especially, was the darkness and rot of Asgard personified, stripping away the sunshine veneering to reveal the ugly truth beneath. The fight against her isn’t just to save something physical, it’s a war for the very soul of the kingdom.

Juggling a cast this formidable so capably is no small achievement. Still, it probably could have done with a lighter load.

“You dare offer criticism? I am the Goddess of Death!”

True to the title, Ragnarok is about the apocalyptic end of Asgard, the fall of its gods. By the end of the movie, the warriors of Asgard have mostly all been wiped out, some familiar faces among the fallen (ADD moment: now I’m glad we didn’t see her, but where was Sif during all of this?), its population reduced to a handful of ragged refugees, and the world itself turned into space rubble. Over the course of this tragedy, heroes are challenged and forced to become more than they once were, wayward villains are redeemed, rifts are bridged, legends die, and fallen champions rise again.

Also, incidentally, an insane immortal’s regime is deposed and the Hulk becomes a character instead of a device, beginning what Mark Ruffalo has stated is a three-movie arc that he himself helped to craft.

Skurge, for instance, was a brand new character, and not a bad one, and he was important in giving Cate Blanchett a chance to shine as Hela, which, really I wanted more of. Still, as well crafted and well executed as his personal arc was, it still came out of nowhere, because we’ve never seen this guy before.

Then again, there were some new faces that still held their own.

Simple guns kill Hela’s undead warriors? That’s it? If Hela draws her power from Asgard, somehow, in some way which increases her power with her proximity to it, and simple guns can kill her army… then why, again, should the universe be afraid of her?

How did Heimdall, who sees everything, not see the giant wolf and army of the dead blocking their way?

Speaking of Fenris, the giant wolf: as much as I love wolves, and animals in general, I think I’d have preferred if they just killed the beast instead of throwing it into an endless abyss.

How is Thor talking with his dead father? And did they really have to turn Odin into a poser to pull this off?

Doctor Strange’s role was very brief and was just a handy way for Thor and Loki to find Odin quickly.

I know it served the endgame of the plot but… really? Thor defeats Surtur and, knowing that the end of Asgard comes when the crown of Surtur comes into contact with the Eternal Flame, he stores the one within mere feet of the other? Why not just toss it in a black hole or something?

Was this the first time they used the music from the trailer in the movie itself? It was great in the opening fight, but somehow it just didn’t do anything for me at the climax.

Heimdall was awesome. And relegated to a backseat even more than Hela.

Marvel needs to do something about their approach to couplings. Jane and Thor may have been the most forced of them, but they’ve got to come up with something other than breaking up to explain when a female lead does not return. Though, I did like how Valkyrie kicks ass and does not pair up with anyone. She and Thor were much more equal friends than anything else.

To wrap up, there was plenty to enjoy about the movie, including the astounding cinematography and digital animation, the superb acting and comedic timing, the mighty (if somewhat simplistic) clash between godlike powers, the fleshed out characters, none of whom feel flat, the fantastic soundtrack, etc. 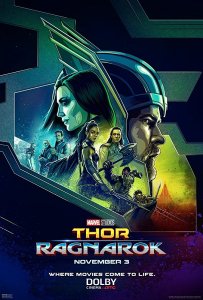 In short: Thor: Ragnarok is simply an excellent movie. Complaints notwithstanding, it is exceptionally well-crafted by quite nearly every criteria. It’s not perfect, but it is arguably Marvel’s best work yet, which is a recurring theme for their latest crop. 🙂

Everyone who has a rating for all the MCU films is putting Ragnarok pretty forward in their rankings. I’m going to wait until the end of Phase 3 to update my own countdown in that regard, but, even if it doesn’t take the top spot, it will undoubtedly be in the forward ranks. 🙂