Heh, seriously, Mickey would have definitely been my choice prior to last season. No offense intended, he’s a fair, decent guy, loyal, he takes care of his family, and he grows so much as a character during his time on the show. But there are two particular points I have against him:

1) His relationship to Rose puts him directly at odds with the Doctor, and, unlike with Rory, I could never root for him.

2) As comedy relief, he really was a bit of a ridiculous idiot at times.

Still, Mickey does develop and grow into his own man, even if it takes him some time. Also, he’s actually useful on occasion.

Bill, on the other hand, she leaves so much to be desired. 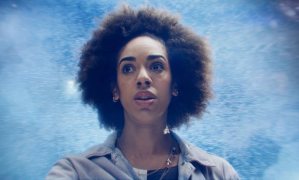 She functions less as a companion, or even a character, and more as an animated piece of meat, a convenient way to make such-and-such things happen. There’s a dangerous alien thing coming after them? She’s what it’s after. The Doctor has a vow to keep that prevents him from his usual wandering? She enables him in breaking it. The Doctor needs to be crippled somehow? It’s a result of having to save her life. The plot calls for someone to surrender the planet to alien invaders? That would be Bill Potts who does that. Something tragic must happen at the will of the Doctor’s enemy? It happens to her. Over and over again, that is her role.

I can’t recall a single time she was actually useful on her own.

She’s so slow and so dull. True, she noticed things that others usually wouldn’t, but so does everyone else the Doctor travels with, and they’re all usually much smarter, quicker, and cleverer. Even the ones who worship the Doctor a bit are at least able to function independently of him.

She was also just a little bit crazy and obsessed with her mother, who she never even knew. That just made me worry a bit about her mental health.

Basically, Bill was more of a gimmick than she was a companion, and that is why she is my least favorite.

This entry was posted in 15-Day Doctor Who Challenge, Challenge Accepted and tagged Bill Potts, Doctor Who, Mickey Smith. Bookmark the permalink.