There really are a lot of sad scenes in Doctor Who. It seems like everything fun or happy is framed by something terrible and tragic. There are countless deaths, of soldiers, of civilians, of children, of strangers, acquaintances, of friends and comrades, really, the body count is huge. The Doctor and his Companions may lark about all of time and space, but the price for their adventures is high indeed, and fatalities make up the bulk of sad scenes.

There’s Rose’s father dying for her, the rueful fate of Donna Noble, the moment when Professor Yana become the Master and Cha’tho is killed by the man who wears the face she has been devoted to, Amy’s final goodbye, Clara’s brave and tragic death, Astrid’s self-sacrifice, David Tenant’s farewell tour, anytime a human is turned into a Cyberman… the list goes on and on.

There are two scenes which have lingered with me, though.

One is from “The Waters of Mars.” As the Doctor struggles with the possibility that he could save these doomed people, but has been forbidden to, he is choosing to walk away, but forced to overhear their deaths in rapid succession. One, especially, of a woman named Steffi, has always haunted me. When faced with her imminent demise, one she can’t escape, she turns to a screen and plays a recorded video message from her family, of two beautiful children who call her “Auntie.” She dies weeping, because she’ll never see them again, and she can’t do anything about it.

I’m not sure I’ll ever forget that scene.

The other is one of those times where death might actually seem like a tempting alternative. Facing one’s own pain, or one’s own death, that is one thing. Facing the pain of someone you love, on the other hand, someone who is in pain, agony beyond description, specifically because you have failed them, that is something else altogether.

I speak of an episode in Matt Smith’s tenure, “A Good Man Goes to War.” I doubt anyone who’s seen it needs it spelled out any further.

When they lose Amy and Rory’s daughter. 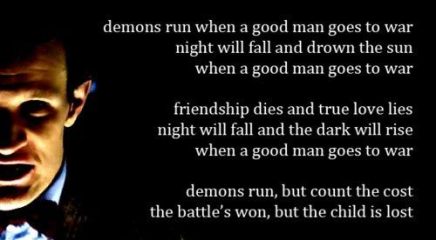 This episode was about the Doctor taking the fight to an enemy that has kidnapped his friend, Amy, while she was pregnant, and tried to take her daughter from her. The Doctor arrived, with friends, just in the nick of time, utterly defeating the enemy and saving both his friend and her daughter. But just as it seems like they have triumphed, the tables are turned. Even worse, it turns out to have been an elaborate trick.

They managed to use a duplicate of Amy to fool her husband and the Doctor before, but it was a body made of white sludge, which collapsed when the signal was cut. They just repeated the same trick with Amy’s daughter. So, right at the height of battle, with Rory and his comrades fighting to protect Amy and his little girl, the truth is revealed… as the baby turns to white sludge in Amy’s arms, and all she can do is scream.

Can you imagine a trauma like that? And in the middle of a battle? And the Doctor having to bear the guilt that he is partially responsible for it, that he failed to protect those nearest and dearest to him?

And to top it all off, they lost people in this absolute debacle, friends who had come to help the Doctor in his quest, and one young woman from the Doctor’s future, who joined the Doctor’s enemies just so she could see him again, and laid down her life among his friends… yet the Doctor she devoted her life to didn’t know her.

It was, all around, a very, very sad day.

This entry was posted in 15-Day Doctor Who Challenge, Challenge Accepted and tagged Amy Pond, Doctor Who. Bookmark the permalink.