Jessica Jones, Season 2: AKA, My Complaints 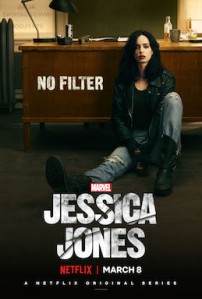 Outside some fair (I think) criticisms, I really liked the first season of Jessica Jones. I can’t really say the same for the second.

As the latest of Netflix’s Defender-themed additions to the Marvel Cinematic Universe, taking up Jessica’s story after both the first season and the events of Defenders, season two could have gone in any number of directions. The trailers were scarce on plot points, but promised something exciting, and I was especially looking forward to it with hope to see Jessica pick herself up and get to work. That would be my first disappointment: she doesn’t.

Jessica is a strong, clever, capable woman, with more good in her than she knows, but while she’s able to keep functioning after being knocked down, she seems almost incapable of truly recovering. A piece of her just stays on the ground, forever in pain, almost deliberately refusing to heal. Now, who likes seeing someone they care about languishing in a state like that?

That’s my second disappointment in this season, actually, and my biggest complaint. While the previous Defender shows have had some particular meaning to them, it felt like all this show was saying was, “Crap happens, and nobody knows how to deal with it.” Seriously, whatever was happening, everyone either collapsed or was already in pieces, and all of them tried to console themselves with some combination of drugs, alcohol, sex, violence, obsession, etc.

There’s not even a proper villain. Oh, they made it seem like there was going to be the usual nemesis to the hero, a shocking enemy, surprisingly personal, but they took things in a completely different direction. Actually, with how convoluted this season was, it’s more like a dozen completely different directions. And this stands out, to me, as an example of why we have main villains in our stories. The hero is only as great as the villain they overcome, as they say, so when there ultimately is no such villain at all, and the heroes are just beaten by life itself, what’s so great about that?

In short, at the beginning, Jessica is broken and still breaking, and by the end, almost everyone around her is broken too, or at least those that are still alive, and all to no apparent point. Oh, they develop, certainly, over the course of a long, convoluted series of largely-independent plots, but there’s no real point to the story. This leaves me wondering why we even bothered telling and listening to it. If they just had to produce something to explain what’s with the characters in the next season, fine, but could we please have a story next time, instead of just an endless series of crappy events?

I will admit that every technical aspect of the show is pretty well done. The plot really is very intricate and layered, the characters are all driven by their own inner psychology (even if they’re all being stupid and crazy about it), the cinematography, the music, the dialogue, everything, it’s all very well crafted. It’s just that all this work has apparently gone into something which, really, doesn’t seem to mean very much. It continues the running theme of the Defender shows regarding pain and healing, but in a very lackluster, tragic way.

Basically, I just didn’t much like this season. If you did, more power to you, but I just don’t see it.

4 Responses to Jessica Jones, Season 2: AKA, My Complaints