Hello, my wonderful audience! I hope you’ve all been doing well in 2018 and will continue to do so in 2019. Personally, I am doing great. 🙂

In the spirit of organizing my thoughts into something resembling a plan, I thought I’d share some ideas that I’m intending to pursue on my blog now in 2019. There’s no particular shake-ups or anything, I just want to get it all down on paper, so to speak. So, if I might beg your indulgence… 😉

Firstly, those of you who have followed me on my humble blog here for a longer time may have noticed a little drop in the production of my posts this past year. I had some new and important responsibilities to take care of in real life, and that had to come first, so, a number of my projects were set aside for awhile. However, more recent developments should give me a bit more time and flexibility to work with, so I’m hoping to do a couple of ambitious things this year.

Chief among them: from the moment I started this blog, I have been mentioning, many times, my desire to do a proper countdown of my favorite anime titles. As I’ve officially entered my fifth year writing my musings, I’d say I’ve kept you waiting for awhile! 😛 So, my plan is, right around this blog’s fifth anniversary, I am finally going to deliver! Yay!

But that’s in October, nearly a full ten months away! So why am I mentioning this right now? 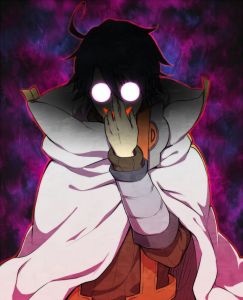 I think he’s up to something!

Well, in addition to my storytelling love of suspense, I figure I might as well make a special occasion of it, eh? 😉

Specifically, over the course of the thirty weeks leading up to my fifth blogging anniversary, I am going to take up the 30-Day Anime Pick 5 Challenge, crowned with my top twelve anime countdown.

Also, as it makes little sense for me to say, “These are my favorite anime,” without having reviewed them first, you may look forward to a weekly anime review at least until the end of October. As most, though not all, of these forty-plus reviews will be for those most forward candidates that I haven’t reviewed yet, don’t be surprised if I mostly praise these titles. 🙂 The idea is to get my feelings on paper so I can sort all these titles properly in my countdown. 😉

Now, if this sounds like my blog will be overwhelming anime-oriented for the next ten months… you are absolutely correct. 😛 If you like my anime musings, this will be a very good year for you!

But I’m not about to forget everything else, you know!

Goal: have this feeling at the end of the year.

Obviously, there will still be my quotes every Sunday and my weekly TV commentary on Saturday, so long as something in my lineup is airing. On that note, I am shopping for potential additions to said lineup, so if you have a suggestion, like something new, I am open to it. 🙂

The quantity of book reviews I’ve been publishing has certainly taken a hit and really suffered this last year, which is ironic considering how fast I’ve been chewing through them. I hope to share more thoughts on that, and perhaps more on entire series than individual titles.

My extended experimental project, which has lasted for several years now, has finally concluded for the time being, as I finally reached the end of the great queue of experimental titles I had on hand. Now, I get to follow up the more promising ones by investigating the series which follow them. I am looking forward to that! 🙂

So, that covers, anime, books and TV, but as for movies…

Well, there are some I intend to watch and review only when they come out for viewing at home, but between work, responsibilities, and budgeting, I can only afford to pursue a handful of titles in theaters. I think it was two years ago I announced about a dozen titles I’d intended to see that year (2017). I saw about nine of them in theaters, which wasn’t too bad, but I’m going to have scale back even more from now on.

So, for this year’s handful of trips to the theater, we have only the heavy hitters, which I will try (there are no guarantees) to hit on their opening weekends:

I feel almost like someone announcing a long lineup…

Captain Marvel – Mar. 8 (I am excited for this one!)
Shazam – Apr. 5 (I am interested in this one, especially after Aquaman, which review is pending)
Avengers: Endgame – Apr. 26 (I am not missing this one!)
Godzilla: King of Monsters – May 31 (I am hopeful about this one)
Dark Phoenix – June 7 (barring any further delays by the Disney-Fox deal)
Spider-Man: Far From Home – July 5 (it will have some large shoes to fill!)

It’s a very busy first half the year. 😉

Frozen 2 and Star Wars IX come much later in the year, within easy striking distance of an extended family outing during the holidays, just not on opening weekend.

That’s about it for now, I suppose. On that note, once again:

This entry was posted in Miscellaneous, What's New. Bookmark the permalink.