The Rise of Aquaman 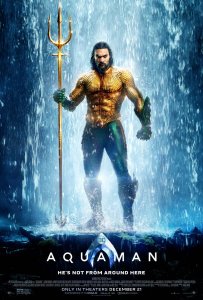 Well, that was a fun ride!

And that is my first official comment on Aquaman. Freed from the burden of Snyder’s relentless, joy-sucking need for everything to be DARK and EPIC, the DCEU is getting to be a lot more fun these days, and I like it! 🙂

As the latest adddition to DC’s Extended Universe, Aquaman actually doesn’t have much to compete with, really. Man of Steel had issues, but it wasn’t terrible, unlike Batman v Superman: Dawn of Justice. Wonder Woman was fantastic, but stands out as their best yet, easily beating out both Suicide Squad and Justice League. In that light, it might not say much, really, but, for what it’s worth, Aquaman is one of DC’s better movies, I would say.

Aquaman, aka Arthur Curry, is the king of Atlantis in the universe of DC Comics, and his movie tells the story of how he came to be said king. Portrayed by Jason Momoa (of Stargate: Atlantis and Game of Thrones fame), Arthur is a unique character caught in between worlds. He is of royal blood but humble birth, a strong man who is constantly out of his element even when he’s in it. The product of a forbidden love, he has no interest in the affairs of the world, especially wanting nothing to do with Atlantis, yet he feels compelled to help when he comes across trouble. He is an unrefined brute, more at home carousing with fellow ruffians than he is in a grand hall or arena, yet courteous and aware of those around him. He is, in short, a fleshed-out character, and wildly entertaining.

They did good casting Momoa as Aquaman. 🙂

Starring opposite Momoa are Amber Heard as Mera, a princess and the obvious romantic interest, and Patrick Wilson as Orm, Arthur’s half-brother, ruler of Atlantis who intends to conquer the seas and then use that consolidated military might to wipe out the humans on land. These three truly carry the film, with phenomenal support from such actors as Nicole Kidman, Dolph Lundgren, and even Julie Andrews (voicing a terrifying monster). Willem Dafoe comes off as a bit wooden, but that might simply be the stoicism of his character. Either way, it was critical to cast the central three characters as perfectly as possible, and they hit it out of the park all three times. Momoa, Heard, and Wilson bring a believable depth to three characters who are a bit more complex than they look. 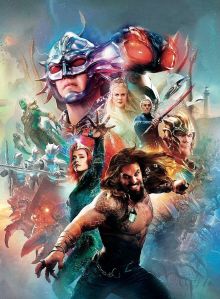 For basically just going from Point A to Point B, there’s a lot that goes on in this movie.

As for the story, Arthur and Mera are obviously trying to stop Orm from taking over and killing billions of innocent people, and this happens to involve a quest for an ancient, mystical trident. In some ways, it’s a simple series of events with goals and obstacles, but it serves more as a vehicle for the characters’ personal journeys than anything else. For Arthur, he learns to consider his choices more carefully, to become more responsible and proactive in safeguarding the world, to embrace a part of his heritage that he’s thus far ignored, and to be more than just a thug. For Mera, she learns to see more in the surface world, and in Arthur, than she was first willing to admit there was. And for Orm, he moves forward with his agenda, driven by the demons of his past, and, skating around spoilers, he only accepts his eventual defeat when he is given relief from those demons. In that way, he is one of the more intriguing villains I’ve seen for awhile.

That’s all pretty high praise, of course. I want to make it clear that there are still points where things could be improved. Some things were predictable, and the movie occasionally felt more like a tour through all things Atlantean, but, on the other hand, it is a heroic epic and it fleshes out this unseen world more thoroughly. Mind you, with so much of an entirely new world to involve, a few things fall by the wayside, and we don’t get to know the more intriguing minor characters at all.

There were also some campy moments, like Mera’s soulful eyes to show her distress during the initial duel between brothers, but, again, she soon take on a much more active part of the story as a strong female hero, really.

The movie may not have needed to be a full two and a half hours long, as well. It would just take a bit of editing to shorten it down to something more manageable, especially given how much of it is exposition, but, again, they did keep me entertained for almost the entire time.

Really, the most ridiculous part was the loooong kiss scene right when the entire aquatic world is at war all around them. I understand the interest, but there’s a time and a place for that, ya know? The middle of a war, where every second is measured in how many people are dying and these two love birds under the sea, who have the key to ending the slaughter, are going with “Kiss the Girl” instead of “hurry and save the day.”

That’s one example of where they could have edited scenes to make them a bit shorter, by shaving off bits and pieces here and there.

And while I enjoyed Black Manta as a secondary villain, especially with the lesson he provides to Arthur, his motivation felt paper thin. 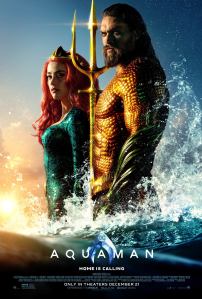 All that said, Aquaman remains, in my book, a fun, action-filled adventure, and one which will be most welcome in my collection. It has a good “good guy,” a good “bad guy,” and a pretty girl (who is more than just a pretty face), which, as my father once remarked right after we saw Spider-Man, makes for a good movie! It’s not flawless, of course, but fun!

9 Responses to The Rise of Aquaman