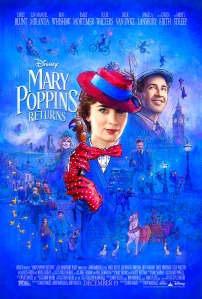 Mary Poppins Returns is best enjoyed, I think, right on the heels of Mary Poppins, the better for the magic of the latter to make up for the flaws of the former, and for the sequel to enhance the importance of the events in the original. At least, that’s my experience with it.

I was not going to see this one in theaters. I mean, it seemed like it would be perfectly nice, as movies go, but the trailers left me vastly underwhelmed. Still, my mother had her heart set on it, and, being my mother, held Aquaman over my head to extort me into going with the rest of the family. And she wonders where I get my ruthless cunning. 😉

Either way, I went, and now I can confidently credit both the positive and negative things I’d heard about it. On the one hand, it is a rekindling of childhood wonder, and it offers some light to the world, which I always appreciate. On the other… oh, boy, where to begin.

It must be said, straight up, that there is no escaping a compare/contrast between the two film, so I am not even going to try.

Mary Poppins tells an enchanting, musical tale, albeit in a roundabout way with what amounts to a series of shorts sewn together, of a man named George Banks, as he learns about the things he’s missing in life, like joy, cheer, and the childhood of his children.

Mary Poppins Returns tells a more cohesive story, albeit with some digressions, of George Banks’ children, Jane and especially Michael, when they’ve grown to adulthood and lost that sense of wonder they once knew. Michael has become a widower with three children to raise, and an old family home about to be repossessed by the bank unless he can conjure up the means to repay an entire loan within a week. The combination of circumstances has sucked much of the joy out of Michael Banks and his family. Thus, here comes Mary Poppins herself, returned to help them at a time of financial crisis by bringing some joy and imagination back into their lives, and, with it, some solace as well.

It’s not the worst of ideas. Though it seems entirely impractical, it proves oddly, and indirectly, effective. The children learn to dream of impossible things and pursue them with determination, and, through them, so do the adults. It’s not much, but it makes the difference at a pivotal moment.

Mary Poppins, it would seem, is a conniving genius with godlike serendipity on her side.

Speaking of, while Emily Blunt could never properly duplicate Julie Andrews’ rendition of the titular magical nanny, her version of Mary Poppins is more parental and clear in her emotions, at least for the audience. It’s not much, really, just a look, an expression, an intonation of words, but she’s not nearly so stoic and seemingly unfeeling. There’s no question, really, that she truly cares for the Banks family. She just doesn’t crow about it. 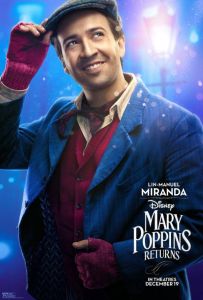 Then we have Jack, this movie’s version of Bert, a humble lamplighter in London. As he helps the Banks alongside Mary Poppins, and stands as a romantic interest for Jane, it feels incredibly poetic for him to be a humble keeper of the light, responsible for brightening the darkness. There’s no wondering why Lin-Manuel Miranda was cast as Jack, as he’s fit, particularly handsome, and can carry a tune. Also, he does his own thing instead of attempting to compete with the legendary Dick Van Dyke, but, even then, feels a bit like a cardboard cutout.

As for the rest of the cast, Michael was relatable as a man struggling to do right by his family in the wake of a great loss, but Jane was mostly just there, and this despite being both Michael’s sister and Jack’s romantic interest. The new generation of Banks children were adorable but a bit wooden, so much that I barely remember their names… not to mention jarring in how grown-up the older two behaved in comparison to their slightly-younger brother. As for the villains, we had a head banker with two particular subordinates, one nasty and the other nice, who was just set on foreclosure and repossession, to the exclusion of other options completely.

My favorite moment of the film was easily Dick Van Dyke’s minor role towards the end of the film. His was probably the best performance of the entire movie, quickly endearing and effective. Through him, the two movies and the magic of both are bound together, especially as an unremarked legacy of the first movie proves to be the salvation of the Banks family in the second.

What was easily the least enjoyable part of the movie was actually the music. Where the first Poppins movie may have had an arguable overabundance of songs, the sequel definitely does. Where the songs of the first movie were charming, catchy, and easily understood, the sequel’s soundtrack is dominated by songs which are anything but. I would not have believed that a single movie could have so many mediocre, annoying, unending songs that muddle together so perfectly and defy lyrical comprehension entirely. Seriously, most any song in Mary Poppins is annoying difficult to forget, but in Mary Poppins Returns, they’re annoying difficult to keep up with, and, for that matter – hang on, did they actually just have Mary Poppins herself sing about a naked woman in a children’s movie?! – just plain annoying.

I recall a scene from a science fiction television show where a chatty complainer keeps interrupting an alien while he’s working and the alien finally just looks straight at him and says, “Stop. Talking. Please. Thank you.”

I felt a bit like that. “Stop. Singing. Please.”

And what was with Mary Poppins standing back at the climax and letting dozens of men risk their lives climbing a tower only to float up and finish the job at the last moment? And always taking her eyes off the Banks children and letting them get into trouble? And… you know what? I’ll just stop there. 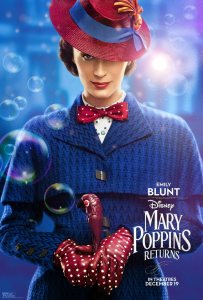 Overall, Mary Poppins Returns is a “good” film, but not really “great.” It tries to do good things, of course, and there’s just a little bit of magic there to be found, in smaller, quieter ways than one needs endless dancing and singing for. It tells a story, a generally good one, but doesn’t quite stand alone on its own two feet. It may have too many moving parts, too many minor characters fluffing things up, but it still strives towards something simpler and more enchanting (and just trips a lot on the way).

2 Responses to Mary Poppins Returns… and…?