Ralph Wrecks the Internet, but Not the Movie

I was asked what movie I had enjoyed most in 2018. I thought for a moment, and the answer came clear. I hadn’t seen Aquaman yet; I had seen little besides the MCU movies, really, and those compete with each other so well that I had to disqualify the lot of them; that left only two candidates, both sequels: Mary Poppins Returns and Ralph Breaks the Internet.

Guess which one I chose. 😉

(really, that title should be Ralph Wrecks the Internet, but whatever)

Wreck-It Ralph is officially my favorite animated Disney movie, ever, and now I’d say it’s my favorite series. The first movie is about a how Ralph comes to accept himself and improve his lot in life, including the beginning of his friendship with Vanellope, who has a similar journey of self-acceptance. It’s a beautiful thing, but there was one small detail: at the end of the movie, just a bit of Ralph’s sense of self-worth seemed to be tied to Vanellope. It’s not entirely a bad thing, but left alone it could grow and become something unhealthy, and, it turns out, it did exactly that.

Ralph Breaks the Internet is about both Ralph and Vanellope, how they grow as individuals and as friends to become more independent of each other. It’s a very human, organic story of a stage that all close relationships, including friendships, siblings, romantic couples, and especially parents and children have to pass through. Eventually, if it’s healthy, a certain amount of independence must emerge after a preceding stage of dependence or codependency has been built. This metamorphosis is scary, and often painful, but ultimately fulfilling and joyful.

That’s the sort of story this movie tells, and it’s driven in believable ways by relatable, lovable characters.

For an actual plot synopsis: after a kindly deed backfires terribly, putting Vanellope’s entire game at risk, Ralph is determined to fix things and takes to the newly-installed internet to get what they need. But complications arise as the duo learn to navigate this unfamiliar world. Soon the two friends find themselves pulled slowly but insistently in differing directions. As their friendship is strained, Ralph’s insecurities come to a boiling point and boil over, spilling into the virtual world around them.

Along the way, Ralph and Vanellope meet a colorful cast of helpful characters, including a racer woman named Shank (voiced by Gal Gadot and absolutely awesome), a spamming program, an advertiser, and, of course, we saw them in the trailers, the Disney princesses. Which, that was great. 🙂

So, we have lovable characters, an interesting story, compelling themes, legitimate tension… oh, and the humor is great! I laughed so much during this movie, it was so witty and intelligent! 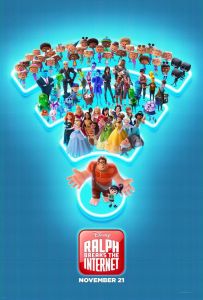 Ironically, I don’t have much else to say outside the praise I’ve already given. It checks off all of the most important boxes and a number of others, full marks right across the board. The only criticism I might have is how I can’t seem to remember the soundtrack at all, but, then again, I’ve had music from both Mary Poppins movies running around my head for the last week, so, take that with a grain of salt. I can say that Ralph‘s soundtrack certainly made me feel whatever I was supposed to be feeling at any given moment, so, job done. 😉

Basically, Ralph Breaks the Internet is already one of my favorite movies. 🙂

This entry was posted in Movies, Tuesday Review and tagged Disney, Wreck-It Ralph. Bookmark the permalink.

4 Responses to Ralph Wrecks the Internet, but Not the Movie