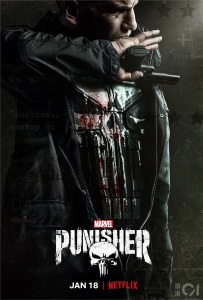 It’s all over but the crying.

Netflix’s little Defenders-themed corner of the Marvel Cinematic Universe may be coming to a close, but dang if it ain’t putting on its best face before doing so!

In the last year and a couple months, the Marvel-Netflix partnership has produced the first season of The Punisher, second seasons for Jessica Jones, Iron Fist, and Luke Cage, and a third season for Daredevil. Whatever’s going on behind the scenes, continuations are being scrapped left, right, and center, and I personally doubt things will continue beyond the third season of Jessica Jones. Which is a shame, because they’ve generally been knocking it out of the park these days. I suppose one might hope for continuations on Disney’s soon-to-be streaming service, but, for now, we must take what satisfaction we can get with what we got.

And Punisher delivered brilliantly in its second season. Indeed, I think it’s become my favorite to date, with only Daredevil’s first season to compete with it.

Much of what I said about the first season still holds true, but there are a few subtle differences.

While the violence remains realistic and brutal, it’s tweaked slightly to be less extreme. Honestly, the first season had bits that could scarcely escape being compared to torture-porn, but the second is more grounded and less jarring in that way.

While there is definitely sexual content, that, too, has been diminished slightly, so it’s a bit more balanced and less uncomfortable. Not to say they couldn’t tone it down more, but I can’t recall any gratuitous nudity, like they had so much of in the first season.

It’s still not child-friendly, but it’s less inappropriate in a number of ways. At no point in the show was I crying for the end, for relief. Quite the contrary. (which also indicates the superb pacing of the show)

Basically, they improved what they did well in the first season and addressed some shortcomings to make an overall better, more enjoyable experience.

Yes, I just said, in so many words: the second season is better than the first. In my opinion. 😉

The story follows the titular Punisher (Frank Castle) and his allies as they fight not one but two small wars. One is with the return of last season’s final boss, who is developed in surprising and compelling ways. The other is with a new faction, a murderous, power-hungry couple that shrouds themselves in righteous words, practicing a form of Christianity while defiling the very foundations of such. They mostly take a back seat, however, to the Pilgrim, the man they send to do their dirty work for them.

It is the differences and the similarities between Castle and his enemies which makes the show so compelling. Castle and Russo, for instance, are cut from the same cloth in a number of ways, and merely diverged at some point because one of them puts on airs of caring while the other actually cares. When it comes to the Punisher and the Pilgrim, however, that is where the story, running alongside Russo’s, gains its greatest depth in a long, extended discussion about sacrifice, salvation, and the ideologies which demand the one while promising the other.

Even more, the spotlight is shared effectively amongst these main combatants and the people around them. The supporting characters felt every bit as rounded and developed as the rest, and even minor characters were believably human. On which note, I am now a personal fan of Brett Mahoney, who has been a constant across most of this corner of the MCU and has grown from simply filling a role to actually being a unique and developed hero in his own right, and he is in good company.

You’d never think she’d be his most effective partner yet, but…

And I want to give a particular shout out to Giorgia Whigham, who was perfect in her portrayal of Amy Bendix, in my humble opinion. This is the first time I’ve ever seen this actress, but I am almost glad that Punisher is probably over, because once her character departs from the show, it would have been much the lesser for continuing without her. She becomes to Punisher what Kaylee was to Firefly: the dear, beating heart of the central cast. And considering the company she’s keeping, that’s a phenomenal accomplishment. 🙂

Add to this the brilliant acting, the direction, the cinematography, a perfect soundtrack… basically, this is a masterful work, arguably the seminal accomplishment of everyone involved in making it.

Intricate plot, fascinating characters, compelling themes, all carried forward with astounding technical expertise. That is The Punisher in a nutshell.

Rating: 9 stars out of 10. (subtracting the one point simply for the mature content)