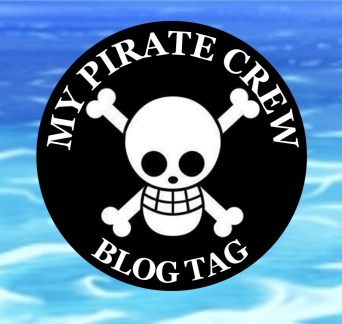 Arrr, avast! It be time for taking to the high seas! Oceans of adventure await us, as do, hopefully, very large piles of treasure! Weigh anchor, let go the lines, and set the sails! Off we go, yohohohooooo!

Only one small detail remains… who do we sail with, mateys? What crew will it be, that can earn their salt and stand steady before the mast? Who shall it be, who shall we choose? Now, of course, all be welcome with us buccaneers, but for those functions that are most important, most pivotal to our survival, selection must be made most carefully indeed!

My thanks to Karandi of 100 Word Anime for the tag! I’m enjoying this, and I consider it fairly cool that I’m getting tagged so early as this tag makes the rounds. Very good for my ego! 🙂

Also good for my ego, Winter tagged me too! Yay! Thanks! 😀

Setting said ego aside, for a the moment, and with no more ado, let’s  get to it!

So, not only are we picking our ideal crew, but we’re also selecting which roles to fill. Makes it more interesting, no? 😉

Well, first thing’s first, this crew won’t make it very far at all on an empty stomach. People survive without money all the time, but no one survives without food. Thus, as food is important, the first role I fill is the cook. Er, I mean, chef.

Chef: The Master
Restaurant to Another World 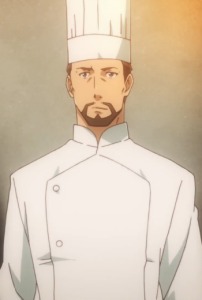 I actually don’t know many chefs in anime, but of those that I do, the Master of Western Restaurant Nekoya is easily among the best. We don’t even know his name, but we know he is an excellent cook! He is skilled and enjoys making diverse dishes for a very eclectic crowd, giving each of them exactly what they want and need, typically with whatever he has on hand. He’s both disciplined and kind as well, which is a huge plus.

Who better to cook for my wonderful crew, eh?

And now that our stomachs are taken care of, let’s see to the other matters of our self-preservation, starting with healing the hurts which we will undoubtedly collect along the way. 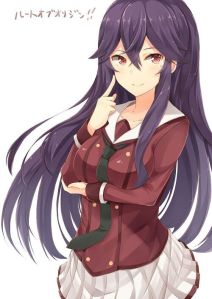 There were a couple of other notable candidates for this position, such as Megumi fro Rurouni Kenshin and Eve from Needless. However, Eve is limited by how many calories she’s had recently, which is not always a guarantee at sea, and Megumi, while capable, is not superhuman… which is something I like in my healers, ya know?

That’s when it struck me  that Sayumi is  one of the best healers around. With a touch, she can restore most anything to its previous state. Cuts and bruises? No problem. Severed limbs, even? Restored. Destroyed clothing? Back in mint condition. Heck, she can even restore groups of people, so if one of us goes missing or gets captured, they can be brought back safely and easily.

Besides her healing abilities, she’s also fairly calm and level-headed. Which, when you see the rest of the crew, you will agree is an important asset!

And now that we’re not going to die in the short term, let’s make sure we don’t die in the long term, eh? To that end, we need to add some brains, brawn, and guts to this legendary crew! Let’s start with knowing where we’re going and how to get there, so we’re not trapped eternally at sea. To wit, we need a navigator. And I choose the very best!

I almost feel like I’m cheating with this one. I mean, this entire tag is obviously inspired by One Piece, and it’s not like there’s any rule against it, but, even so… in all of the assembled crews I’ve thus far seen resulting from this tag, I’ve not seen one character from the show among them. So, I’m the first. (that I know of)

…but, really, I don’t know that many navigators in anime, and even if I did, no one can compare to Nami, the greatest of them all!

She’s capable, experienced, educated, and passionate, with instincts so sharp she can detect what is happening in the seas better than any scientific instrument. She has the fiery temper and iron will needed to get any crew hopping to whatever she knows needs doing. She’s very good company as well.

…and she’s my anime crush, so I’d be an idiot not to take the opportunity! 😉

With our stomachs full, our bodies healthy, and our course set, it follows that we need to keep our ship in good shape as well. As the lesson of the Going Merry testifies, the seas, the enemies, and even the crew itself can be very rough on a boat, so we need a mechanic to keep it all in good working order. 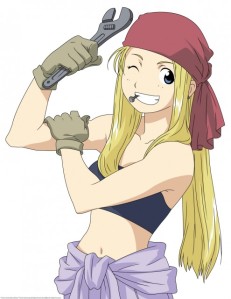 I’m going to be honest, this was a very close competition. Winry is clearly an obvious choice, but I didn’t want copycat anyone, so I looked around for some options. I almost went with Bulma from the Dragonball franchise, as she, too, is highly capable with machinery. I mean, she’s practically a mad scientist, complete with her own time machine, how much better can you get? But, as I thought about it… Bulma deals with very advanced technology, and she has always had plenty of resources to spare. Winry, on the other hand… well…

Winry is much more grounded in actual mechanics than mad science. She has much more limited resources, yet does marvelous things. We actually see her at work, putting in the grease and sweat. And she handles hardware that is intricate, yet practical and strong, exactly what we want when dealing with our ship’s engine and structure.

She is amazing, and I can’t think of a better mechanic than her anywhere in anime. I invite you to try! 😉

We’re shaping up pretty good now. Delicious food in bellies, hurts mended, course laid, and ship all shipshape. Now, we’ll be needing a bit of muscle, both for everyday tasks and for the inevitable fighting. On which note: 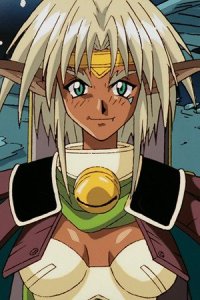 RAWR! Make way before this proud were-tiger warrior of the mighty Ctarl-Ctarl race! Strength, speed, endurance, resilience! Her physical power dwarfs that of most mere mortal humans! She can lift a ton, take a relaxing hot bath in lava, and outfight the deadliest assassins from across the stars, including one that turns into a freaking tornado! Brave, loyal, and fierce, Aisha will absolutely annihilate our enemies!

And that’s besides helping out around the ship. 😉

She might tax the Master’s kitchen a little, but she’s worth it! 🙂

Next, let’s have a some brain to partner up with this brawn, shall we? 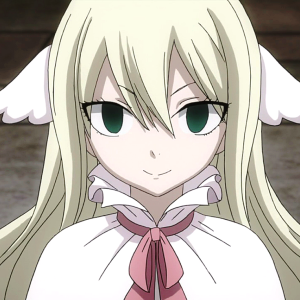 There were a number of qualified candidates here, including, but not limited to, Shikimaru of Naruto, Shiroe of Log Horizon, and Lelouch of Code Geass. However, the Fairy Tactician, I think, shines a bit brighter than the rest.

Mavis is clever, wily, and possesses a wide breadth of knowledge. Indeed, her mental capacities are nothing short of phenomenal. When her guild was in the Magic Games, she directed them successfully, having envisioned a couple million possible scenarios to adapt to, if I recall correctly. She understands both human psychology and battle strategy, and for all her calculations, she’s still flexible in the application, never becoming too rigid. All of this, and her formidable magical prowess, and a magnificent will power which she passed on to her entire guild, makes her a force to be reckoned with.

Pair her with Aisha and the rest, and I’m pretty certain this crew will steamroll over any obstacle and opposition.

Chef, Doctor, Navigator, Mechanic, and now Warrior and Strategist… that’s six out of seven roles. We’re down to the nitty-gritty now, aren’t we? So, out of Sniper, Scientist, and Entertainer, which one should our crew pick? Well, I imagine we won’t be short of entertainment with this crew, and I’m a fair hand at storytelling myself, so we shouldn’t have too much trouble with boredom. That leaves either a Sniper or a Scientist, both very useful. If I have to choose between the two, however, I remember that knowledge is power. With all the weird and dangerous things we’re going to encounter, I’d rather have someone who knows what we’re dealing with and how, rather than someone whose best skill is shooting whatever we’re dealing with at long range. 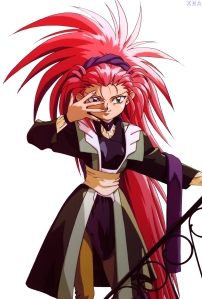 The mad scientist to end all mad science! Mwahahahah! Er, I mean, yohohohooooo!

Who better to deal with the incoming weirdness than Washu? She’s a mad, adorable, little ball of fun and mischief! We will never be bored, and nothing we encounter will stand a chance! Especially not when teamed up with Mavis, Aisha, and Winry! Heh, just imagine if I’d put Washu and Bulma on the same ship together! Heh, we’d have ourselves a flying ship in no time! 🙂

Of course, we will definitely be making sure that everything she makes has an off switch. 😉

Ok, would you believe that I didn’t notice that it’s mostly girls until after I’d put the crew together? 😉 Girl power!

And that’s my crew!

Now, what about you? Who would you scout for your crews, hmm? I’m asking in general, of course, but I’m especially looking at you, my rival captains, who I tag, namely:

I look forward to seeing what crews you put together! 😀