Somewhat continuing this month’s Valentine-inspired theme of love stories, we have a slice of life dramatic comedy which follows a group of civil servants in their day-to-day lives, as well as the developing relationships among them.

Servant x Service is one of those anime that surprises you with how much fun it is. I mean, it sounds like it should be fairly dull, really. Just following the employees of some public town office? That ought to be boring! But it’s not. It’s hilarious.

The setup is used fairly often these days: use a public work space, often in a service industry, add characters, give them a dash of quirks and issues, and see what happens. The characters and their relationships, both friendships and couplings, will develop in slow, small ways as they go about life in a setting that, for being so normal, turns into a surprising box of crazy as long as these people are in it.

Naturally,  with the setting fairly normal and the plot fairly slow, the most critical element is the characters. We need to like them, feel for them, understand them, and maybe even see a bit of ourselves in them.

Leading the cast, more or less, is Lucy Yamagami. She’s disciplined, capable, hard-working, an avid bookworm, and mostly grounded and reasonable. (and she is… generously endowed, we shall say) The one issue she always loses her head over is her name. When she was born, her parents asked for suggestions, got a number of them, and used all of them. So she has about a millions middle names, which she was always teased about and has become quite sensitive over it. Her parents were generally good, though, so she restricts herself from lashing out at them, and she refuses to simply change her name for their sake. Instead, she wants to find the civil servant who simply approved her name without questioning her parents about it and complain. This is why she became a civil servant in the first place: to take revenge on someone.

Next to Lucy comes Yutaka Hasebe. He is a genius, learning and mastering things with relative ease, but always taking it easy. He doesn’t take most things seriously and seems more devoted to slacking off than anything else. Still, he gets his work done, he helps others, and he has a multitude of surprising depths and skills. In many ways, he and Lucy are perfect for each other, complementing and completing each other to find balance.

Yes, Lucy and Hasebe are the main couple of the show, and they are adorable both as a couple and as individuals. As for the rest of the central cast:

Saya Miyoshi, a friend and coworker, is calm and patient, spending an inordinate amount of time listening to a little old lady who eventually arranges for her to meet her grandson. The man, Joji Tanaka, is generally professional in his behavior and very responsible… a little too much so, as he is still obsessed, a good decade or so later, after a minor offense he gave to Hasebe and still wants to make right in ludicrous proportion. That’s when we see Miyoshi shine, because while she is long-suffering, when she puts her foot down, she is immovable and unyielding. It’s a good combination for tempering Tanaka’s more extreme flaws without simply demolishing him outright.

Megumi Chihaya is quiet and intelligent, a long-running temp who loves to make clothes and cosplay. She clearly wears the pants in her “secret” relationship with Taishi Ichiya, a largely-spineless supervisor who is more concerned with imperious little sister Toko than anything else. Toko, in turn, has a fascination with public service laws which is more about being around her brother than most anything else, and who remains devoutly clueless of her brother’s relationship with Chihaya. It’s an unorthodox three-way relationship, to be sure, but one which has been working thus far, albeit in a strange way. To be sure, dealing with the siblings and their issues takes a quiet, enduring attitude, combined with a firm insistence that things move forward at some point.

Finally, the district manager of the entire office is so shy that he comes into work as a remote-controlled stuffed bunny, so we never actually see him, though we do meet his daughter, one of Toko’s friends from school.

So, that’s three couples and a few extras. You see why I’m reviewing this in February. 😉

Out of these three couples, I love all three mostly because of how good for each other they all are. I also like how real they felt, having disagreements and misunderstandings which could be believed and which add… not necessarily tension, because the show does not do tension, but flavor. Flavor is good. 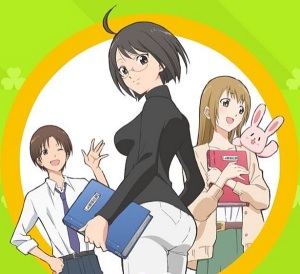 And… that really sums up the anime as a whole, already. Thirteen episodes, and not much at all happens in them, really. Yet it’s fun and entertaining, though generally in a very low-key way. It doesn’t tell much of a story beyond how these characters began, but it leaves off in such a way that feels fulfilling. The couplings may all come about in an unusual manner, but they’re oddly satisfying and feel right by the end, leaving off on a hopeful note that everyone can be happy, though that won’t always be easy.

Servant x Service may seem a bit slow in its pace, but it’s amusing and doesn’t overdo the drama. It has enjoyable relationships and believable, healthy couplings. I like it, quite well. 🙂

This entry was posted in Anime and Cartoons, Tuesday Review and tagged Servant x Service. Bookmark the permalink.