Place to Place: Adorable and Fun

It’s amazing how used to something you can get. When this anime first came out, I knew it under the name of Acchi Kocchi. Apparently, it has since been officially translated in English as Place to Place. I prefer Acchi Kocchi, but whatever. 😉

Looking for a slice of life comedy with much cuteness, zero advancement of plot and/or relationships, and a whole lot of laughter?  We’ve got you covered!

Place to Place follows the hilarious, and slightly exaggerated, adventures of a group of high school friends. Each episode, divided in half, tells two new stories featuring our central cast as they go to school, go out, go camping, play games, etc. With the various twists, jokes, and zany antics, it’s a pretty fun ride, full of laughs.

For our main characters,  we have: Io, a most handsome young man, calm and composed, generally intelligent but clueless about his own heart-throbbing influence; Tsumiki, a cute girl who was probably a cat in a past life, is much stronger than she looks, and is hopelessly in love with the clueless Io; Hime, a sweet, angelic girl with the pure, innocent heart of a princess, so of course she’s airheaded and clumsy; Mayoi, the enthusiastic mad scientist girl who loves chaos and is absolutely my inner imp let loose; Sakaki, a young man who is a kindred spirit to Mayoi.

There are several recurring characters who make their own contributions to the show’s hilarity, but it mostly follows these five.

And… that’s really most everything that can be said about it. It doesn’t advance any overall plot, and the relationships remain in the end exactly as they are in the beginning. It’s just a number of half-episode stories featuring the hilarious escapades of adorable characters. Somehow, it just works. I love it. 🙂 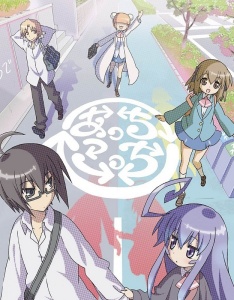 Oh, and I love that snowball fight! 😀

So, in what is probably the single shortest review I’ve ever written, I recommend Place to Place if you just want to have a fun time and laugh for a few hours.

This entry was posted in Anime and Cartoons, Tuesday Review and tagged Place to Place. Bookmark the permalink.

4 Responses to Place to Place: Adorable and Fun