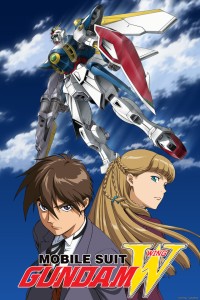 You want to talk nostalgia? This was one of the first anime (especially with mecha) I ever watched, and my introduction to the Gundam franchise. It stands as my favorite Gundam series, and, though I know favoritism will always be subjective, I like to think that there is more to my preference than the lingering affection of childhood memories. This really is the true peak of all things Gundam, I say.

Mobile Suit Gundam Wing tells an epic tale of war and humanity’s quest for peace. It follows five young men, the pilots of highly-advanced and powerful mobile suits, and the people around them. There are so many factions vying for power with the tools of intrigue, battle, and bloodshed at their disposal that the plot continually takes surprising, yet believable, turns, blurring the lines between heroes and villains as everyone strives towards their own goals. It’s an intricate dance of action, suspense, revenge, honor, intrigue, love, despair, and hope.

Compared to other Gundam shows I’ve seen, it’s not as complicated and convoluted as Gundam OO, not as gaudy as G Gundam, not as childish as SD Gundam, not as preachy as 8th MS Team, not as high-handed as Gundam Seed, and not as tragic as Iron-Blooded Orphans. Mind you, I can’t say it’s “perfect,” but it’s closest to such which I’ve seen in the franchise.

The show is comprehensive enough that it has a number of strengths and weaknesses, too many to really discuss in proper depth without turning this into a short novel. The music is beautiful, the themes are powerful, the characters are lovable, the battles are thrilling, etc. On the other hand, some arcs (like Quatre going crazy), characters (Dorothy Catalonia, anyone?), and even couplings (I am looking at Heero and Relena when I say this) strain credulity a bit.

Yes, you can have people flying giant robots in space, and what I’ll hesitate to believe is all about the characters. 😉

For the most part, though, said characters are fleshed-out and unique, each charming in their own way. Again, I cannot truly do them justice in a single sentence, but that is part of the show’s triumph. Heroes and villains, as I said, are all but interchangeable. They’re not just good or evil, they’re people, and therefore complicated. As an example, it takes most of the show’s runtime for the five Gundam pilots to come together as a team, instead of starting out that way, and for their nemeses to be established in time for the climax.

It deals with some fairly complex subjects, though they sometimes do that with the grace of a floating feather, and sometimes with all subtlety of a chainsaw. For awhile after watching this show, I thought I favored pacifism, because while it always spouted how great peace and nonviolence are, it also depicted these “pacifists” as people willing to fight for their lives and their loved ones. You see the disconnect, here? It talked about pacifism, but didn’t really show it as it really is. Things like that, where it touched on important subjects with varying degrees of accuracy and weight, make it a bit ham-fisted, but also excellent discussion fodder. 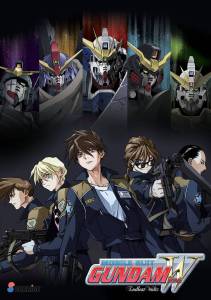 Perhaps that is why it’s my favorite installment of the franchise, because of the balance it strikes. It neither simplifies nor overcomplicates things, be it characters, themes, plots, battles, etc. It feels weighty, in its way, but not overly prolonged. It’s endearing and poignant, but not too much, if that makes sense.

And you gotta love some of these couples! My personal favorite would be Hildy and Duo. 🙂

In short, Gundam Wing is an exciting, thrilling, thoughtful work, excellently crafted and brilliantly designed, and an all around well-told story.

This entry was posted in Anime and Cartoons, Tuesday Review and tagged Gundam Wing. Bookmark the permalink.