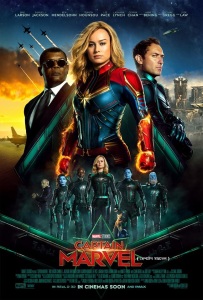 I had a ticket, I swear, I had a ticket to see this movie on opening weekend, a month ago. Unfortunately, I fell under the weather at a worst possible moment, and I did not want to drag everyone in the theater down with me. So, I was patient and avoided spoilers like the plague. But now my patience has paid off! Finally, I got to see it, and now I can review it! 🙂

In that interest, let me get one thing out of the way first.

I neither care for nor about the politics of either Brie Larson or of anyone who hated on the film before seeing it. I care about the movie, so if you want a discussion about the politics and whatnot on either side, I am afraid you will have to find it elsewhere. I chose to just sit back and relax and enjoy the movie, and I hope you may find yourself able to do the same with this, my little review, on my humble blog.

This is the origin of Carol Danvers, who becomes the titular hero and one of the most powerful figures in both the Marvel Cinematic Universe as well as the comics on which such is based. Thing is, it’s one of the longer, more convoluted origins, and, I am borrowing someone else’s words here, it does not start with the hero being an overgrown man-child. As such, it makes sense for them to begin telling Carol’s story technically in the middle, at a point when her own past has been taken from her. As events unfold, that past comes to light, ready for her to reclaim it, and when she does, she doesn’t just magically mature like other heroes have. She was already mature, because she’s been continually knocked down and gotten back up again. This movie just tells the story of how she does it again, in a much more grand and flashy way. As such, she finds that, where she has been fighting to prove herself all this time, now she learns that she really doesn’t have to prove anything to anyone.

That’s a bit more intricate than simply maturing. It’s growing and, dare I say it, blossoming. If that sounds a bit fem, my apologies, but it fits.

Quick note about that: I love how this movie centered on a female superhero without either making a big deal out of it or having to make men look weak in order to do it.

And on that note, I loved how we saw Nick Fury acting in the capacity of an agent, in his days before he became the mighty, conniving Director of Shield. We see him during the experience which inspires him to begin the Avenger Initiative, and he is pretty good at his job.

Seeing Clark Greg on the big screen again, however briefly, as a rookie Agent Coulson was a little treat as well. 🙂

The narrative was also a bit more intricate than many other superhero movies. Not only is Carol’s story told, showing, briefly, everything that made her who she is, but the heroes and villains of the story are not so clear-cut as usual. Even when the supposed villain turns out to have a most worthy cause, he’s not portrayed as being entirely innocent.

As for the true villain… well, it’s a liar, and an impersonator, and it craves the subservience of others, so it’s quite a good analogy for a devil. 😉

If I have one particular complaint about Captain Marvel, it’s how Carol’s story has only barely begun. There’s quite a bit more work for her to do, most especially in bringing a reckoning to the alien powers which have done so much harm. We see her rise, and her power, and she even throws down the gauntlet to her enemies, but it feels a bit… unfinished. It’s even a bit lackluster, when she drives the enemy away from Earth, and given the great explosions involved in that, this says something. It loses just a touch of the thrill and suspense, much like when we finally see exactly how Fury lost his eye.

Outside that, however, I generally found the movie to be a well-paced, well-told story, with action, intrigue, laughter, and tears. Captain Marvel will definitely be welcome in my library, and I can’t wait to see her with the Avengers in the upcoming Endgame. 🙂

5 Responses to Captain Awesome is Marvelous! …er, I mean…