I am looking forward to Gotham‘s series finale, and the next season of Agents of Shield, but, for this week, we just had the newcomer to the lineup, Cloak and Dagger, to regale us with tales of heroism and villainy, and a little blurring of the line between. Not bad! 🙂 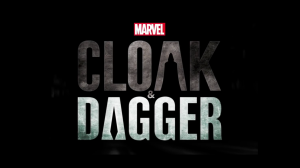 After the last episode left off on a cliffhanger involving the display of two Brigids, this one begins with Mina Hess experimenting on a most unfortunate mouse. She exposes it to the whatever-it-is that turns people into mindless Terrors, is probably the source of Ty and Tandy’s abilities, and which Brigid was exposed to when she became two people. As the mouse runs a frustrating maze and Mina opines on tape how her funds are running low, a freak power surge turns the lights off for a moment. When they come back on, there are two mice, identical, right down to the mark she put on the first, in the maze. And while she’s busy being stunned by the appearance of a second mouse, said second mouse attacks and kills the first. (a very unfortunate mouse)

That is all kinds of disturbing, ya know? To suddenly not be alone, but have yourself in front of you, coming to kill you, by ripping you apart. That is rather unsettling just to contemplate, and Brigid has a front row seat.

Ty, Tandy, and Brigid find themselves facing this other Brigid, who I shall simply call Mayhem from this point on because they hit that one over the head enough times to cause serious brain damage. Mayhem talks about finding and saving all these missing girls, and they can join her, but they better not get in her way. As they refuse, not wanting to be party to casual murdering, Ty gets them out before they become casually murdered. The boy’s powers are growing, but it obviously takes a toll on him.

Tandy, fierce and freaked out, wants answers, and with present parties unable to provide, they go to Mina, with her mice. She’s been experimenting, and successfully replicated the results of earlier, and she only lost three more mice in the process. Evidently, exposure to the mysterious chemical combined with a bit of fear results in a split of one into two. Brain scans indicate that the original loses all activity in the rage center of the brain, while the copy has activity exclusively within same center. So, it’s like all the rage and aggression gets pulled out and put into a new body, identical in every way, including memories.

Brigid was literally made into two people: one with all the aggression, and one more docile.

Mayhem, we learn in flashbacks, was after Connors at first. Of course, the man having been taken into the darkness, she can’t find him. She tracks down his old partner, who vouched for him and supported his story. It was an accident, yes, but still one they ducked responsibility for, and Connors convinced him to support an outright lie in exchange for a promised favor. That favor was never repaid, and the man was drummed out of the force a year later. He’s regretted it, but only because of what happened to him. Mayhem picks up on that, on how he makes himself the victim as he tells the story, and it touches a nerve. Which, touching the nerve of a super-strong incarnation of rage who can slice throats open with her fingernails… not healthy. She’s angry, and without remorse, when she cuts him down.

Interesting detail there, her search for Connors took her in proximity of a meeting wherein Ty’s mother voted down a measure to have the police keep investigating something, I missed what it was about, but there’s clearly someone holding power over her. Perhaps by threatening her family?

So, Mayhem’s investigation took her looking for Ty, for help, which took her to his old adviser, the priest, who quits being a priest and becomes a drunk on the streets instead. She seems to use him as a confessor of sorts, someone to talk to about her troubles and get advice. It’s after a conversation with him that she gives up on Connors and starts looking for the kidnapped girls instead.

As that search is probably going to leave a trail of bodies, Ty, Tandy, and Brigid are playing catch-up, starting by going to her place. Brigid just needs to think of what she would do, and she picked out a place to hide out for awhile already. Mayhem went there, and apparently has the landlord cowed after a few months of interacting with her. They go in and find the maps and pictures and wanted posters all over the wall. Mayhem’s been a busy girl, it seems, and tonight is the crescendo of months of work. Brigid works it out with the playing-card trick she uses.

First it was the drug dealers in the club, who sell to the human traffickers so they can keep their victims subdued. Then it was the private ambulance company, who transport the girls all over the city, hidden in plain sight. Next up, it’s a shipping location, a pier that, at the moment, is on the news, in flames. Finally, Mayhem hits a strip club, a location where the sex trade can hide beneath a very thin veneer.

The trio in pursuit catch up to her as she’s wreaking… well, mayhem on the men inside, her targets. Brigid guards the entrance while Ty and Tandy go in. Now, they have abilities, which gives them a little edge, but they’ve never gone up against someone else with abilities, especially someone with increased strength. She basically bats them aside with about as much effort as it takes to brush aside a fly. Then she heads out and walks past Brigid, who, lacking her rage, is unable to pull the trigger.

There’s something to be said for rage, at certain times. When it rules you, you do terrible things, things you shouldn’t. But to lack it entirely is to lose one’s fangs. Any virtue taken to far becomes a vice. We are told we need to rule our rage, but that involves having rage to rule in the first place.

And for all that Mayhem is out of control, she got info, which she gave to Tandy, leading them to rescue a number of girls… after Mayhem had come, killed all their captors, and left, that is.

Tandy is conflicted at this point. Though she doesn’t like all the murder, Mayhem is getting more results, much faster, than anything they’ve done up to this point. Everything they’ve been doing is pointless if it doesn’t get the job done, which it never does. What if her victims deserve it, as those who traffic in other people’s bodies surely must? How can they argue against methods when it gets results?

Ty has a simpler view of it: shooting first and asking questions later, that is the attitude that got his brother killed. And for all the talk of helping people, the girls Mayhem “rescued” are not all right after seeing what she did. So, methods matter.

Now, this time, Ty and Tandy manage to get ahead of Mayhem a bit. When the girls can’t talk much, Tandy touches one, to find she has no hope, and then Ty touches her, entering the nightmare that tells him where they were taken. They go, and manage to quickly and carefully distract all the guards with a flash of light and get all the captive girls out. Brigid has her hands full seeing to them, Ty is getting exhausted, and Tandy… is almost captured. Having her step out like that felt like they were stretching things a bit, but, ok. Mayhem shows up in time to run the man over with a semi. Then she storms the place, slaughtering the criminals. But there’s one, barely more than a kid, really, who Ty chooses to save.

In that moment, he is practically darkness itself, a shadow that absorbs the gunfire and draws Mayhem into itself.

Tandy is just a little surprised by that.

Mayhem finds herself in darkness, approaching a gas station, I think, where she finds a fridge that has the corpse of her boyfriend in it, grinning and talking about pancakes.

This show does not hesitate to unsettle, ya know?

So, we have rescued girls, some of them in better psychological condition than others, dead or subdued criminals, complex questions about right and wrong and how best to save the world, Brigid divided into two, and Mayhem in darkness. Oh, and people are now seeing what Cloak and Dagger can do, and live to tell of it. That could get interesting!

This entry was posted in This Week on TV and tagged Cloak and Dagger. Bookmark the permalink.